Injuries to Northwestern's two most hyped players, RB Venric Mark and QB Kain Colter, could have caused the Wildcats to drop a game on the road against Cal. But Trevor Siemian and Treyvon Green filled their cleats admirably, saving NU's offense.

You're on the road. It's a hostile environment. Because you're on the West Coast, the game is way later than you're used to. The team you're playing runs an up-tempo system unlike anything you'll see all year, and because they have a new coach, you're the first team ever facing their look.

Already daunting enough. But then, your starting quarterback and your star running back go down with injuries. Great way to start the season!

The sportswriting cliche is to say that a lot of teams would fold in that scenario, but that Northwestern was resilient. This is the argument made by people who think win-loss records are important for baseball pitchers instead of looking at whether or not baseball pitchers pitch well. 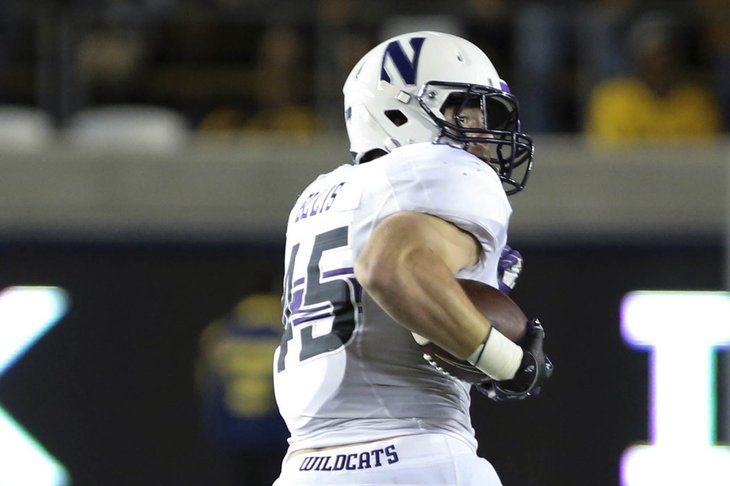 Sippin' on Purple was on the scene in Berkeley for Northwestern's season-opening win.

But Northwestern didn't manage a win without Kain Colter and Venric Mark because of moxie or any vague buzzword. I'm sure they have intangibles and THE WILL TO WIN™, but Northwestern won because the dudes next in line to step up are talented and were ready. And that says a lot about where this team and this program are right now in 2013.

We've long known that Trevor Siemian isn't QB2. He's QB1B. But Saturday night, he was forced into full-time duty, with Colter leaving the game after the first series.

He didn't play perfectly. He tossed a pair of picks, uncharacteristic for a guy who entered the game who threw picks on just four of his 244 attempts as a freshman and sophomore. As Inside NU noted, a more one-dimensional offense often left NU wanting in short-yardage and goal-to-go situations, which explains why NU ended up kicking three red zone field goals.

But he played well enough for Northwestern to win. 18-for-29 with 276 yards? Yes, that's quite fine.

Unlike Siemian, Treyvon Green kinda came out of nowhere here. We were a little bit harsh on Green in our post on him, seeing the junior as a big third-stringer who could help out in short yardage situations, but not as somebody who would or should see much action with Mark and Mike Trumpy in the mix.

He was a dang revelation Saturday night. With Mark some combination of injured and not particularly effective, Green got the lion's share of carries, and did work. He busted through for a 55-yard carry on NU's first series and ended up with 130 yards -- a career high, and nearly twice as much as the 73 yards he managed in the entirety of last year -- and two touchdowns. He didn't dance around, perpetually plowing forward, and moved some bodies after hits. And his performance is even more impressive when you consider that Colter, a better QB for a running style of offense, wasn't in the game.

Trev-and-Trey is not Northwestern's answer.

The Wildcats are ranked No. 22 because of Mark and Colter, who are truly dynamic out of the option, and the ability to be multivalent offensively is a big part of why the team is successful. If 2013 is going to be the season NU fans want it to be, both of those players will need to be healthy. Colter seemed to have a concussion, which hopefully won't cause him to miss any playing time although we hope NU takes full precaution with something as important as a med school hopeful's brain. Mark actually played up through the fourth quarter, and his injuries appear to be of the nagging variety, which causes more concern. This was a horrendous way to start the season, but at least it reinforces the fact that while the definitely-existent deity that hates Northwestern football has really slacked in recent years, he sometimes manages to do things besides slapping the snooze button every once in a while.

But it's incredible to know that if called upon, they're good. Historically NU has rarely had capable starters. Now it has capable backups. And with Colter and Mark moving on after their senior seasons, it's also nice to know that two guys who will be important in 2013 are able to contribute in 2013.

Here's to Siemian and Green, and hopefully smaller, but equally effective roles for both in the future.