Share All sharing options for: Zone Read and Passing Game Key for NU vs. Ohio State

Over the past week, as Northwestern has zeroed in on Ohio State, the discussion has been overwhelmingly focused on how NU's defense can stop the Buckeyes' powerful offense. But the truth is, even if the Wildcats' defensive tackles and corners have the best performances of their careers, Ohio State is still going to score. The offense, led by Braxton Miller and Carlos Hyde, is the strong suit for this team, which comes into this game averaging 48.2 points per game, good for sixth in the nation.

The only way NU can win this game is to keep up in a shootout, and although the Buckeyes have a solid defense, led by All-American linebacker candidate Ryan Shazier, All-American corner candidate Bradley Roby and star defensive ends Noah Spence and Adolphus Washington. However, OSU does have holes that the NU offense has the personnel to exploit, particularly in the power running game and the passing game. Those holes were evident in Ohio State's game against Wisconsin and allowed the Badgers to put up good numbers through the air, despite a somewhat suspect passing offense.

For NU, the gameplan is simple: get the running game going early, likely with the zone read, then go to the air to take advantage of an OSU defense that will sell out to defend the run.

People tend to mistake the zone read for a trick play or an East-West-focused play, but while it does help spread the field — spreading the field is always key to the Wildcats' offense — it's actually meant to run the ball North-South, as explained by Chris Brown of Smart Football. NU, like Oregon in that link, runs a lot of inside zone. Getting those plays to work on Saturday will be crucial to beating Ohio State.

Heading into this game, Ohio State was focused on making Wisconsin throw the ball. The Badgers have one of the best rushing offenses in the country and a suspect passing game. I'd imagine it will be a different gameplan for NU — the Wildcats will have to earn more of the respect in the run game. However, if NU can earn that respect — and with Venric Mark back, it certainly can — the Wildcats can learn a lot form OSU's gameplan against Wisconsin.

OSU's defense did an outstanding job defending perimeter runs thanks to its all-around team speed and strong group of linebackers. However, the Buckeyes' defense tackles have been suspect. The Badgers weren't all that successful running the ball up the middle, either, but that's because the linebackers were forced to respect the run game and come up in run support. That opened up the play-action pass and made the usually suspect Wisconsin passing game look pretty good. Here's a perfect example from the first quarter: 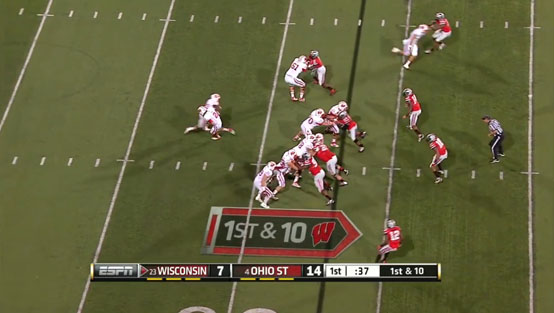 As you can see, all of the linebackers are flat-footed, waiting for the run. They expected to be able to defend the pass even by selling out to stop the run, since Wisconsin only has one star receiver — Jared Abbrederis. (NU, on the other hand, has plenty of capable receivers). 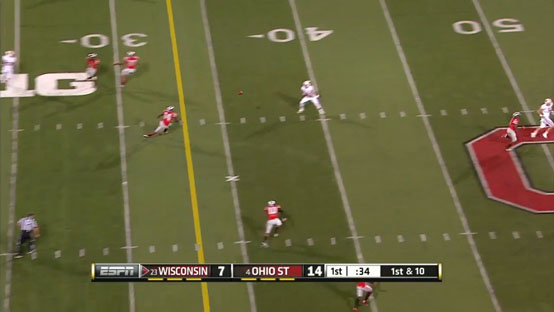 However, the Buckeyes were in zone coverage, and since they were all paying so much attention to stopping the run, they left Abbrederis wide open in the middle of the field. Really, OSU only needed one linebacker to fill the gap and stop running back Melvin Gordon, but the respect in the running game kept the linebackers hesitant and left OSU vulnerable to play-action. It also led to Abbrederis ending up with 207 yards on 10 receptions — a whopping 20.7 yards per catch.

How it Relates to NU

In many ways, Wisconsin and Northwestern run very different offenses. For starters, the Badgers run a pro-style offense and the Wildcats run the spread. However, both teams want to establish the running game and use that as a strength to neutralize the defense's strength. Wisconsin used play-action to its advantage by keeping the linebackers flat-footed, and that's he same kind of thing NU will do with the zone read. Since Kain Colter is always a threat to run, and since he almost always makes the right read, Ohio State's defenders can't crash toward the running back and will need to stay put before they start their pursuit. In other words, they'll have to wait for the play to come to them, rather than attacking the play from the beginning.

Not only does the zone read create more yards for Colter and Mark, but it can help open up the passing game, as well. NU doesn't do a lot of play-action passing with the zone read, but it can be deadly with throws up the middle, as (ironically) this Ohio State play shows.

Even without the play-action pass from the zone read, if the running game gets going with the zone read, the passing game will open up for NU, as the linebackers will be forced to constantly think about the run game, leaving room for open pass plays over the middle of the field. That's especially true now that the Buckeyes are missing star safety Christian Bryant, who is out for the year after sustaining an injury in the Wisconsin game.

If NU can get the running game going without the zone read — it's certainly possible, considering defensive tackle is OSU's weakness — then there's a chance we'll see more of Trevor Siemian than we have in previous games. There are plenty of ways to open up the passing game, but it all comes back to establishing the run, whether with zone reads or inside zone runs without the read.

Obviously, this is all a tough task, and the Wildcats may end up struggling to get the run game going. However, if they can force the Buckeyes' linebackers to come up in run support, that will open up a lot in the passing game, and can ultimately be the key to an NU win.