Northwestern's game against Ohio State Not "Just Another Game"

Share All sharing options for: Northwestern's game against Ohio State Not "Just Another Game" 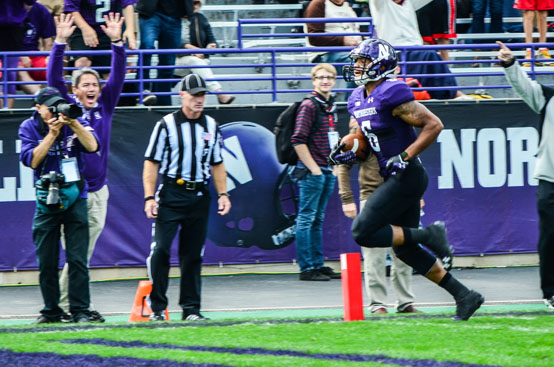 EVANSTON, Ill. -- Midway through Northwestern’s Monday press conference, in the week leading up to a massive homecoming weekend game against No. 3 Ohio State, quarterback Kain Colter tried to contextualize the challenge at hand.

“We don’t want to say that it’s just another game, but it almost is,” Colter said. “They’re not on our side of the division now…I’ll leave it at that.”

This is an important point. There are other games on the schedule that matter more for Northwestern’s Big Ten championship aspirations. November contests against Michigan and Nebraska, for instance, will likely decide the Legends Division race. Winning against Ohio State would represent one Big Ten victory against a team from the other division – that’s it.

Only it’s not. Not even close.

For the first time since Pat Fitzgerald inherited Northwestern’s head coaching job in 2006, the Wildcats are widely regarded as a totally viable, 100 percent legitimate, conference championship contenders. Months removed from a head-turning 10-win season, Northwestern entered 2013 as one of several teams expected compete for a division title. Most predictions had them finishing in third place, behind Michigan and Nebraska; a few people had NU slipping as low as fourth.

Four games into the season, it’s hard to argue Northwestern is not – at this very moment – the frontrunner to reach Indianapolis from the Legends. Michigan had to scratch and claw to get past MAC doormat Akron, then barely escaped a woeful UConn team that just fired its head coach. Nebraska’s defense has somehow managed to fall short of its already deflated preseason expectations. And Michigan State, for all its defensive strengths, continues to stretch the boundaries of self-destructive offense.

That leaves Northwestern, riding a surge of momentum it probably doesn’t deserve after two sluggish efforts against inferior competition. Pollsters appear to be buying in: the Wildcats ranked 15th in the latest edition of the USA Today coaches’ poll, the first time NU has cracked the nation’s top-15 since 2001. A win over No. 3 Ohio State would likely vault Northwestern into the top-10.

Moving up in the rankings is one thing. There’s a larger perceptual goal at stake.

Beating Ohio State won’t move the Wildcats closer to their goal than, say, beating Michigan or Nebraska or Michigan State. What it will do is deliver one resounding statement to all the critics who still believe the Wildcats are some cobbled-together group of overlooked two-star high school prospects and misfit toys – that “cute” little team that clings to its academic ideals but shouldn’t dare try and compete with the rest of the Big Ten in football. Why? Because they’re Northwestern.

That team hasn’t existed in Evanston for years, loath as much of the nation might be to admit it. Northwestern has spent the past few seasons proving as much under Fitzgerald’s watch, as a slow, incremental rise to Big Ten contention, culminating in last year’s 10-win season, unfolded. Recruiting prowess improved apace. The administration bought in. Plans for new facilities were finalized. Fitzgerald’s salary multiplied.

This is not the Northwestern that played Ohio State in 2008 – the one that, after a promising 3-2 start in Big Ten play, was steamrolled, 45-10, at Ryan Field. This team, equipped with better talent and athleticism, is a few steps ahead on the program development curve.

“This is why you come to play Big Ten football,” defensive end Tyler Scott said. “This is where you want to be at, and this is where we want our program to be at.”

So now, after years of underdog status, Northwestern is expected to do big things. They are hosting Ohio State in primetime on ABC (hours after College Gameday airs live from campus), and not everybody thinks it will be a blowout. Northwestern is a legitimate division frontrunner and conference championship contender, a team Ohio State is by no means guaranteed to beat, much less demolish. And this time around, five years after the Buckeyes reminded a then-7-2 Wildcats team just how far they had to climb before entering the league championship discussion, Northwestern is playing for something else entirely.