Northwestern basketball wearing special uniforms vs. Illinois, I don't think they're as stupid as you do probably

NU has no basketball tradition, so we don't mind letting the players have fun with an ugly-ish jersey.

Share All sharing options for: Northwestern basketball wearing special uniforms vs. Illinois, I don't think they're as stupid as you do probably

My heart dropped when I saw this:

Northwestern’s uniforms are going to get #ARMOURED on Sunday. Stay tuned. #B1GCats pic.twitter.com/WOUmAmOfyg

OH NO. WE'RE GOING TO WEAR "CHICAGO'S BIG TEN TEAM" JERSEYS AGAINST ILLINOIS AND LOSE BY 132.

My heart dropped even further when I saw this: 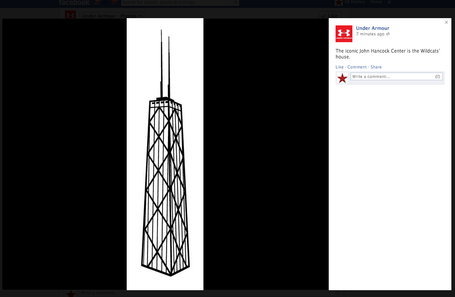 "The iconic John Hancock Center is the Wildcats' house." THAT'S NOT TRUE ON SO MANY LEVELS.

So, my point is, this could have been really bad. Not "our cool American flag uniforms were misinterpreted as featuring soldier blood and then people thought we did it as a money grab even though we gave a lot of money to charity" bad, but, still, really bad. 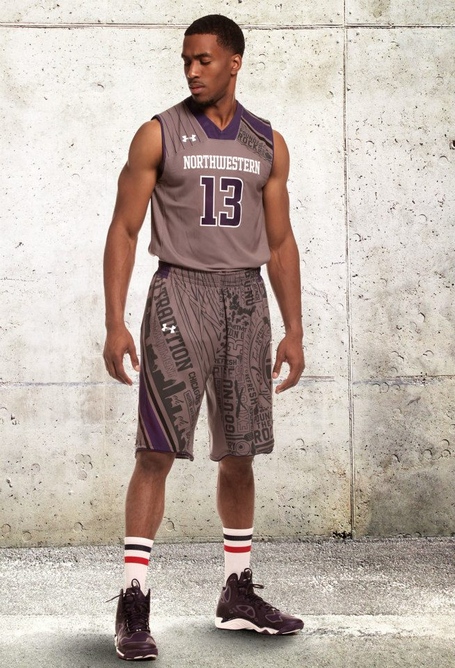 The theme, it seems, is "BE A PLAYER," as in, Under Armour asked the players what was important to them, and they put it on there. Everything from Chicago -- the skyline and such -- to... barbeque? 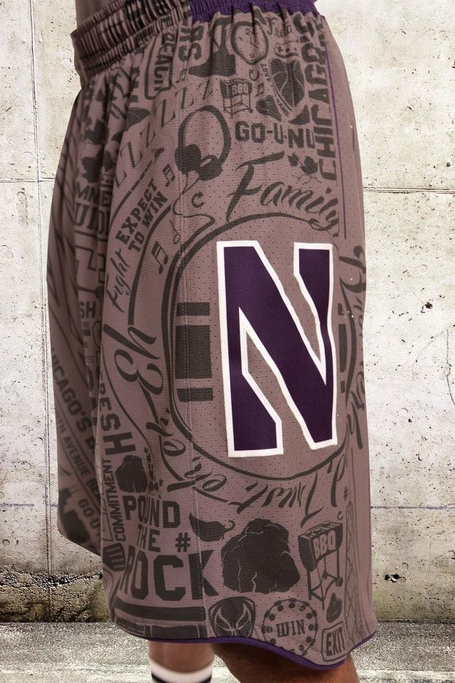 "What's important to you?"

(Two weeks later in the Under Armour offices)

"Sleep? SLEEP?!!?! HOW DO WE REPRESENT SLEEP IN A COOL WAY ON A JERSEY"

Also spotted: EXIT, a luchador mask?!?!?, a hashtag a chili pepper - spicy food, I guess -- an old-school Nintendo logo, and The Rock, I think. (The Northwestern landmark.)

The internet has made its say on these jerseys clear, but allow me to defend them.

So, aesthetically I don't think these jerseys are very pretty. They stop short of being horribly ugly, though. That's typically my No. 1 concern here.

The No. 2 concern is "is this a stupid message." The message is "we let our kids design a jersey." I don't have a problem with that. My problems with the Chicago's Big Ten Team think have been pointed out a trillion times -- we're probably not -- but we pitched our stake to that years ago, and there's no use griping about it now. (Upshot: it seemed like a good idea for a bit, we sold some tickets, then lost some football games, and now it's a joke forever. At the end of the day, we're not Illinois football.)

The third area that bothers people when someone has a gimmick jersey is TRADITION. Why are they wearing that dumb stupid new thing?

Here, Northwestern is blessed with the fact that NU has no tradition. (Despite the fact that TRADITION is written in big letters on the pants.) We've made zero NCAA tournaments. Our uniforms have been changed every two or so years since I started following the team, and probably for decades before that.

What Chris Collins and NU are offering, if you'll forgive me, is a chance to make tradition. You know, make the NCAA Tournament. Make people care about Northwestern basketball. Hell, draw something and it'll end up on a jersey.

This is a terrible, awful, no-good lost season. And yet Chris Collins has managed to attract some good recruits. If he needs to wow recruits -- and let's be honest, that's who jerseys are for -- by letting NU wear something gimmicky to prove to recruits that they can craft something cool at NU, I'm all for it.

Even if the internet has jokes.

(BTW, are they gonna wear those socks? Those are awesome socks.)