How bad is Northwestern's 2013-14 basketball team?

Share All sharing options for: How bad is Northwestern's 2013-14 basketball team?

No one expected Northwestern to win at Iowa Thursday night. The Hawkeyes are one of the three or so best teams in the Big Ten: they rank no. 13 in Ken Pomeroy’s team ratings; play top-20 efficiency offense and defense; use a versatile and athletic 11-man rotation; and have yet to lose this season at their obscurely designed home arena.

You don’t need a description of why Northwestern is bad, because the only important thing to know in light of last night’s 93-67 obliteration is exactly that: The Wildcats are bad. Really bad. So bad that a prominent beat reporter is advising fans that want to be entertained to pull up the high school schedule of the team’s best incoming recruit. If you are someone whose weekly entertainment is tied to the performance of the Northwestern basketball team, this has not been a fun couple of months. This team is hard to watch at times. So yeah, the opposite of entertaining.

This being Northwestern basketball, blowout losses and an utter failure to even be competitive against conference opponents are not new phenomena. This program’s history is defined mostly by futility. As someone who hasn’t followed Northwestern basketball long enough to understand how woeful it once was, or how the worst Wildcats teams compare to the 2013-14 group, I didn’t want to merely rehash one of the many conclusions Northwestern fans have made about this team (Namely: “This team can’t compete without the Princeton,” “We have a bunch of guys who belong in the Valley trying to hack it in the Big Ten, and it’s not working,” “Collins is in over his head.”)

So I looked back a few years to find a pitiful Northwestern team, one so bad it would make this one look great. I narrowed my search to the past 11 years so that I could use statistics from Pomeroy’s website, which began tracking tempo-free data in 2002-03. I realize this restricts the scope of my analysis, and that there were some terrible Wildcats teams – including the 1990-91 group that went 3-23 and 0-18 in the Big Ten under Bill Foster – that pre-date the so-called “tempo-free era.” But I felt using advanced statistics was important to illustrate how this team’s performance compares to a previous team’s, and I wouldn’t have been able to do that had I chosen a team from before 2002-03.

Also, this comparison intends to shed light on where Northwestern's numbers could be in relation to the 2007-08 team's by the end of the season. The Wildcats have not played their entire schedule yet, so the numbers in the chart's middle column below do not reflect a full season's body of work. They do for the 2007-08 team, in the right column. 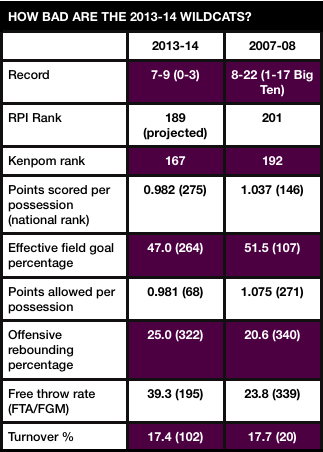 The 2007-08 team was abjectly bad on several fronts. It won just eight games and didn’t notch its first Big Ten victory until February 26. It gave up more points per possession (1.075) than it scored (1.037), which, as you can probably guess, is not a good distinction for a basketball team to own. As was the case with most of former coach Bill Carmody’s teams (dating to ’03, all but two of them ranked outside the nation’s top 80 in defensive efficiency), it was putrid on the defensive end.

It also underperformed in two of the four areas statistical guru Dean Oliver deems most important to defining how good or a bad a team is. The 2007-08 Wildcats posted respectable effective field goal and turnover percentages, but struggled to get to the line consistently and offensive rebound.

This season’s team could well finish with the same record as the 2007-08 tire fire. Pomeroy projects the Wildcats to win three conference games, which would put them at 10-21 heading into the Big Ten Tournament. That may be possible, but not if Northwestern doesn’t improve its offense, which is far worse (gauged by both eFG% and PPP) than the 2007-08 team’s was. This team is also struggling to rebound its own misses.

These numbers will change between now and March, so it’s possible the 2013-14 Wildcats, whose 167 Kenpom rating trumps the 2007-08 team’s 192, will close the season looking even more terrible than the terrible team I’m comparing it with. Against conference competition, the Wildcats are scoring a ghastly 0.866 points per possession and allowing 1.26. If Northwestern can’t improve those numbers, its efficiency profile will look worse and worse as the season rolls on.

(On a side note: the RPI is not an accurate metric for gauging team performance, and since Northwestern won’t earn at at-large NCAA Tournament bid this season, it’s pretty useless for the purposes of this statistical comparison. But I included it anyway, just in case you still use RPI to gauge the quality of teams’ resumés.)

Considering how strong the Big Ten is this season, the probability Northwestern improves, or even maintains its current statistics is probably slim. The Big Ten is a brutally tough league in 2013-14; whereas it ranked fifth in Pomeroy’s league ratings in 2007-08, it comes in at no. 1 by a considerable margin this season.

The bottom line is that the Wildcats have the chance to be bad not only in comparison to other 2013-14 teams, but historically egregious. Oh and guess what? Northwestern will host Illinois on Sunday (wearing these uniforms). Will it notch its first Big Ten win? Probably not. Pomeroy gives it a 34 percent chance.