This season has never been the focal point when discussing Northwestern basketball — it's always been about the future. However, as the Wildcats have floundered through the season, there has been some criticism that the coach Chris Collins should be doing more with the talent that he has. Heading into the year, Collins said he thought he could win with this group, and he seemed to have a solid offensive plan that would mix elements of Bill Carmody's Princeton offense but still show glimpses of the future.

"We're trying to get a lot of cutting and movement," Collins told the Chicago Tribune. "We're not a heavy isolation team or a pick-and-roll team. That is not our makeup. We have guys who can post and can shoot, lots of hybrid-type players."

That sounded like a great idea, and it probably would be, but unfortunately, Collins hasn't stayed true to that plan, and NU's offense has struggled mightily this year. The 93-67 loss to Iowa highlighted the biggest issues.

The Hawkeyes can go 11-deep and they're long — two rotations players apiece are 6-foot-6, 6-foot-7 and 6-foot-9. Simply put, NU didn't match up. Cuts and superior ball movement could have helped the Wildcats get some good looks, but instead they curiously went isolation on 15.48 percent of plays. That's not a winning formula against a top team that plays solid defense. Still, the Wildcats are running isolation on 7.3 percent of their possessions, while they're cutting just 4.5 percent of the time. The results have been what you might expect, as NU is scoring just 0.826 points per possession on isolations. And not surprisingly, the Wildcats are winning more when they play less isolation:

There's a common trend here: when NU faces better defenses — with the exception of Wisconsin — it generally runs more isolation, presumably because the players can't figure out how to get open shots and result to a prayer on isolation. We put together a chart comparing the isolation rate and opponent's defensive efficiency, excluding defenses below the KenPom top 250, since NU and most other teams can basically do whatever they want in games like that. 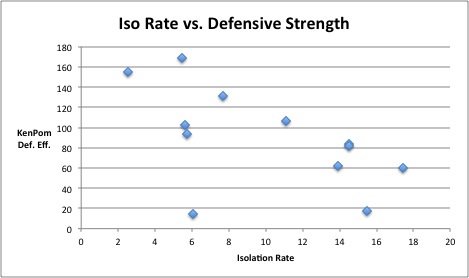 Generally, NU has gone isolation more when the competition has been tougher. However, those are the teams that NU can't afford to be playing isolation against.

NU is going to be hard-pressed to find offense this year, but in order to be successful, the Wildcats need to revert to the original plan — cut and move effectively off the ball, rather than try to win off isolation.