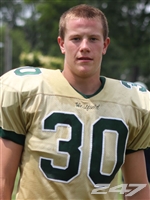 On the night before Jacob Robinson and his family drove to Northwestern for the Wildcats’ junior day, the three-star defensive end from Westfield, In., received a Facebook message from wide receivers coach Dennis Springer. Springer told Robinson to stop by head coach Pat Fitzgerald’s office before the other 15-20 visiting juniors met as a group.

Robinson and his family had no prior knowledge of what happened next.

“He offered me a scholarship,” Robinson said Monday. “[My parents] were both shocked and very excited at the same time, same with me.”

Robinson has been interested in Northwestern for at least a year. Defensive coordinator Mike Hankwitz visited him at Westfield High School in the Fall, but he hadn't met Fitzgerald before Saturday. The head coach made a strong first impression.

“Enjoyed talking to him,” Robinson said.

Robinson’s first visit to Northwestern was an enjoyable one. He toured the campus and football buildings and met with defensive line coach Marty Long, who broke down the Wildcats’ defense for Robinson.

“It was a very nice campus, along with a very nice school,” said Robinson, who has a 3.5 GPA.

Robinson said Hankwitz, Fitzgerald and other Wildcats coaches like him because of the intensity he plays with and believes he would make a good fit in Northwestern’s four-man front – the same alignment he plays in at Westfield, where in his junior season he racked up 62 tackles and 1.5 sacks while leading his team to a 12-2 record.

While Robinson has long dreamed of playing in the Big Ten, he said he will listen to any school that’s interested in him, regardless of the conference it inhabits. Indiana and Toledo have already extended him scholarship offers. Of the schools that are recruiting Robinson but have not offered, he said Michigan State, Nebraska and Minnesota might be closest to doing so.

It’s likely that Robinson will be back in Evanston for a spring practice or two in February or March. He does not plan to make a decision anytime soon.