If you're a frequent user of #SportsTwitter, you should know by now that James Franklin may or may not leave Vanderbilt to take the Penn State job. Such is the nature of Twitter and the Internet these days, but regardless of where Franklin ends up, the fact remains that he is one of the most sought after coaches in college football.

Over the past three years, Franklin has turned Vanderbilt from perennial SEC cellar dweller to a respectable program, so at face value, it's no wonder so many programs are giving him a call when they have head coach openings.

However, I've been skeptical of Franklin. I think he can be a fine coach, but nothing about his tenure at Vanderbilt screamed "great," which is what a lot of my Twitter feed suggested. His teams only beat four teams with winning records and perhaps the program's best win was this year against a beat-up Georgia team. It also didn't help my perception when the Commodores decided to cancel non-conference games with Northwestern and Ohio State. They've padded their win/loss records with games against weak non-conference teams and taken advantage of the down years of the SEC East. That may sound harsh, but to me, beating mediocre/bad teams that can consistently make the Music City Bowl isn't "great," even at Vanderbilt. Too often, we assume a coach who made a bad program decent can make a traditionally strong program great, and that isn't necessarily the case.

One thing regarding the Franklin love that caught my eye is his recruiting accolades. Franklin has assembled some impressive classes at Vanderbilt — especially given program's previous classes — and it's widely assumed that he could kill it at a bigger school with greater national cache. That description sounded a lot like the one many people gave Pat Fitzgerald before this season's meltdown.

The Fitzgerald-Franklin comparison is an interesting one. Franklin spent much less time at Vanderbilt, but the two recruit against each other very heavily and come from similar situations at academically-minded schools that don't have the tradition or fan base to wow recruits. So I decided to see how they stacked up against each other head-to-head in Franklin's three full classes at Vanderbilt. During that time, 18 players with both Northwestern and Vanderbilt offers chose one of the two schools. 13 chose Northwestern, while five chose Vanderbilt. 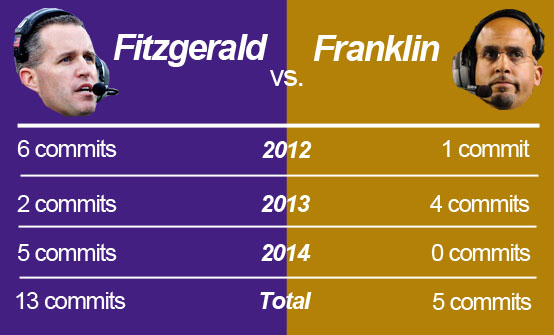 Given what I've followed in recruiting, I expected Fitzgerald to have the advantage over Franklin, but I didn't expect the gap to be as wide. While Franklin beat out NU in 2013, the was blown out by the Wildcats in 2012 and 2014. Franklin might be getting all the job offers right now, but when it comes to bringing in talent, Fitzgerald has done a better job when their tenures overlapped. And the numbers also suggest that while Franklin may have been "great" by Vanderbilt standards, he certainly wasn't when compared to a peer institution that offers many of the same challenges.

This isn't to say Fitzgerald will be chomping at the bit to have Franklin in the Big Ten — recruiting at Penn State is undoubtedly easier than recruiting at Vanderbilt. However, if Franklin is to be revered for his recruiting skills, perhaps Fitzgerald should enjoy the same kind of attention, too.