Has Northwestern's offensive line finally figured it out?

The Wildcats looked much better against Penn State.

Share All sharing options for: Has Northwestern's offensive line finally figured it out?

The past few years, I've written a lot about Northwestern's improved offensive line recruiting. The Wildcats have added depth and a lot of talented players to fit their typical zone blocking scheme, and with so much returning, this looked like NU's year.

Of course up until the Penn State game, the line made me look stupid. Part of the problem was that the coaches were using smaller linemen who were recruited for zone blocking schemes in the same way Wisconsin uses its linemen, which is a misuse of talent. You can't expect players to be successful at something you did't recruit them for. But even when the linemen were asked to perform tasks well within their skill sets, they struggled. The pass blocking wasn't there, and the run blocking was even more atrocious.

This failed run against Western Illinois illustrates that perfectly.

Brandon Vitabile gets blown off the line, Geoff Mogus leaves the defensive tackle way too early to block upfield and Paul Jorgensen can't block that same DT after Mogus leaves him. The result is a busted play. Too often in the first three weeks, the offensive line ruined the ability for the offensive skill players to make plays. But against Penn State, that changed.

Even without reviewing the tape, it was obvious that pass protection had improved, from the running backs to the offensive line. The line allowed just one sack and no quarterback hurries (though Penn State is awful at keeping that stat) after allowing a combined 8 sacks in the previous three games — and this all came against the best front seven NU had faced.

As Nate Williams wrote, more performances like this from the offensive line could get Trevor Siemian more comfortable, and maybe eventually he'll stop sailing passes and go back to the form he showed as a sophomore.

If the OL can continue to keep him clean, from the improvements we saw from the first couple weeks to now, I think Siemian can progress into quite the passer this year.

The run blocking was greatly improved, as well. It still has some work to do, but the holes were bigger and far fewer Penn State defenders were getting into the backfield. As we've seen, Justin Jackson looks like the real deal, and in the fourth quarter against Penn State, he used his impressive field vision and great blocking by the offensive line to break off a nice run. 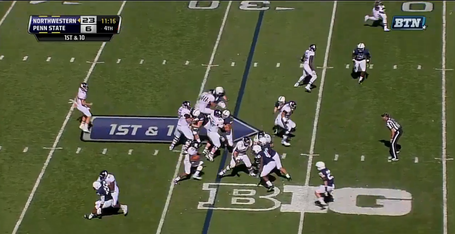 The problems with the line were evident even on that play. Mogus missed his man and had to backtrack to take him out of the play (he succeeded in that) and also fell down on a long run by Warren Long later in the game. But overall, and especially as the game progressed, there were a lot more positive plays from the offensive line against a pretty impressive defensive front.

Wisconsin presents a similar challenge. The Badgers have an inexperienced defensive front that has been good so far, ranking 13th in run defense efficiency, but other than LSU, it hasn't gotten much of a test.

If you look at just the season-long statistics, Wisconsin should be able to handle NU's rushing attack fairly easily. But perhaps the Wildcats' offensive line turned a corner in State College. Pat Fitzgerald better hope so, because that's the only way this season is going to get turned around.