The improvement of Northwestern's run game

Share All sharing options for: The improvement of Northwestern's run game

In the days since Northwestern knocked off No. 17 Wisconsin, much of the focus has been on Melvin Gordon's absurd box score line, and the Wisconsin offense and the Northwestern defense. We've even argued that despite Gordon's career high, Northwestern's run defense was one of the most impressive aspects of its performance Saturday.

But on the other side of the ball, Northwestern was surprisingly successful on the ground against a strong Wisconsin run defense. Even after Saturday's loss, the Badgers rank 21st in the nation -- better than NU in fact -- in defensive rushing S&P, a Football Outsiders measure of efficiency and explosiveness, and prior to Saturday, ranked 13th in efficiency. And as seen in the table below, Bucky had held its opponents well under their season yards per carry averages in every game prior to Saturday's:

Through five games, we had consistently remarked, oftentimes in a critical manner, that Northwestern had deviated from its traditional offensive identity in an attempt to become more of a power running team. As evidenced by the 3.3 yards per carry, that approach hadn't been effective. And especially against a Wisconsin team that boasted a considerable size advantage over the Wildcats, there wasn't too much to suggest that would change Saturday. But to some extent, it did, and the approach was effective.

One of the biggest reasons that this new offensive philosophy has gone from highly-criticized to respectable has been the play of the offensive line. One popular football phrase, especially with regards to running the football, is the offensive line's ability to "win at the point of attack." Northwestern hadn't done that consistently during non-conference play -- penetration by an opponents' defensive linemen had become a regular occurrence -- but it has now begun to.

Let's take a look at a few still shots of run plays from Saturday. Notice that on most of these plays, the position of the majority of the defensive players at the point of attack is either at the line of scrimmage or farther downfield, as opposed to in the backfield. 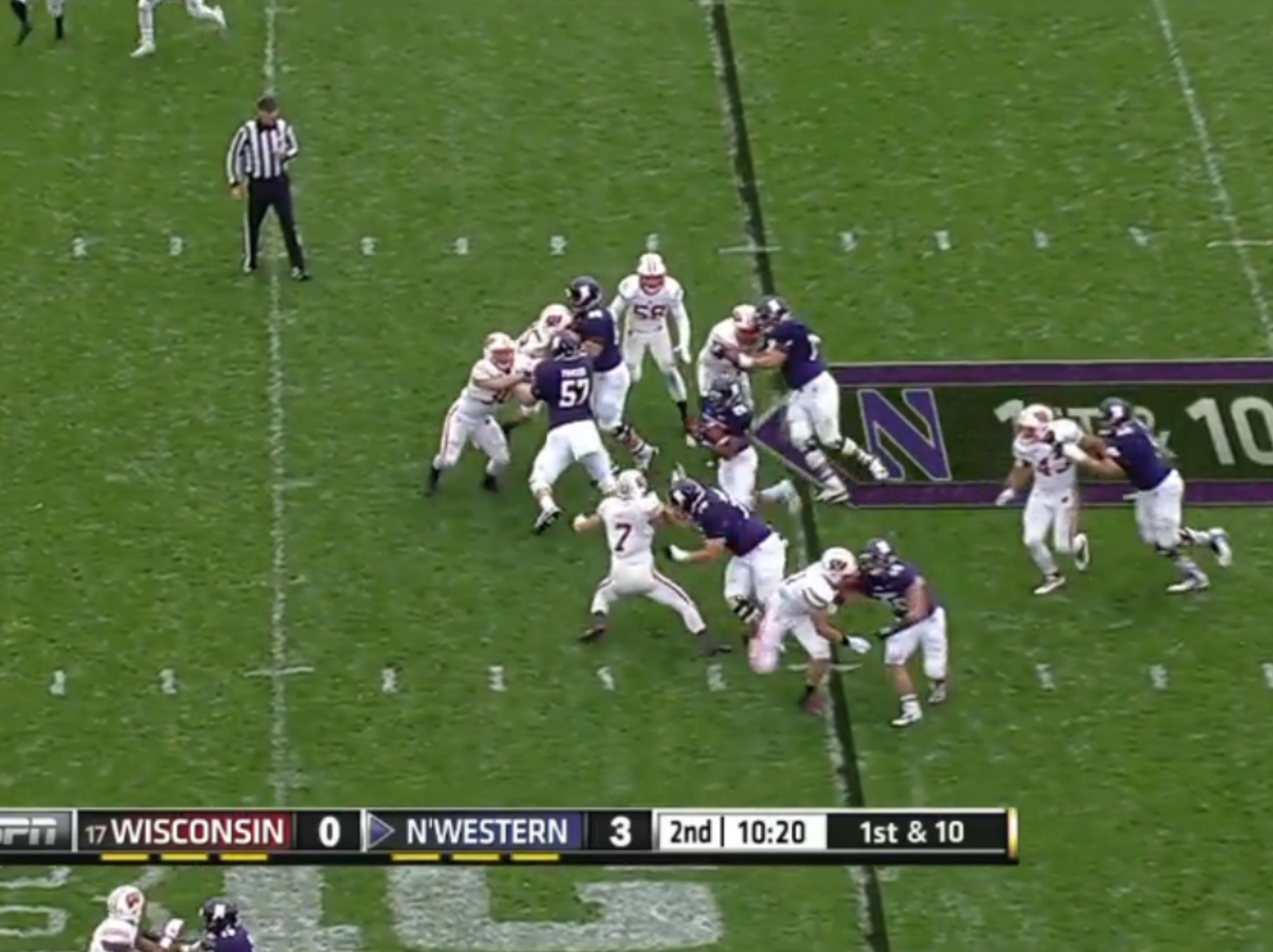 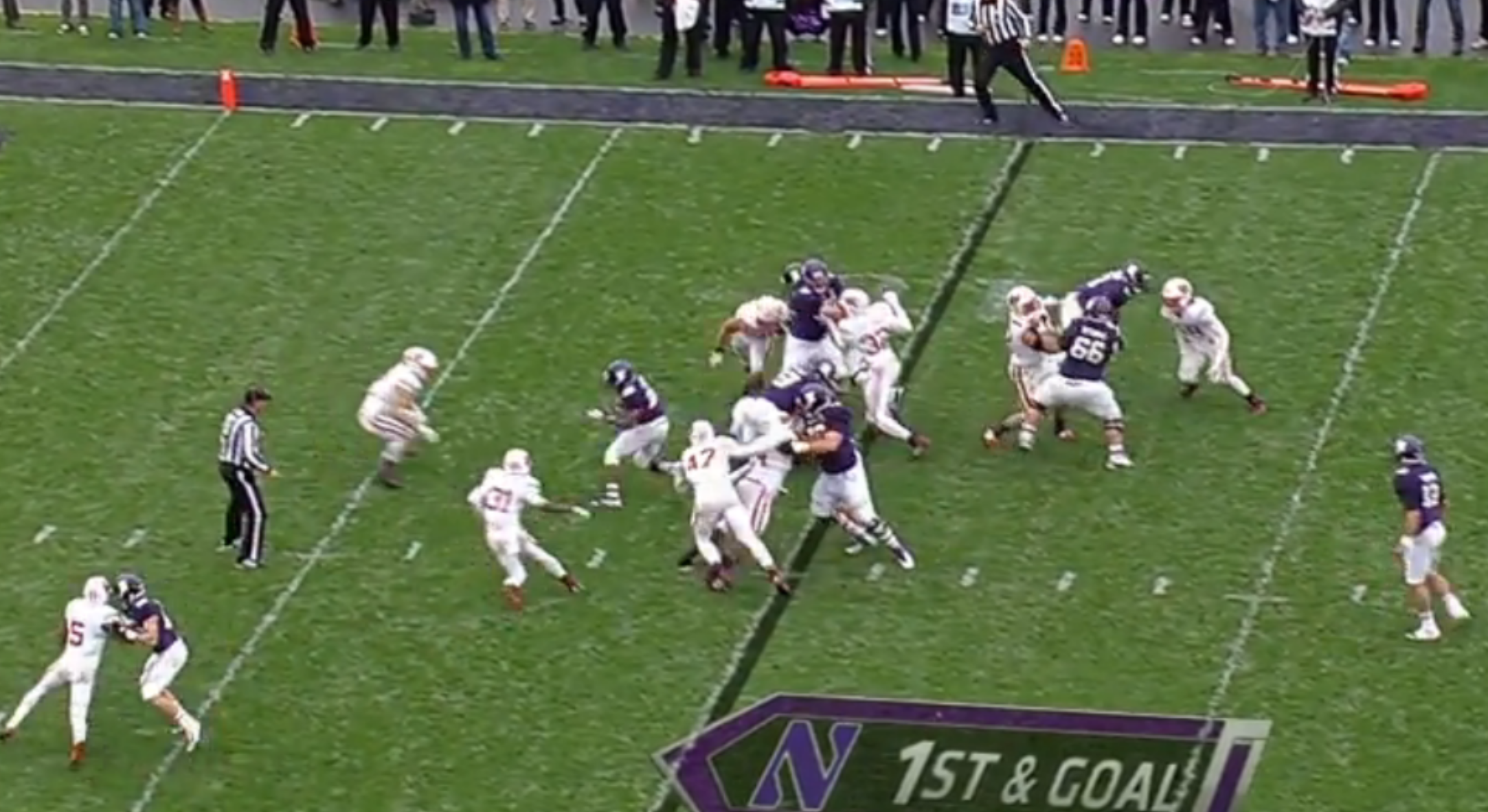 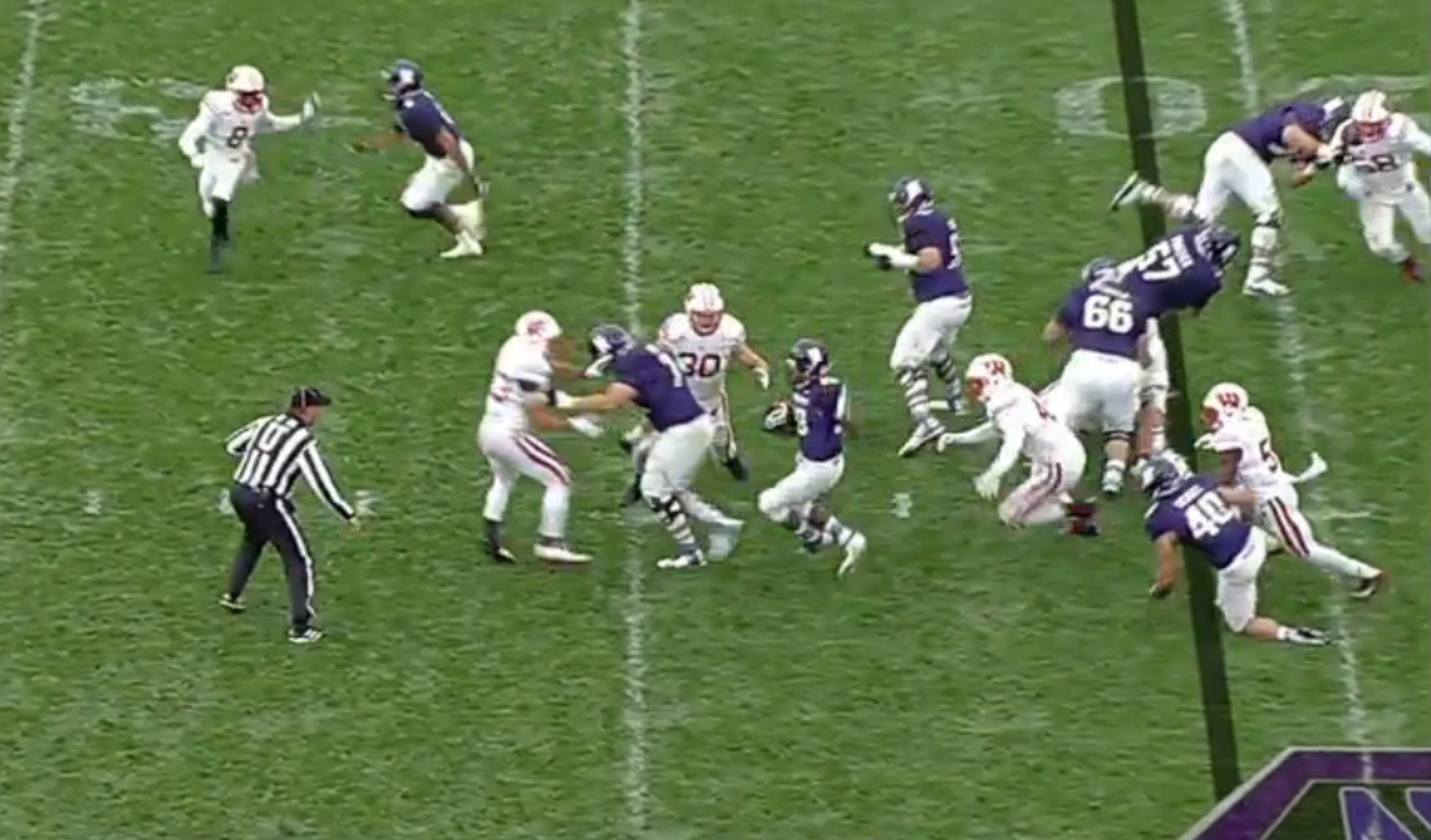 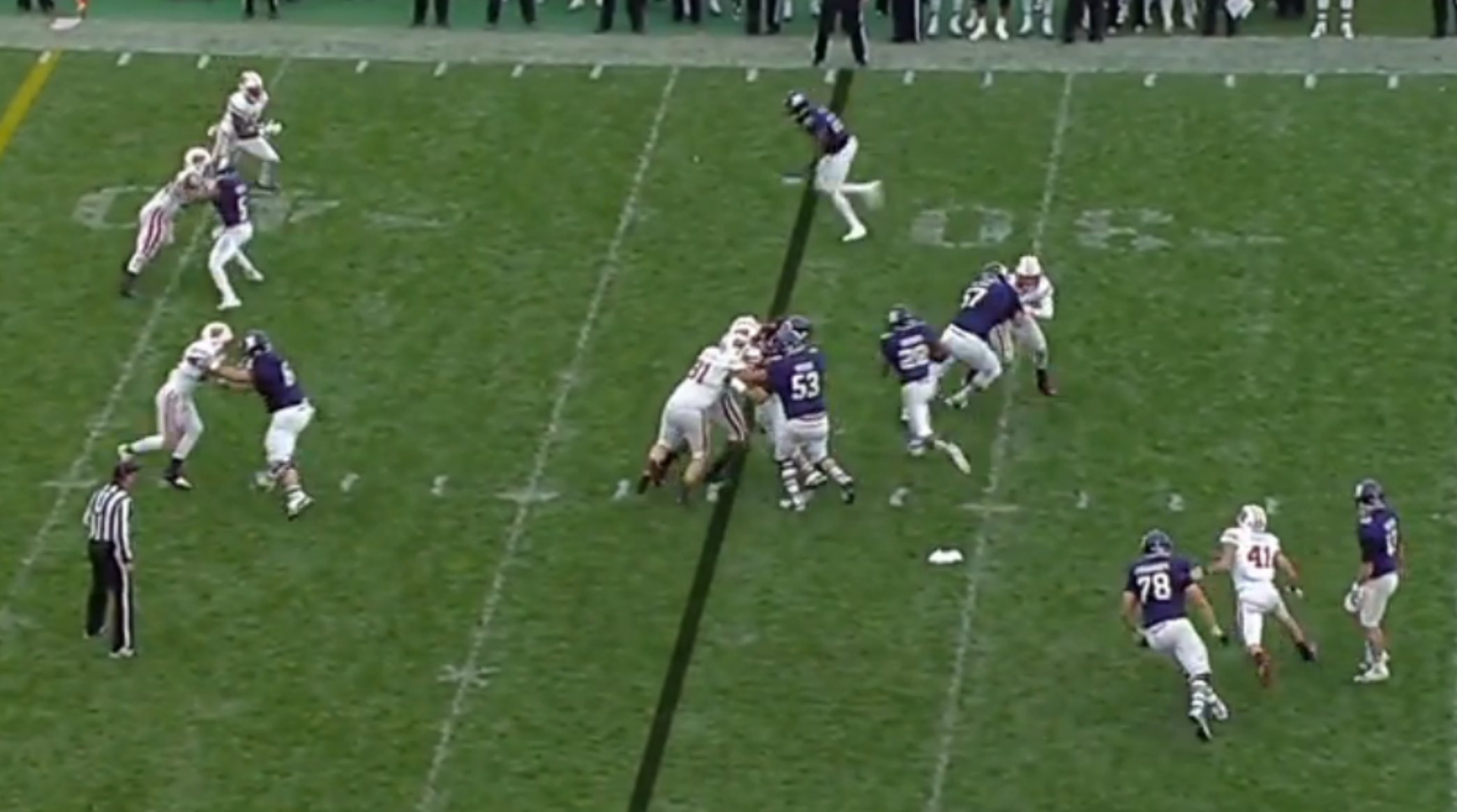 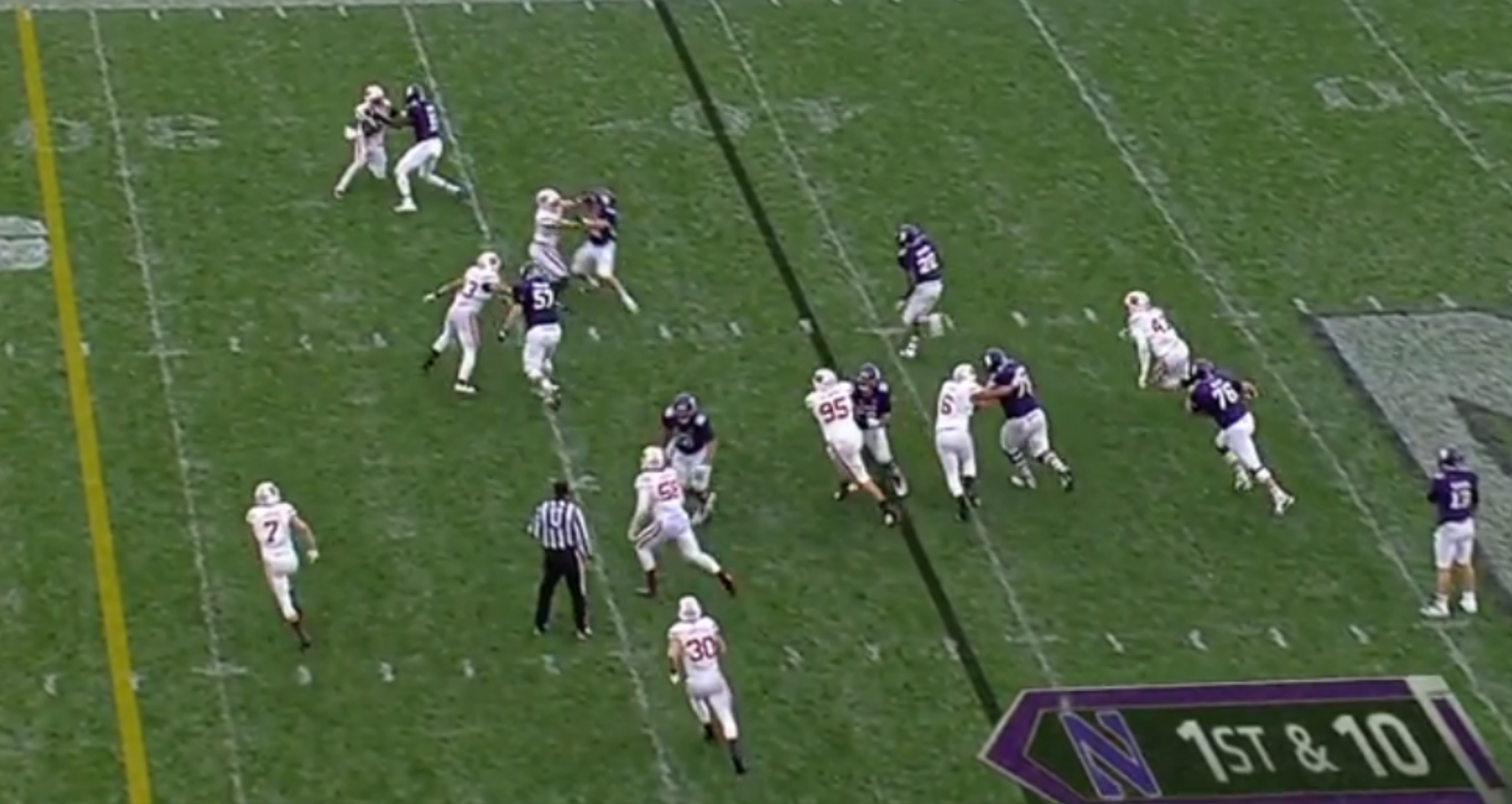 Whereas earlier in the season NU running backs had to make their first impactful move or encounter their first defender before they even reached the line of scrimmage, Justin Jackson and company were able to get their eyes downfield far more often Saturday. Our Kevin Trahan wrote about the offensive line's improvement after the victory over Penn State, but on Saturday, the unit was even better. Pat Fitzgerald named right guard Matt Frazier the team's offensive player of the week, calling him "very physical, and probably our most consistent offensive lineman right now," but he might as well have given the award to the entire position group.

Additionally, plays like the one pictured in the last frame, a sweep to the right, allowed Jackson to get in space. And in reality, just as the offensive line made Jackson look good, Jackson returned the favor. Jackson played his best game yet at the college level. His vision and cutting were tremendous. Jackson isn't a track star, but he's quick and agile, and has an uncanny ability to evade tacklers at the last minute, or at the very least avoid clean hits. As the NU football Twitter account tweeted:

Whether or not that tweet is lame (note: it is extremely lame), it's true. And furthermore, it seems that NU is gradually building its offense around Jackson's ability. Any thought of a running back by committee is a thing of the past. Jackson carried the ball 33 times Saturday compared to Treyvon Green's three carries and Warren Long's three, and through three quarters, Jackson was averaging 5.9 yards per carry. His cutting ability might be a perfect fit for NU's blocking schemes, and going forward, he and the offensive line will have big roles to play in how far this offense can carry Northwestern in the Big Ten.