CHRIS COLLINS IS A GODSAINT 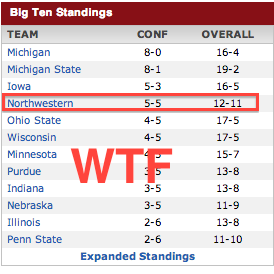 Northwestern hit five early threes to jump out to a ten-point lead, but foul trouble to Drew Crawford allowed Minnesota to tie it by the half, and the Wildcats went into the break up 32-29. Neither team could really do much offensively in the second half -- sound familiar? -- but a pair of late threes by Drew Crawford and Tre I MAKE LOVE TO PRESSURE Demps gave NU a close lead.

Up one, Tre Demps airballed a terrible shot to give Minnesota the ball with 11 seconds left, and, we all assumed we'd lose. But Minnesota missed at the rim for pretty much the first time all game, and the Wildcats got the W.

I'm seriously starting to wonder what happens if we finish the regular season with a winning record. NIT?