The Northwestern Wildcats will win the Big Ten Tournament

Northwestern can only make its first NCAA Tournament in 2014 in one way: by winning the Big Ten Tournament. Here's why I think it's not only possible, but probable that Chris Collins' bunch punches their dance ticket.

Share All sharing options for: The Northwestern Wildcats will win the Big Ten Tournament

It's that time of year -- the time where, before the postseason has even started, people talk about the Northwestern Widlcats basketball team as if they're due for another year without a trip to the NCAA Tournament.

That is most likely true. The Wildcats finished 11th in the Big Ten, 147th in Ken Pomeroy's rankings, 135th RPI, and, for some reason, were placed in zero of the brackets examined by Bracket Matrix. But here's the thing: Even the sun goes down, and heroes eventually die. Horoscopes often lie. Nothing is for sure, nothing lasts for ever, so until they close the curtain, it's (blah blah blah Go Wildcats)

Allow me to present you with two equally valid methods of figuring out who will win the Big Ten Tournament, held from Thursday to Sunday in Indianapolis. There's Kenpom's Log5, which uses dumb math and stuff. 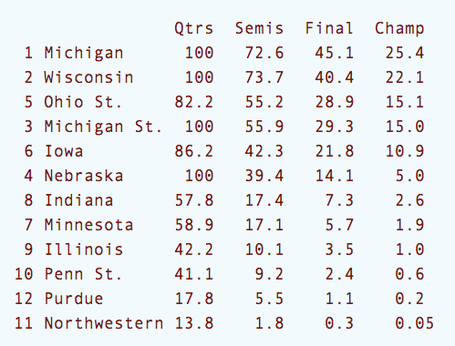 Somehow, Pomeroy finds that Northwestern has just a .05 chance of winning the tournament -- not only last, but only 1/4 as good as 12th-seeded Purdue, who Northwestern beat twice during the regular season. This is on account of Pomeroy's statistics ranking Northwestern 147th in the country, 42 spots below Purdue, in his eyes the 11th best team in the league.

We can also look at the poll at BT Powerhouse, a much more scientific method which I did not ask fans to rig even a little bit. (BTW, head over to BTP for awesome comprehensive Big Ten Tourney coverage.) 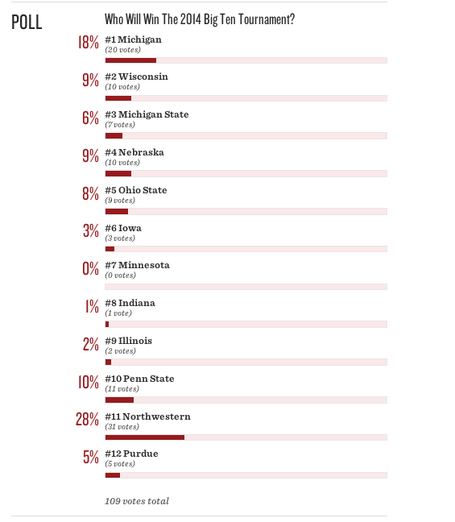 Obviously, Northwestern is the putative favorite to win the Big Ten Tournament, and it makes perfect sense. Sure, Northwestern went 6-12 in a conference stacked with talented squads, but there are a variety of things to take into account:

1.  We've never seen Chris Collins coach in a tournament situation before -- even that thing out in Las Vegas was not really a bracket, per se. Surely, after many years at Duke, he's learned a thing or two about winning single-elimination doohickeys like this.

2. Unlike the other teams, we've never been to the NCAA Tournament -- and need to win to make the championship. I've occasionally said that to make the NCAA Tournament, NU would have to go on a run in conference play -- that four wins in a row is more likely than the 10 or so in conference play to go dancing. I'm not sure I believe this with the strength of the classes Chris Collins has recruited, but its certainly true this year.

That means that NU will have the Will To Win that other teams just won't have. Look at what happened with Wisconsin-Milwaukee: 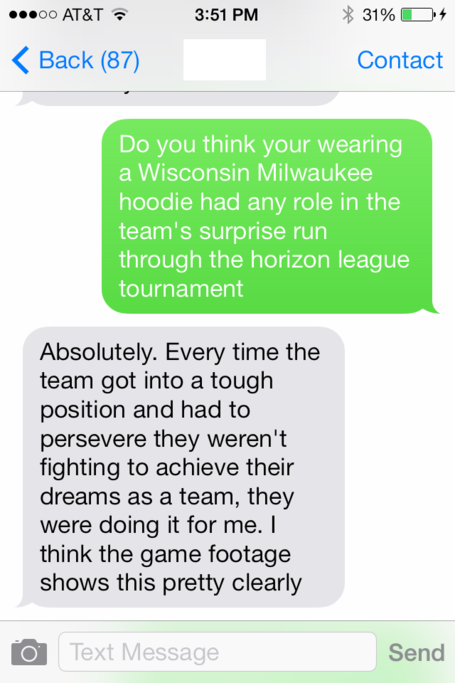 As a 7-9 Horizon League team, the Panthers needed to win every game in their tournament to go dancing. And knowing they had Bro Wearing A Wisconsin-Milwaukee Sweatshirt pulling for them, they got the W's they needed. NU will do the same.

3. Morgan Freeman would not lie:

Freeman just referred to Northwestern grads Reggie Hearn and Austin Nichols as "championship athletes," whereas they in fact, have not won any championships, unless you count the 2012 South Padre Island Invitational. Freeman has a prestigious reputation to hold, and wouldn't sully it by calling NU players stars unless he had evidence to back it up. As the omniscient, omnipotent creator of all things in this universe, its possible Freeman knows something about what will take place in Indianapolis -- or perhaps even that he has some stake in it.

I know what you're thinking: Northwestern played Iowa twice this year, and was whipped both times, losing by 26 at home and on the road. Iowa is a matchup nightmare for Northwestern, a fast-paced squad that has the size and skill to best any efforts to force them to play on the outside. They bullied NU in every aspect of both games: boards, turnovers, shooting, everything.

But while NU lost to Iowa at home and on the road, even the haters have to admit that we have no idea what would happen at a neutral site. The Wildcats won both games they played in the state of Indiana this year, so it's more like a home than their real home.

Friday, vs. No. 3 Michigan State

Like Iowa, the Spartans beat Northwestern twice, by 14 and 15 points. But while the Spartans are sitting back with their first round bye and resting on their laurels, Northwestern will be out fighting. There's a word for teams like Michigan State that rest while their opponents work: lazy. The Wildcats will have confidence and momentum at their back after knocking off Iowa, while Michigan State will be too busy congratulating themselves on getting a first-round bye. Ignore the fact that they are better than Northwestern at literally every position on the floor -- what does a team with its NCAA Tournament ticket all but punched have to play for?

Do you ever wonder if the villains in sports movies realize they're the villains before losing? They probably do -- they probably take a deep breath, look around, and understand that their failure is for the best. And that's what we expect to happen Sunday.

The Northwestern Wildcats will make the NCAA Tournament: God, internet poll voters, and most importantly, me, sports expert Rodger Sherman, all believe it to be so. Now place your bets and remember to give me a small percentage.