Unionization Could be Bad News for SEC; Good for Big Ten, Pac-12

Share All sharing options for: Unionization Could be Bad News for SEC; Good for Big Ten, Pac-12

Now that CAPA has won its initial petition for Northwestern players to unionize against the university, the question naturally becomes, what's next? Well the technical answer is appeals on appeals on appeals, but now that unionizations of college football has a real chance of becoming a reality, the conversation will naturally turn to where it strikes next.

As I'm sure you've heard, only players from private schools can join CAPA. Athletes at public schools will have to petition their state labor boards to unionize. This creates a problem for the NCAA: If some schools can unionize and others can't, then the unionized schools could bargain for things — expanded medical coverage, an education trust, etc. — that will give them a recruiting advantage. Considering how much the NCAA covets competitive balance, that might be what they fear the most.

So which schools will have the easiest time unionizing? The obvious answer is the private schools, but there are other public schools that could win the right to unionize. However, in "Right-to-Work" states, where unionization is difficult, teams could be at a disadvantage. Of course, there are exceptions, but those states (in purple in the map below) generally could pose more problems for athletes hoping to unionize. A list of the schools in the "Big Six" conferences below, by group. 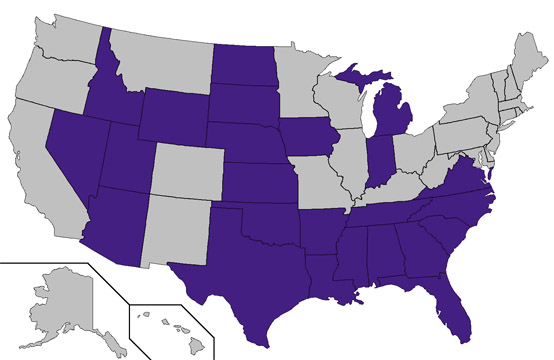 Here's how it breaks down by conference:

As I said, there are exceptions, but the Big Ten and the Pac-12 would presumably benefit the most from unionization at the private schools and and in non-Right-to-Work states. In fact, this might be the best way for the Big Ten to reverse the trend of top recruits heading to the SEC.

Ironically, you could see a lot of typically-anti-union conservatives in the South petitioning their state governments to allow unionization in order to help their favorite football teams. But don't worry, NU fans — Tea Partier Allen West of Florida says (indirectly) he's coming to the Big Ten's rescue. 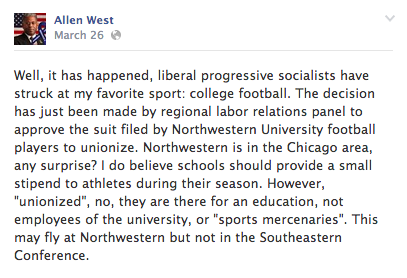