Northwestern football landing recruits so fast, nobody can keep up.

Despite a brutal year, Northwestern's 2015 recruiting class is looking great early. TURN DOWN FOR WHAT.

Share All sharing options for: Northwestern football landing recruits so fast, nobody can keep up.

Surely, Pat Fitzgerald's Wildcats have dropped off a cliff, right? After years of steadily increasing wins, the Wildcats entered 2013 as a ranked team, only to flop into a 1-7 season. And the offseason brought a divisive union battle, that pitted coaches against players and players against players.

It would not be surprising if after a terrible year, all the momentum the Wildcats had slowly built year after year on the recruiting trail quickly dried up. Nobody would want to play for these Wildcats, right? 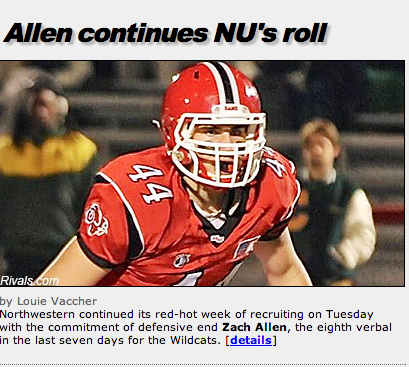 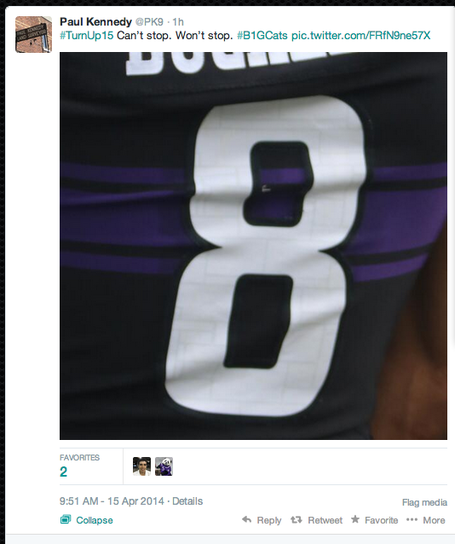 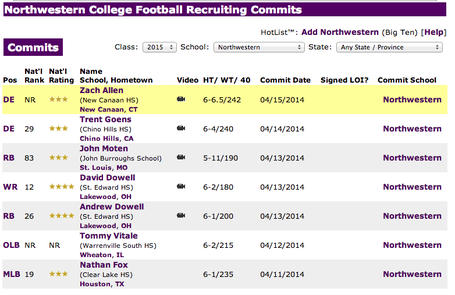 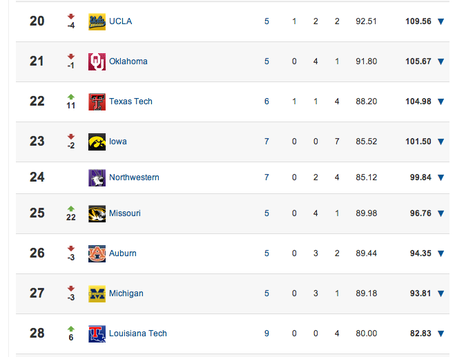 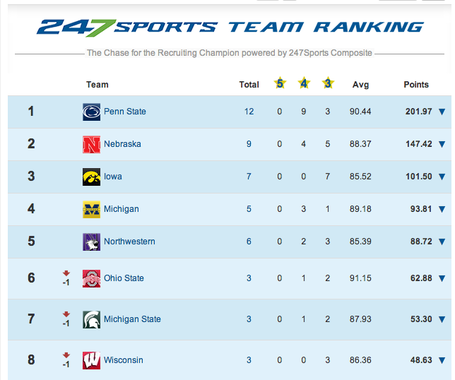 Talked to #Northwestern commit No. 8 (6) yesterday. It's his announcement to make, but it's another long day ahead.

This required parsing, so here goes. On April 11th, Northwestern had zero announced commits in the 2015 class, before linebacker Nathan Fox committed. Today, on April 15th, they have seven, and the general consensus is that an eighth will be announcing today.

And it's not just random dudes:

3-star, offers from BC, UConn

Not the craziest craziest class by terms of opposing offers, but it is rather early in the process. (#LOLlinois tracker: the Wildcats have three commits with Illinois offers, Illinois has two commits... total... neither with NU offers.) With two four-stars under the belt and only seven (eight?) guys committed, they're doing pretty well: last year NU had four four-stars amongst their 15 recruits, which was the best class in school history to date, so, they're on pace here.

The one problem: we're talking about recruiting in April, and as we found out last year, the only time it really makes sense to talk about recruiting is the few days directly before signing day. But considering how hectic everything surrounding Northwestern is right now, and how doom and gloom things have been on occasion, this is... encouraging. Very, very encouraging.

However, this ignores the most important recruiting battle NU faces. The battle to be the most Turnt Up.

You see, people in the NU athletic department have decided that the way to term Northwestern's recruiting ventures on Twitter is with the hashtag "Turn Up 15:"

Turning up it is…here we go! #ChicagosB1GTeam is on fire! #TurnUp15 #B1GCats! The race is on! #WhosNext?

(You see, if you work in an athletic department, you can't actually talk about recruits on Twitter, but you can use code words, a la Kevin Sumlin's YESSIR.

However, Texas Tech also lays claim to the concept of turning up, under the premise that "TTU" stands for "Too Turnt Up." Hence Kliff Kingsbury's t-shirt.

Sirs, we remember the 2011 TicketCity Bowl. We will not let this banner fall.

May the Wildcats continue to turn up on the recruiting trail, and may we continue to be unsure about what could cause them to turn down.