2014 spring quarterback recap: How much will Northwestern's offense change?

Share All sharing options for: 2014 spring quarterback recap: How much will Northwestern's offense change? 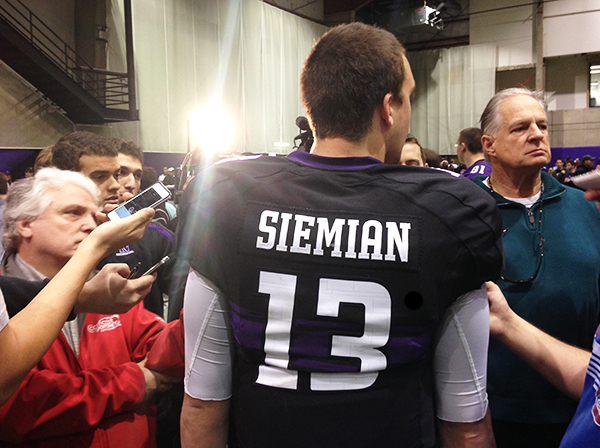 As the new starting quarterback, Trevor Siemian will become Northwestern's leader, a role that may require him to repair a split locker room. Josh Rosenblat | INSIDE NORTHWESTERN

While Siemian had been listed at "1b" for most of the last two seasons, the senior will finally have the reigns to the offense completely to himself. He is the only quarterback on the roster with any significant college experience and deservedly has the starting job. Behind Siemian, Alviti has received the most snaps this spring after the highly-touted recruit redshirted last season. Oliver who backed up both Siemian and Kain Colter last year has slid down to the third spot and Salem, a sophomore, fills in the final spot.

Alviti, in many ways, was the prize of Pat Fitzgerald's 2013 recruiting class. A four-star quarterback who ESPN rated as the number-2 dual-threat quarterback in his class, Alviti committed to Northwestern despite offers from Notre Dame, Michigan State and Nebraska. Listed at only six-feet tall, Alviti is known to use his feet to make plays as both a runner and a dangerous passer outside of the pocket.

In fall practices, it seemed that the defense was a bit too fast for the freshman and he struggled to harness is abilities into tangible success in practice. Moving into the spring, the game has slowed down for him and he is more comfortable going through his reads and making the right decisions about where to put the ball.

Is it possible for a player's stock to be both trending up and down? In Alviti's case, yes. The danger with being such a major recruit is the expectations. After Siemian's less-than-stellar performances in certain games last season, many felt that Siemian would be challenged by the younger Alviti for the starting job. From all indications so far this spring, Alviti is not ready for that role. Although it may be conceivable that he could come in as a change-of-pace quarterback at certain points to provide more of a running threat at the quarterback position, Alviti has done nothing substantial enough to take the job away from Siemian this spring.

This isn't technically a battle, per say, but there is a small chance that Siemian may rotate with Alviti like he did with Colter, but on a much smaller scale. In practice, Alviti hasn't been shy about tucking the ball and running. He has confidence in his abilities as a runner and presents an extra challenge for defenses. It's hard to see Alviti taking over the job full-time unless Siemian is injured, but he could take a few snaps away from the pocket passer because of his ability to run.

Biggest offseason question: How much will Northwestern's offense change?

Without a mobile quarterback at the helm like Dan Persa or Kain Colter, Northwestern's offense will look different than it has the past few seasons. Siemian is built from more of the C.J. Bacher, Mike Kafka mold of Northwestern quarterbacks: a strong-armed, pocket passer. What that means for Northwestern's offensive approach is that certain schemes--like zone-reads or spread-options--won't be as successful. Those plays--staples of the Northwestern offense for years--are far more successful when the quarterback is a threat to run. Because Siemian is not, Northwestern may rely on more conventional running plays. Offensive Coordinator Mick McCall will need to come up with a way to balance the running and passing attacks.

Last season, Siemian played a ton due to various injuries to Colter and finished with mixed results. It seemed as though the more Siemian was forced to throw, his effectiveness decreased.

Siemian is at his best when used more moderately than when the offense completely falls upon his shoulders. Northwestern will need to utilize a deep and talented stable of running backs to help Siemian have as much success as possible in 2014. Basically, instead of relying on the quarterback to generate the majority of the offense, Northwestern will be better served to strive for more balance.