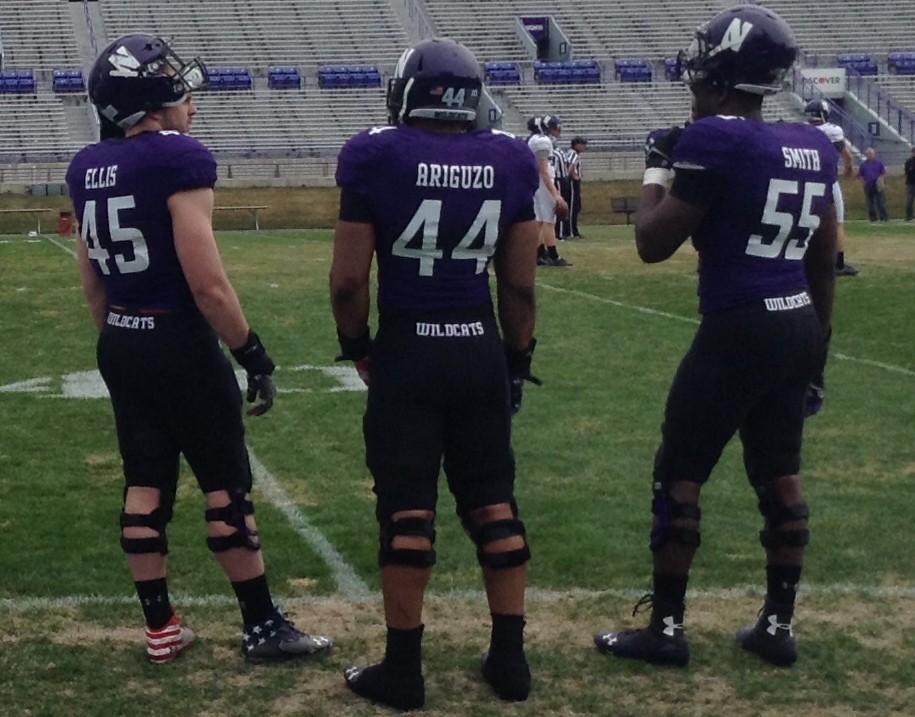 Collin Ellis, Chi Chi Ariguzo and Drew Smith enter 2014 as the favorites to start at linebacker, bringing both versatility and experience to the position. Josh Rosenblat | INSIDE NORTHWESTERN

With the departure of Damien Proby, Collin Ellis, who started all 12 games at SAM last season, will move over to MIKE, opening the door for a new starter at SAM. During training camp last season, Ellis was locked in a position battle with Drew Smith for the starting spot on the strong side and Smith has gotten the opportunity to take over for Ellis this season. Jimmy Hall, a former defensive back, moved to linebacker this spring to compete with Smith. After starting as a sophomore at SAM, Chi Chi Ariguzo moved over to WILL last season and excelled.

It's been awhile since since Ariguzo's stock wasn't up. He has been one of Northwestern's top defensive players for the last couple seasons playing alongside veteran players. If he's able to stay healthy, Ariguzo will be one of the top linebackers in the Big Ten in 2014. Over the years, Ariguzo has developed from a run-stopper on the strong side to an athletic, versatile player in space on the weak side. Last season, Ariguzo's first playing WILL, he showcased an innate ability to make plays from sideline to sideline.

Last season, Northwestern's linebackers were forced into a tough situation. Because the defensive line was unable to plug running holes up front, the linebackers had to inch closer to the line of scrimmage to contain the running game. That allowed for teams, such as Ohio State, to burn the now-out-of-position-defenders on play action passes. With Ellis shifting over to the middle and Smith taking Ellis' spot on the strong side, Northwestern may be in trouble defending against the pass yet again. Because Smith's instinctual tendency is to be as aggressive as possible, he will have to learn be patient when looking into the opponent's backfield and adjust his positioning accordingly.

After losing out at the starting job last offseason, Smith looked poised to take hold of the position this spring. But with Hall's conversion from safety to linebacker, Smith has found himself in another position battle. Smith has always been one of the hardest hitting players on Northwestern's roster but his instincts and footwork in coverage have come into question. On the other hand, Hall has the ability to cover player receivers and the quickness to make plays in open space, but his linebacker instincts are still developing. So far, Smith has at the upper hand due to his ability to stop the run, but both players could play situationally during the season with Hall spelling Smith on passing downs.

During spring practice in 2013, Ellis filled in for an injured Proby at middle linebacker. The experience, he said, gave him "a holistic view of what the defense does from the linebacking core. You can understand where your help is coming from in different situations. You can be more aggressive and go out and make that play that you previously thought you couldn’t have made.” That experience could prove to be valuable as Ellis looks to take over at middle linebacker.

After taking over the middle linebacker spot midway through the 2011 season, Proby has been a mainstay on Northwestern's defense. Besides his stellar play, Proby was also a leader for Northwestern as a 2013 co-captain. According to Pat Fitzgerald, though, Ellis has picked up where Proby left off and immediately became a leader on the defensive side of the ball when spring practice began.

On the field, though, Fitzgerald said Ellis' eyes are just starting to adjust to where they should be. The vision lines are different for outside and inside linebackers, Fitzgerald said, and knowing where to focus his vision will be key for Ellis. But based on his performance last season, especially returning two interceptions for touchdowns against Cal, Ellis has the playmaking ability and versatility to have a major impact in the middle of Northwestern's defense.