A Night at the Ballpark, Lacrosse-style

Share All sharing options for: A Night at the Ballpark, Lacrosse-style

The lacrosse field set-up at Wrigley...worked much better than the football set-up.

Northwestern’s 12-7 victory over USC at the Friendly Confines marked the first time that Wrigley hosted a lacrosse game since 1920, when the Illinois Athletic Club held their annual field day there. The day consisted of boxing, wrestling, and tug-of-war, but the main event was a men’s lacrosse match. Before Saturday night, Wrigley had never hosted a women’s lacrosse game.

The Cats’ appearance at Wrigley was a continuation of the athletic department’s quest to make NU “Chicago’s Big Ten Team.”

NU’s football team played a game against Illinois at Wrigley in 2010 (the infamous “one endzone game”).

Then, in February of 2013, NU inked a five-year deal with Wrigley to host a multitude of sports. Football will have five additional games at the Cubs’ home field, NU baseball played there last April, and now lacrosse got their chance. The softball and soccer teams could also be in the mix for future Wrigley games.

But this night belonged to the lacrosse women.

“Honestly, this was a really, really special experience for our players,” coach Kelly Amonte Hiller said. “I think it was a good opportunity for them to play on a big stage, to be able to handle that type of pressure and go up out there and really execute. We will remember this. We talked a lot about it this week in terms of savoring the moment and I just said, walking out here, I really don’t want to leave. It was a lot of fun.”

It was a quintessential evening at Wrigley, minus the baseball part. The ivy, still brown from the harsh Chicago winter, laced the outfield wall, right behind one of the goals. The flags flew above the vintage, manually-controlled scoreboard, though they were purple and white instead of blue and red. There was a “ceremonial first draw” with Chris and Courtney Combe, namesake of the Combe Tennis Center on campus. The Wrigley Field organ even made several appearances, playing the Northwestern fight song during breaks.

The evening’s importance didn’t stop with Wrigley’s women’s lacrosse debut, though: it was also critical to the Wildcats’ season. NU had lost two straight games, each by one goal, prior to the match against USC. With the ALC Tournament coming up this Thursday, NU needed to find its winning rhythm again.

“I think it’s very easy for us to (put the excitement behind us) because I don’t think our players are pleased with where we’re at in the ALC,” Amonte Hiller said. “We have something to prove so we’ve got to go out there Thursday against Vanderbilt and really play our hearts out and have another day to play. That’s what it’s all about at tournament time. It’s just living to play another day.”

So with four days until the playoffs, there’s only one thing to say: 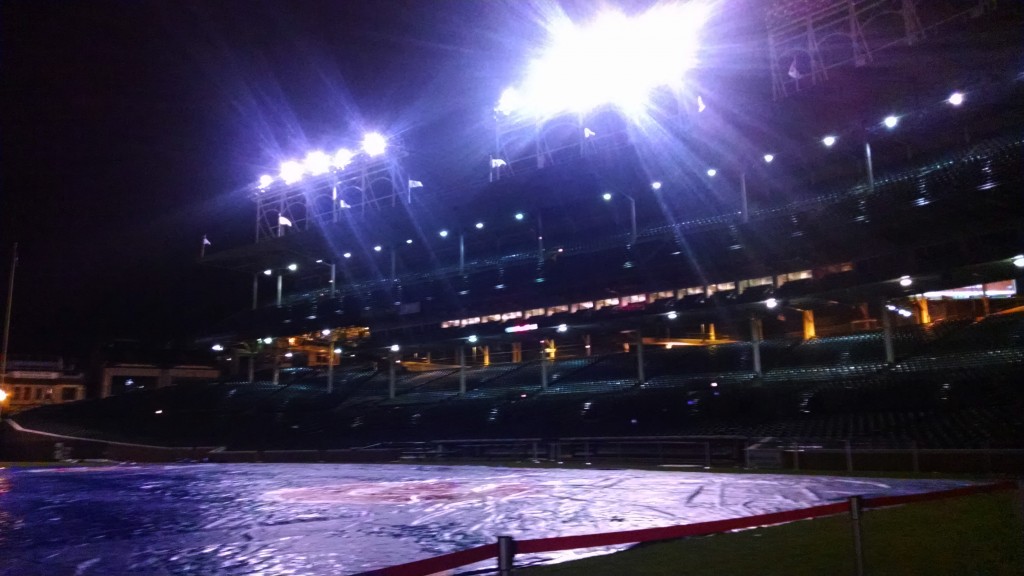 Bonus: An empty Wrigley is almost a religious experience.