Share All sharing options for: Seniors power NU past USC at Wrigley Field 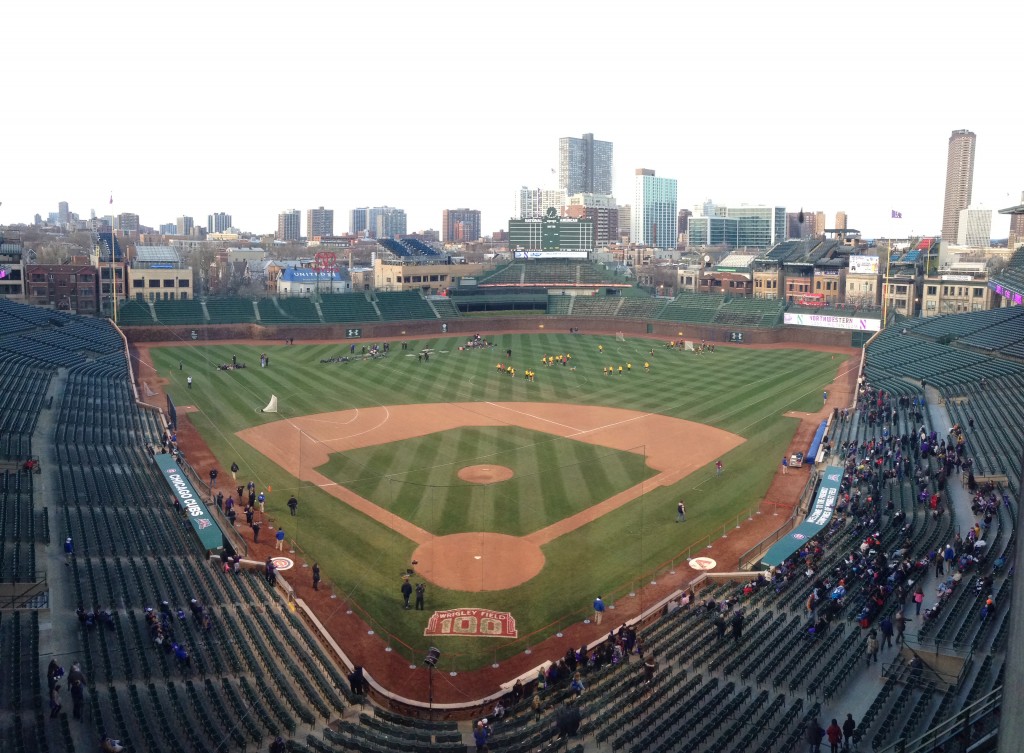 The view from the press box of the lacrosse set-up at Wrigley Field before Northwestern beat USC 12-7 (the stands filled up more once the game started). If you look really closely you can make out one white dot in shallow left field and one in deep right field. Those are the two goals.

Over 5,000 fans watched on as Northwestern lacrosse (10-5, 3-3) finished its regular season in fashion, beating USC (8-8) 12-7 in a historic game at a cold and windy Wrigley Field Saturday night.

On a shortened field stretching from the third base line to the ivy in right field, Northwestern and USC made history by playing in the first lacrosse game at the Friendly Confines in over 90 years.

"Wrigley has that old time feel and it has that history," goalie Bridget Bianco said. "Now we feel like we're a part of the history since we got to play on the field."

While NU senior day was officially last week, it might as well have been Saturday. Five different NU seniors, led by Kara Mupo’s game-high four scores, combined for all but one of the Cats’ goals. With leading scorer sophomore Kaleigh Craig out with injury and Kat DeRonda off to a slow start, Mupo (who will be back next season after taking an injury redshirt in 2013) and Alyssa Leonard stepped up to carry the load offensively in the first half.

The Trojans, who are in their second season at the varsity level, kept it close in the first half. After both teams traded goals early on, Leonard took over.

Following a goal from Kelly Rich, Leonard won the subsequent draw control and sprinted through the USC defense to score in nine seconds. Minutes later Leonard turned defense into offense by poking the ball away from a Trojan defender, scooping up the loose ball and scoring to give NU a 4-1 lead with 17:25 left in the first half.

Mupo also added a hat trick in the first half. A couple costly turnovers by NU kept the Trojans within striking distance, down 6-3 after 30 minutes of play.

The women of Troy played stingy defense all night but failed to clear the ball after stops and it was only a matter of time before Northwestern began to take advantage and turn Trojan turnovers into scores.

Leonard opened up the scoring for the Cats in the second half on a beautiful over-the-shoulder shot. Then DeRonda started to find a groove offensively, adding two goals in a span of seven minutes. By the time Mupo netted her fourth goal of the game off a free position shot, the Cats led 11-3 with 13:41 left.

The Trojans finally managed to get on the board in the second half when Caroline de Lyra scored on USC’s first shot in nearly 20 minutes to snap a 6-0 NU run. USC found some holes in the NU defense and went on to score two more goals in two minutes, but it was too little too late for the Trojans.

The Cats clamped down their defense and held on for the win, snapping a two-game skid in the process. Amonte Hiller and company now turn their focus to the last ALC tournament, which opens at Lakeside Field Thursday. NU gets Vanderbilt in the first round.

"We're looking forward to hopefully playing three more games this week," Kate Macdonald said. "We're really looking forward to getting back to Lakeside Field. It's going to be awesome to play there and play some teams we want to play again."

-       The atmosphere was great at Wrigley. The field looked somewhat oddly placed on the diamond and it took some time to get used to watching lacrosse on a baseball field, but the venue worked out well. The turnout was better than expected and Wrigley even had the organist playing during breaks, which was cool. "We will remember this," Amonte Hiller said. "We talked a lot about it this week in terms of savoring the moment and I just said, walking out here, I really don’t want to leave. It was a lot of fun.”

-       Some players did have trouble getting their footing on the grass (they’re used to artificial turf) and had to make the switch to cleats. "I changed to cleats at the timeout and I didn't slip as much after that," Kate Macdonald said.

-       The Cats beat Vanderbilt 15-9 April 10 at home and should advance to the next round of the ALC tournament barring an upset. If the Cats win they will likely face OSU, who beat NU 11-10 in overtime at Columbus March 9. If they get by OSU the Cats could get Florida, who beat them last week. It will take NU's best effort to claim its seventh ALC tourney crown in eight years.

-       Mupo will need to continue to contribute more offensively with Craig out indefinitely if this team has any chance of keeping up with offensive powerhouses such as Florida.

-       The Cats likely will need to win the ALC tournament in order to get a top four seed and home field advantage in the first two rounds of the NCAA tournament.