Matthew Snow writes statistical analysis about Northwestern basketball at bsktballbythenumbers.blogspot.com. You can follow him on Twitter at @bktbNUmbers.

It’s no secret that Northwestern’s offense was bad in the 2013-14 season. In terms of scoring efficiency, Northwestern’s 0.88 points per possession in conference play was the worst the B1G has seen in the tempo-free era*. Unsurprisingly, Northwestern’s shooting percentages were low across the board: 44.8% 2P, 27.7% 3P, and 43.4% eFG. Some have argued that guys just missed open shots, and that’s certainly true, but it doesn’t take into account who was taking the shots and where they were taking them.

Shot selection matters, and I would argue that Northwestern was overly reliant on mid-range jumpers. In conference play (including the B1G Tournament) the ‘Cats took an unusually high percentage of mid-range jump shots. 22.5% of Northwestern’s field goal attempts came between 10 feet from the goal and the three-point line, whereas the average Division I team attempted just 17% of its field goals from mid-range.

When it comes to the mid-range jump shot, I tend to agree with Houston Rockets GM (and Northwestern alum) Daryl Morey. On average, it’s a low percentage shot: in 2014 Division I teams shot 34.9% from mid-range. Considering that the average team three-point percentage was 34.5%, teams averaged 0.337 fewer points on every mid-range shot versus every three-point shot.

Four players took 91.1% of Northwestern’s mid-range attempts: JerShon Cobb, Drew Crawford, Tre Demps, and Alex Olah. Considering those four attempted 77.8% of all of Northwestern’s shots, this isn’t terribly surprising. I’d like to look more closely at Demps and Cobb, since they are both returning for the 2015 season and seem to perform a similar function in Northwestern’s offense. As the shooting percentages indicate, Demps was not a particularly good mid-range shooter while Cobb was outstanding. 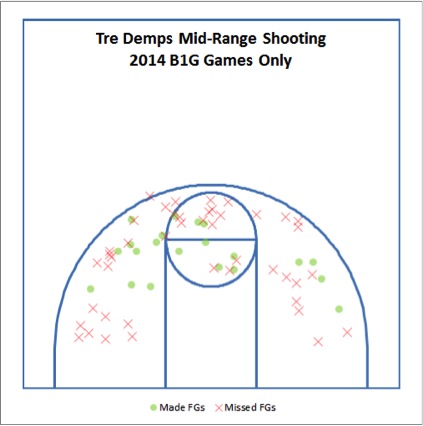 I’ve often heard Demps described as one of the few Northwestern players who can create his own shot. Considering only 28.57% of his made mid-range field goals were assisted, it certainly seems that he was adept at creating his own shot. Nevertheless, I believe that the ability to create your own shot is perhaps the most overrated skill in basketball. I don’t particularly care how a player or team gets its shots; I care about whether they make those shots or not.

Simply being able to create your own shot doesn’t matter much if you don’t make that shot, and Demps did not make a lot of the shots he created for himself. 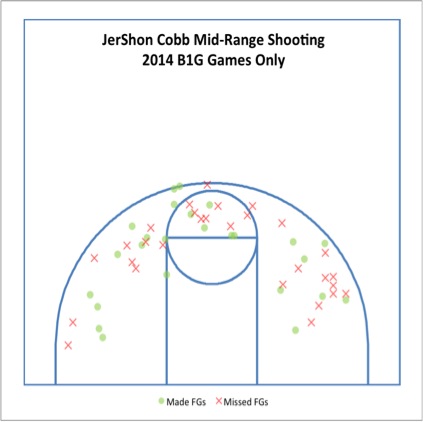 Cobb, on the other hand, was a great mid-range shooter, but he was more reliant on his teammates to get those shots. 40% of his made mid-range shots were assisted, suggesting that Cobb was good at creating his own shot AND that the team was good at finding him from mid-range.

Earlier I intimated that I don’t like the mid-range shot and that creating your own shot is overrated; Cobb is the sort of player who forces me to make exceptions. He’s proven to be very comfortable from mid-range in his Northwestern career and has a deceptively smooth ability to find shots. A guy like Cobb is valuable not just for his shot-making ability but also for the way that ability can open up the rest of the floor, especially the lane near the basket, to give his teammates good looks.

I expect Demps and Cobb to be two of Northwestern’s top-three scoring options in 2014-15 (Olah being the third; I’m taking a wait-and-see approach to the five freshman). How can Northwestern utilize each player for more efficient scoring? I’d like to look at where each player shot, how well they shot from each distance, what proportion of the team’s shots they took from each distance, and how they got those shots.

Over 85% of Cobb’s field goal attempts came from mid-range and three-point distance, while Demps took just over 71% of his shots from those two ranges. So, Demps got into the lane and to the rim more frequently than Cobb did. Neither player got to the line very often. The team FTRate in conference play was 30.8%, led by Olah at 44.1%. Both players should seek to draw more fouls since shooting free throws is generally a highly efficient way to score.

Cobb was an all-around better shooter than Demps, besting his teammate everywhere but at the rim. Cobb was especially effective inside ten feet (close range shots), but he only had six attempts from that range so that high percentage isn’t particularly trustworthy. Regardless, Cobb should definitely be the primary shooting option of the two players.

Demps attempted 220 shots to Cobb’s 149 in conference games, but that figure is somewhat deceptive since Demps played six more games than did Cobb. On a per game basis, Demps averaged 11 field goal attempts while Cobb averaged 10.6. Even so, their respective shooting percentages suggest that Cobb should be getting more of the team’s attempts, especially from mid-range and three-point distance. For what it’s worth, Olah only took 14.46% of Northwestern’s shots in B1G play; if Demps gets more attempts than Olah next season, something is seriously wrong with the offense.

This is where I find the starkest contrast. Demps is working harder for his made shots while Cobb’s seem to come more from a team offensive flow. I would love to see Demps create fewer shots for himself while allowing his teammates to find him for decent looks. In fact, I would love to see that for the whole team. Until Northwestern has a roster full of guys who can create on their own in the B1G, it would be better served to take a more team-oriented approach to offense.

Considering each player’s scoring efficiency per field goal attempt, it seems obvious that Northwestern should build its 2014-15 offense around Cobb and Olah. Demps should be a tertiary option at best. Demps needs to take fewer mid-range shots, while Cobb actually could stand to take more. Both players would be well served to attack the rim and draw more contact, while also working on finishing better at the rim. With Crawford gone, Cobb will need to play a bigger role next year than he has in his Northwestern career to date. If he stays healthy, I think he’s capable of doing so.

*I used shot data from only B1G regular season and tournament games in this analysis; the numbers here do not include non-conference games.

*Correction: this article previously stated that "the ‘Cats would only have gained 0.115 points per shot had they traded all mid-range shots for threes." That was erroneous. It has been corrected.

Take a look at some extra shot charts, too: 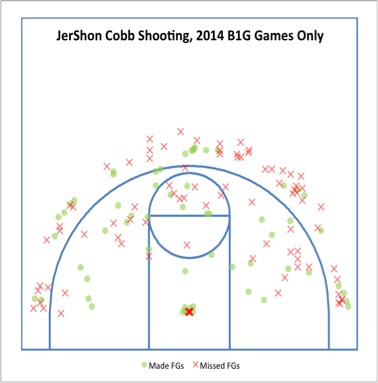 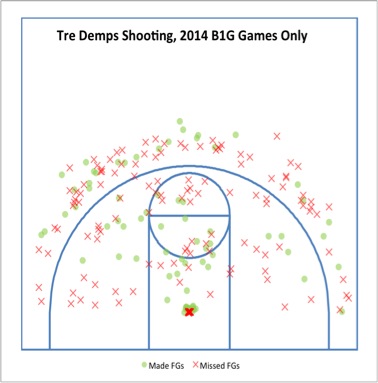 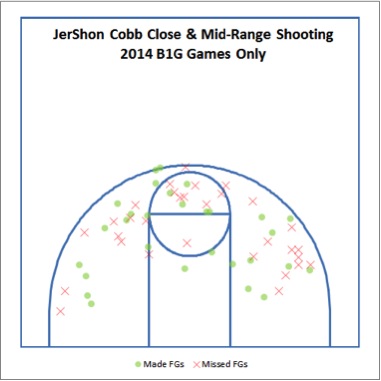 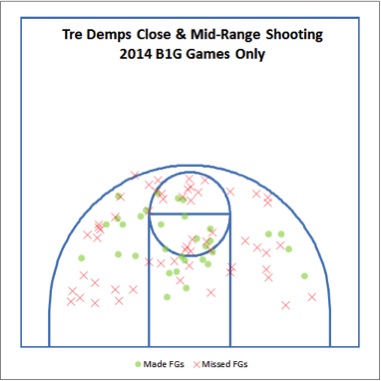