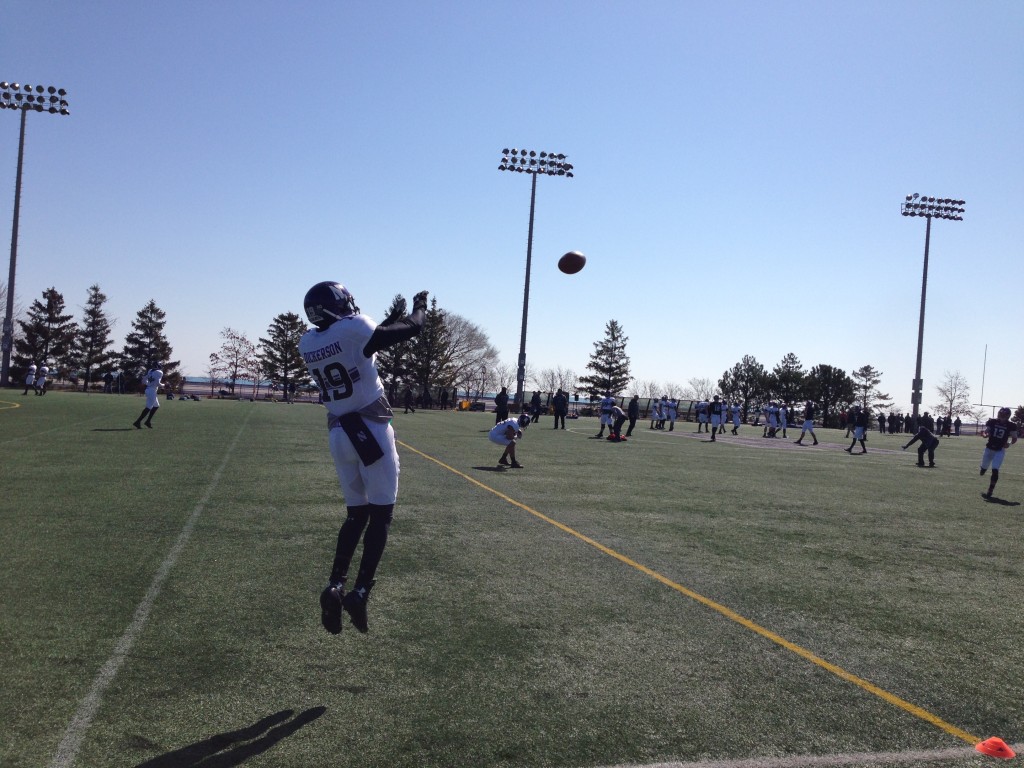 Junior WR Cameron Dickerson hauls in a pass in a spring practice drill at Lakeside Field.

- Senior QB Trevor Siemian started off hot in 11-on-11 action. He went 3-for-3 in his first series, which included a 15-yard grab by Christian Jones. Siemian struggled a bit in his second series. He was unable to complete a pass in four attempts, although two of the incompletions came on drops.

- LB Drew Smith got called out by Fitz for slowing up near the end of a play in 7-on-7 drills. Jimmy Hall subbed in for Smith and took reps with the first team for the majority of the remaining practice. Hall and Smith will be battling for the third linebacker position alongside starters Chi Chi Ariguzo and Collin Ellis.

- In its first 7-on-7 series, the second team offense, with QB Zach Oliver under center, jumped off-sides on its first two plays. Fitz voiced his frustration by screaming at his O-line.

- Senior WR Kyle Prater made the catch of the day: a left-handed snag on a deep pass from Oliver in 7-on-7 action.

- Sophomore Matthew Harris had the only turnover from scrimmage. Harris jumped a Jones out rout and intercepted Siemian for “six.”

- Sophomore RB Warren Long and junior WR Miles Shuler had a couple drops apiece. Shuler dropped a wide-open pass from sophomore QB Matt Alviti in the endzone. Alviti looked calm and confident delivering the ball from the pocket. He started 3-for-3 passing in 11-on-11.

- RB Teyvon Green took one of his few scrimmage carries 30 yards. Green bounced off numerous defenders and used a couple stiff arms to power his way through the defense.

- Redshirt freshman safety Kyle Queiro, playing in place of the injured Ibraheim Campbell, made a big hit on a pass to Shuler. Queiro took first team reps and played well.

- After practice Fitz said his team “is behind” schedule, which he attributed to injuries that have prevented some key players from getting 11-on-11 reps. He also answered questions about the union situation, which InsideNU’s Henry Bushnell wrote about in more detail.

- Junior Nick VanHoose noted that the defense played “slow” today and that the offense came out with more intensity. VanHoose has also taken freshman corner Parrker Westphal under his wing and says Westphal is settling in nicely.

- Senior center Brandon Vitabile was one of the few Northwestern players that admitted that the union stuff may be distracting some of his teammates. Mark and VanHoose made it sound like most of the players on the team have not yet decided how they will vote April 25th.

- The competition for backup quarterback should be interesting this spring. Oliver started with the second team offense, but Alviti also got in some reps with the backups and looked good. Fitz will have to decide if he wants to give the spot to his dual threat protégé or the more experienced Oliver.

- It will be a while before fans get a good look at the 'Cats’ starting defensive line. Defensive tackles Sean McEvilly and Max Chapman and defensive ends Deonte Gibson and Ifeadi Odenigbo are all sitting out spring practice with injuries.