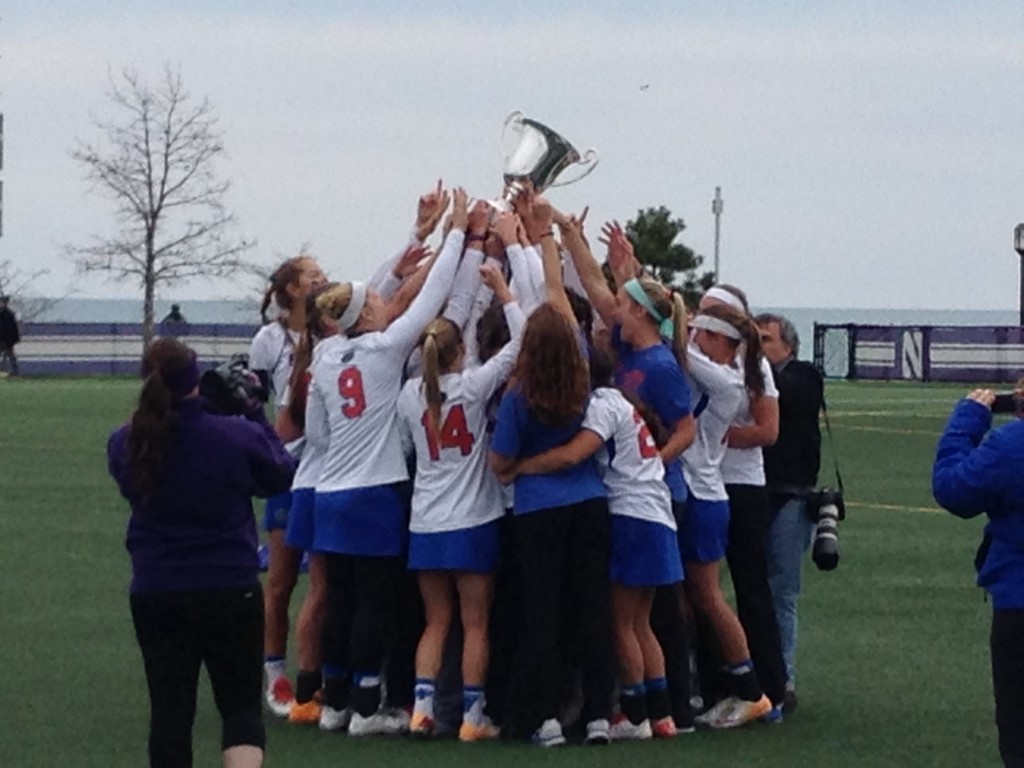 The Florida Gators celebrate their second ALC title in three years after defeating Northwestern 9-8 in dramatic fashion. Florida used a late scoring surge to rally past the Cats at Lakeside Field Sunday.

For 30 minutes the Northwestern lacrosse team played with fire and grit, fueled by a heartbreaking loss to Florida just two weeks prior. For 30 minutes it appeared the Cats would claim the final ALC championship on their home field and enter the NCAA tournament playing their best lacrosse of the season.

For 30 minutes Northwestern was the better team. But 30 minutes wasn’t enough to avoid another heartbreaker.

No. 3 Florida (17-2, 6-0) completed the largest comeback in program history to stun No. 5 Northwestern (12-6, 3-3), 9-8 in the last-ever ALC championship game at Lakeside Field Sunday afternoon. Junior Nora Barry knifed through four NU defenders and fired the game-winning shot between the legs of junior keeper Bridget Bianco with 32 seconds left.

The Cats led 7-2 at halftime and 8-4 with 23 minutes remaining in the second half, but the Gators poured in five unanswered goals to take their first lead of the game on Barry’s last-minute strike.

“We did everything wrong in the second half,” NU head coach Kelly Amonte Hiller said. “We came out with the same level of intensity and focus in the first half like we did when we were trailing in the first game. We have to keep it together for 60 minutes not just 30.”

The first game Amonte Hiller referred to was NU’s April 19 meeting with Florida: Riding a furious second-half comeback the Cats overcame a six-goal deficit to nearly force overtime in the final minute. The Gators managed to hang on and win 13-12.

This time around the script was flipped. The Gators were playing from behind. Nevertheless, the result was the same: a thrilling victory for the visitors and a heart-wrenching loss for the home team.

Florida’s comeback started in the draw circle. NU dominated draws in the first half (7-3) and thus controlled possession and shots on goal for the first 30 minutes. But Florida garnered the edge in the second half (5-4) and enjoyed more scoring chances as a result.

ALC Rookie of the Year Sammi Burgess and sophomore Lauren Lea both bounced their 8-meter chances by Bianco to give Florida some much-needed momentum just three minutes into the second half. Then two minutes later Kara Mupo scored NU’s final goal of the game to put the Cats up 8-4.

From that moment on Northwestern appeared to play tentatively on offensive, perhaps trying more to preserve its lead rather than add on to it. Florida took advantage, extending its pressure with double teams and forcing turnovers.

“We were still able to move the ball and we could have gone to goal but I don’t know what we were doing,” Amonte Hiller said about her team’s second half play. “We should have been able to take advantage of opportunities.”

The Cats had limited the nation’s leading scorer, junior Shannon Gilroy to just one goal until she split two Northwestern defenders to score her 80th goal of the season with 22:48 left to bring the Gators within three. Gilroy was later named MVP of the ALC tournament.

Lea then connected on her second 8-meter goal of the game to cut NU’s lead to two at the 14-minute mark. Leonard won the subsequent draw control but turned it over and was given a yellow card for a dangerous swing.

Playing a man-up, Florida capitalized. Gilroy found 6’2” Devon Schneider on the doorstep to make the score 8-7.

Bianco came up with a potential momentum stopping save minutes later but another NU penalty gave freshman Mollie Stevens an 8-meter try. Stevens converted to erase what was a five-goal deficit and tie the championship at 8-8.

To Northwestern’s credit, the NU defense fought off about 10 more minutes of Florida’s high-powered offense. But the Cats struggled to get any scoring chances of their own until the final minute.

The Cats appeared to be holding the ball for the last shot of regulation until Mupo found a cutting Kat DeRonda who couldn’t find the back of the net from point blank range. Florida regained possession and finished off the comeback.

“Finishing a game out would be helpful,” Amonte Hiller said.

It really was a tale of two halves for Northwestern who couldn’t have started any better. Leonard won the opening draw of the game and then found a wide-open Christy Turner in front of the cage for the game’s first goal. Florida responded minutes later, using its speed off a turnover to catch NU scrambling on defense.

Both teams then traded 8-meter scores until Mupo and Leonard grasped control and Northwestern scored five unanswered to close out the half.

Mupo used her quickness to cut past a defender and then spin back 180 degrees to flip a shot over the goalie’s shoulder to put the Cats up 3-2. From behind the goal, Leonard then found a cutting Kelly Rich for another easy one.

Leonard then found some space in the Florida defense and scooped a bullet through the legs of keeper Mary-Sean Wilcox. Mupo gave NU a 6-2 advantage with five minutes left in the first half on a wrap-around goal. And Leonard finished off the half on a point blank look from freshman Lydia Cassada.

After 30 minutes the Cats were in control. Their offense was clicking and their defense was limiting the highest scoring offense in the nation (at over 15 goals a game). But things unraveled quickly in the second half.

The loss likely assures Northwestern will not receive one of the four all-important one seeds in the NCAA tournament, which kicks off May 9. This also means that NU will not have home field advantage in the tournament and will likely have to beat a team like North Carolina or Florida on the road to reach the Final Four.

The NCAA bracket will be released Sunday night at 8 p.m.

“We need to look into ourselves and determine what we want for this team,” Turner said.

-       Florida now has a 6-3 all-time record against the Cats and a 3-1 record at Lakeside Field. The Gators ran the table in the ALC, which has five top 10 teams (in the coaches poll) and is arguably the best conference in the nation.

-       This loss was clearly devastating for the Cats. At the post-game press-conference the usually stoic Amonte Hiller was holding back tears. She really wanted this one.

-       Mupo led all scorers with three goals. Florida seems to bring out the best in her. She has a combined seven goals against the Gators in two meetings this season.

-       Kat DeRonda was quiet, too quiet. If the Cats are going to make any sort of run in the NCAAs she will need to make some serious noise with Kaleigh Craig still out with injury.

-       Amonte Hiller admitted that it will be a lot tougher to make it to the Final Four now that her team will have to beat a top four seed on the road to get there. The Cats have been to nine straight Final Fours.

-       This was the final ALC tournament. The conference will be disbanded after this season and Florida and Northwestern will sadly leave for separate conferences. This rivalry has produced some amazing games including Sunday’s. Hopefully the rivalry manages to continue after this season. I can tell you one thing for certain: Northwestern would love to have another shot at Florida in the NCAA tournament.