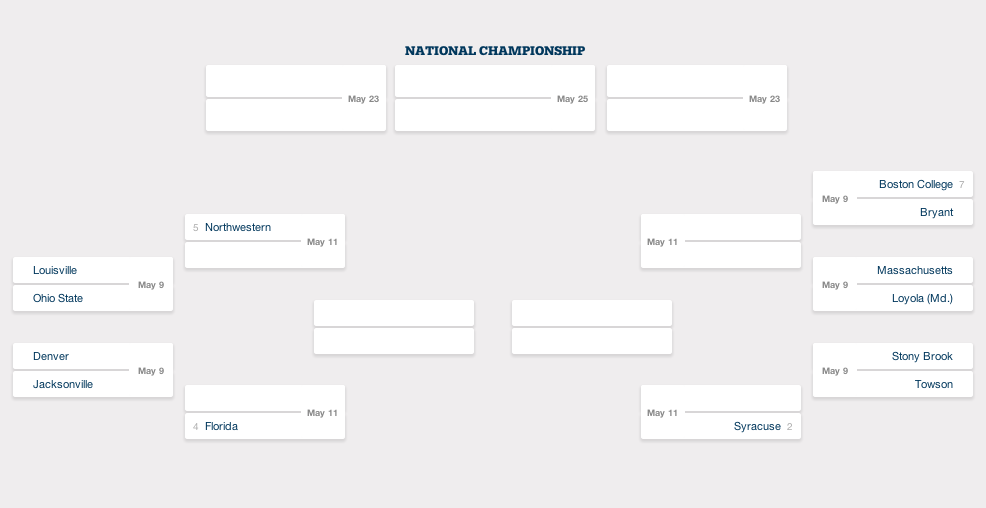 Here is the bottom half of the bracket. The rest can be found here: http://www.ncaa.com/interactive-bracket/lacrosse-women/d1/2013

The NCAA Division 1 Women’s Lacrosse Committee has released the 2014 championship bracket and Northwestern has some familiar opponents in its region.

The Cats are seeded fifth out of 26 teams and have a bye in the first round as expected. NU will host the winner of the first round matchup between Louisville and Ohio State. Should the Cats advance to the third round they will travel to Gainesville for a likely rematch with No. 4 seed Florida, who plays the winner of Denver and Jacksonville.

OSU and Louisville will face off Friday May 9 at Lakeside Field. The Cats will play the winner Sunday May 11.

OSU/LOU: Louisville (15-3) is riding an 11-game winning streak and is fresh off a Big East Tournament championship victory over Georgetown Saturday. Ohio State (13-6, 4-2) is coming off a strong season that included an overtime victory over Northwestern back in March. (The Cats avenged that loss Friday night in the semifinals of the ALC tournament, 9-8.) OSU beat Louisville 12-11 in the teams’ only meeting this season in Columbus.

I say OSU will take care of Louisville. The Buckeyes have played an extremely tough schedule in the ALC and are the better team. Plus OSU just played at Lakeside last week and is accustomed to the venue. I think they win by at least three goals to set up another bout with Northwestern.

OSU/NU: The Cats own an 11-3 edge in the all-time series but the Buckeyes have really given NU trouble this season. If this game’s played in Columbus I think it’s a coin flip, but the combination of home field advantage and the added motivation of playing Florida in the next round is the difference. Cats move to 20-0 in NCAA tourney play at Lakeside and win 11-9.

NU/Florida: Third time’s the charm? Florida and Northwestern have played two thrilling, one-goal games this season. While NU could have easily won both contests, they were played at Lakeside. Traveling to Gainesville will make it a lot tougher for the Cats. Coach Kelly Amonte Hiller even admitted it after Sunday’s loss to the Gators (see recap below). NU will enter with retribution in mind and will jump out to a quick lead like it did on Sunday. But Florida’s offense is the best in the nation and Shannon Gilroy and company are nearly impossible to contain for all 60 minutes. Northwestern’s streak of nine straight Final Fours ends in Gainesville. 13-10 Gators.