The answer requires digging deeper than wins and losses.

Before the 2013 season, the national narrative surrounding Northwestern football was that it was trending upward. There were columns about the rise of top academic schools like NU, and even I jumped in on the craze following the Wildcats' win in the Gator Bowl. "Gator Bowl win proves "sky is the limit" for Northwestern football," I wrote.

Of course, we all know what happened next. NU lost five games and killed some of the momentum surrounding the program. Still, the narrative continued, even if not as strong as before: this is an underrated program that doesn't get the respect it deserves. There's still the feeling that things are going to get better, thanks to a combination of coach Pat Fitzgerald's rhetoric, improved recruiting and a new facilities plan.

There's still hope that 2013 was an aberration in an otherwise upward trend. But on Wednesday, an InsideNU commenter put that to the test, claiming that while 2013 might have been an aberration, the program is not on any kind of upward trajectory. And when you base it on wins over Fitzgerald's tenure, that certainly looks true. 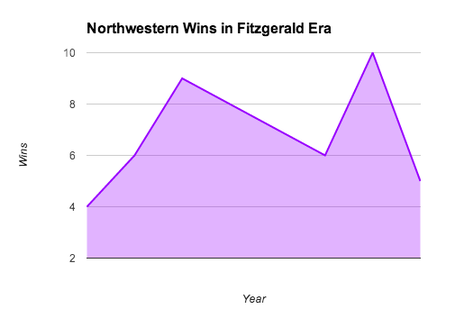 Basing the decision off past wins, Northwestern doesn't really have any right to claim it's heading in the right direction under Pat Fitzgerald. But football is a complicated game that's about a lot more than wins and losses, even if purists will tell you differently. And if we're projecting what direction the program will go in the coming years, it's important to take a lot more into account.

Have NU's recent results been based more on luck than quality?

You know the cliche: Northwestern football is incredibly unlucky. There's the bowl drought, the last second losses of the past few years and the tendency to play in close games, of which fans tend to place the presence of luck more on the losses.

But in the early part of Fitzgerald's tenure, NU was incredibly lucky, as SB Nation's Bill Connelly explains: From 2007-10, the Wildcats went a ridiculous 20-8 in games decided by one possession. That's not supposed to happen. ... Was Northwestern lucky as hell?

The idea is that close games have proven to be random over a sample size of tens of thousands of games. Typically, teams win half of their close games, while NU won 71 percent of its close games in that stretch. That helped propel Fitzgerald to a 34-29 record in his first five years, when it really should have been closer to 28-35. This over-performance — taking NU to back-to-back 9-win and 8-win seasons, including an Outback Bowl berth — led Fitzgerald's stock to skyrocket, and it gave the Wildcats an "on the rise" label that stuck even as they regressed toward the mean.

The regression caused disappointing seasons in 2011 and 2013, while the 2012 season produced a spike in luck, though that was based on an incredible lack of injuries, not finishes in close games. However, the regression in wins wasn't necessarily indicative of NU's regression as a program.

A look at NU's F/+ ratings, which show how good teams should be without luck (not counting injuries), shows that NU has improved as a program since 2010 — right when the new recruiting push really started.

As the chart shows, even through all the injuries, Northwestern still had about as good of a team in 5-win 2013 as it had in 8-win 2008, and it had a comparable team in 6-win 2011 as well. Even with all the close losses, if the Wildcats hadn't had monumentally terrible luck with injuries in 2013, their F/+ ratings could have continued on a pretty good trajectory.

So when you take luck out of the equation, NU has shown solid improvement since 2010 (a year that also looked a lot worse because of injuries), even if the record doesn't show it. That's encouraging, because it's right when the Wildcats' recruiting uptick began.

For reference, a class with an average rating above 85 — when normalized for the number of recruits — will generally land in the top 30. A class between 83 and 84 will generally be in the 30-50 range and one between 83 and 82 will generally be in the 40-60 range. When you take all that into account, it's clear NU is getting better players. And while there will be fluke seasons along the way and luck will always play a part in success, the fact that the Wildcats keep getting better players means they should generally continue to get better in the future.

Of course, there are other factors at play. For instance, NU might outplay its recruiting ratings because its coaches — particularly on offense — have generally done a good job of using schemes that will maximize the available personnel. However, there are also roadblocks that could inhibit growth.

There is no evidence to support the fact that the Wildcats have, as Fitzgerald often claims, the best player development staff in the country, considering how few players the program puts in the NFL relative to their recruiting ratings (it's not the only factor there, but still a good indicator). Fitzgerald also must improve his in-game decision making. Fitzgerald's early luck may have ended up being a burden in that it caused some fans to gain an inflated perception of the program.

But overall, when you mask the luck and all the other noise that can get in the way of the objective analysis, it appears that NU is getting better. The record didn't show that last year, but given the outlook of the best predictive measures, the Wildcats should be able to turn it around.