Share All sharing options for: Who is new Northwestern big man Jeremiah Kreisberg?

Following the transfers of Chier Ajou and Kale Abrahamson and the graduation of Drew Crawford, James Montgomery III and Nikola Cerina, it had been rumored that Northwestern was in the market for a veteran big man transfer; a one-year player who could step in right away to provide valuable minutes alongside and in relief of center Alex Olah.

Names had been thrown out there, but all was mum until the Chicago Tribune's Teddy Greenstein did his best imitation of NBA reporter extraordinaire Adrian Wojnarowski.

Source to Trib: #Northwestern gets commitment from 5th yr transfer Jeremiah Kreisberg, from Yale. He is 6-10, 240. Will back up Olah.

But while Woj's sourced reports often send shockwaves through the NBA, reaction about Kreisberg's commitment was met more with puzzlement.

Here's a bit more about the fifth-year big man, following a hypothetical question and answer format used in a recent Grantland piece.

Who is he? Uh, Jeremiah Kreisberg.

What was the initial reaction when the news broke? "Really? That kid can't contribute much in the Big Ten." - former ESPN and Sports Illustrated college basketball writer Andy Glockner (@AndyGlockner) wrote in a tweet minutes after Greenstein's report.

Is that true? After sitting out the 2013-2014 season following back surgery, Kreisberg joins Northwestern as an unknown. His basic stats prove rather pedestrian, even by Ivy League standards, with career averages of 6.9 points and 4.2 rebounds per game. As Greenstein indicated, Kreisberg's role will be to backup Olah, who played 29.5 minutes per game last season.

What's his game like? Most of Kreisberg's offensive production comes out of the post. He isn't a game-changing defender by any stretch of the imagination, but he should be serviceable in a team-oriented scheme. During the 2011-2012 season, Kreisberg scored a very good .875 points per possession on post ups, according to Synergy. The following season, Kreisberg got more post touches and still scored a respectable .811 points per possession. Offensively, Kreisberg has a good amount of skill in the post, showing a nice array of post moves.

Any examples of what that may look like? Absolutely. After sifting through Synergy's database of videos, I came across two moves that Kreisberg especially likes to employ. The first is the hook shot. Kreisberg shows nice footwork and a soft touch in the paint.

Then, my personal favorite, is the up and under. This is a great counter-move, underutilized by big men. Kreisberg has made defenders look silly with it and it could be a valuable move that Kreisberg could teach Olah.

Has he done anything notable, basketball-wise, in his career? Kreisberg, who is Jewish, played for Israel's U20 national team at the 2011 European Championships. He averaged 12.3 points and 5.7 rebounds per game.

When I met him at the elite camp, when we were seniors in high school ... he claimed he didn't like any music instead he said, "Sometimes I'll listen to some techno when I go to a party." Mid-Major Chillin

What about non-basketball wise? Apparently, Kreisberg was a stand-out volleyball player in high school, garnering him all-league recognition. According to his MaxPreps profile, the middle blocker and opposite hitter was well above the national average for statistics such as spikes, kills, kill percentage and blocks.

What about off of the court? According to his LinkedIn profile, Kreisberg created, along with two other Yale students, SÖL Hydration, a sports drink using high-quality, natural ingredients. He also worked at Barclays Investment Bank as an analyst. He graduated Yale with a degree in Environmental Studies and interned at Sungevity, a residential solar company and volunteered for the World Affairs Council, according to his Yale bio.

So I guess he fits in at Northwestern then as a student then. Has Chris Collins said anything about him? In a statement regarding Kreisberg's commitment, Collins said, "We're excited to have Jeremiah join our basketball program. He brings four years of collegiate experience and his size and skill level will be a huge boost to our frontline."

It was pretty standard stuff from Collins, but it didn't reveal too much about Kreisberg specifically.

What does he think about Northwestern? Kreisberg reportedly told the Chicago Sun-Times' Seth Gruen the following: "I really liked the coaching staff, the opportunity to have a really great year next year is there, the players are great and obviously the university speaks for itself. The program is definitely in the right direction and the coaching staff, their experiences are unbelievable."

He also had this to say about his future teammate Alex Olah and the staff's ability to help players improve: "They talked a lot about that and how he was, maybe, the most improved player in the country last year in the last month and really look forward to the player development," Kreisberg said. "That's a huge component of why I ended up choosing Northwestern."

What's his social media presence? After an extensive search, I wasn't able to track down a Twitter, Facebook or Instagram page for Kreisberg. All I found was his LinkedIn profile. 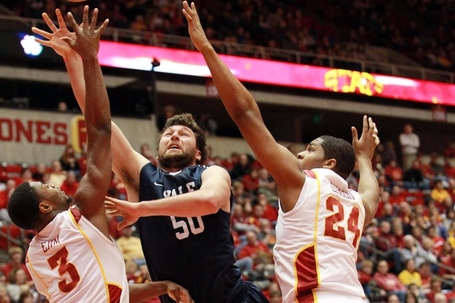 He seems kind of bland. I know that's the common response, but according to the blog "Mid-Major Chillin," Kreisberg is far more than what he seems. The blog post about him is really, really funny. I do not know how much of it is true, just adding to the mystery surrounding "The Hebrew Hammer." Some of the highlights:

Woah, I'm kind of warming up to this guy. What did the blog post mean by "He's a hairy, all-naturale, sasquatch of a man"? If you do a Google image search of "Jeremiah Kreisberg," it's clear the young man has been through a transition in terms of his personal appearance. Although Kreisberg has always been a gangly figure of sorts, his personal grooming arch is worth noting.

During his high school years at Head-Royce School in Oakland, Calif. Kreisberg sported a flowing, luscious mane of dark hair. It was the kind of hair that was thick enough to star in a Head and Shoulders commercial alongside Troy Polamalu, but feathery enough to bounce up and down with the rhythm of his steps.

As he moved into college, the teenager matured, growing a dark beard. This was the look that earned him the title of a "sasquatch of a man." But toward the end of his days at Yale, Kreisberg decided to up his "unparalleled suaveness" and cut both his hair and beard, making him an almost unrecognizable figure. Basically, he looks like how a Yale graduate should look. Unfortunately for the Wildcats, it looks like Kreisberg has maintained this latest 'do, more clean-cut and more refined look upon arriving in Evanston.

Even though his hair growth seems to have come to halt, the program hopes he continues to grow as a player and can contribute during the 2014-2015 season.