The Northwestern lacrosse team won’t have to wait long for a shot at revenge. The brand new Big 10 lacrosse conference released a preliminary schedule for the 2015 season Tuesday, and Northwestern will face defending champion Maryland in the Big 10 opener at Lakeside Field in late March.

The Terps topped NU in the Final Four in May. The last time NU and MD played in the regular reason was in 2007 when the Cats won 12-7.

Rutgers, Penn State, Ohio State and Michigan fill out the rest of the Big 10 lacrosse conference. There are five weeks in the Big 10 season. All teams play each other once. The specific matchup dates and times are pending due to television selections.

Northwestern travels to Ann Arbor Week 2 to take on a second-year Michigan team the following week. Then the Cats head to New Jersey to face Rutgers for the first time in six years. The Cats own an all-time record of 7-0 against the Scarlet Knights.

NU then hosts Penn State and Ohio State in weeks 4 and 5 to close out the regular season. The Cats will return to Rutgers University for the Big 10 Lacrosse Tournament in May. 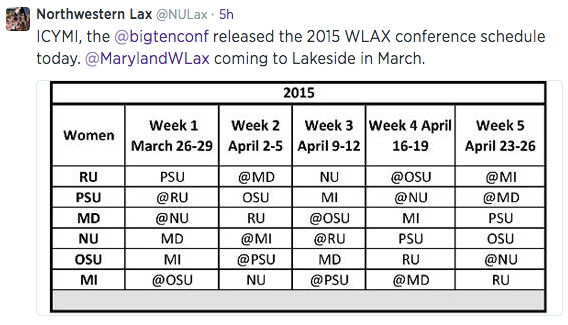 At first glance it appears Northwestern has the friendliest conference schedule of all six teams. The Cats have the easiest road schedule—they play Michigan and Rutgers. Those teams had a combined 13-22 record last season. NU has never lost to either of those teams.

The Cats will have their hands full with Maryland, who returns most of its starters including national player of the year Taylor Cummings. Maryland will likely be ranked No. 1 in the nation to start the year. The Cats will thus have a chance to again defeat the No. 1 team/defending champions while avenging a NCAA semi-final loss in their home opener. Last year NU beat the 2012-2013 champions, No. 1 North Carolina, to open regular season play at Lakeside Field.

Moreover, NU gets the luxury of hosting former ALC opponents PSU and OSU. The Cats went a combined 2-1 against those teams last season. Each game was decided by one goal. The home-field advantage will be especially important against the Buckeyes, who played the Cats tough twice last year coming away with an overtime victory in Columbus. NU edged Ohio State in the ALC tournament at Lakeside Field.