Northwestern is not, to most, a historically important football program; the only record you are likely to see mentioned on TV is the losing streak that started in 1979, spanned the entire 1980 and 1981 seasons, and only ended with a 31-6 win over Northern Illinois in the fourth game of the 1982 season (a season that saw Dennis Green win Big Ten Coach of the Year with a 3-8 team). In 2000, however, the Wildcats won what Smart Football author Chris Brown calls the most important game in the history of the spread offense, a wild 54-51 shootout with Michigan.

2000 was Randy Walker's second year at Northwestern, and heading into the year it looked like Northwestern was back to their old self: Gary Barnett had departed for Colorado after disappointing 1997 and 1998 seasons, and Walker went 3-8 in his first season, with the only conference win coming over 1-10 Iowa and their rookie head coach, Kirk Ferentz. In the offseason, Walker and his offensive coordinator Kevin Wilson decided to reevaluate their run-heavy offense, which had only managed 3.1 yards per carry and 12.8 points per game in 1999. Among the teams they visited was Clemson, where Rich Rodriguez was running an innovative shotgun spread offense, incorporating a new concept: the zone read, which introduced an option element to his running game.

This visit would change their fortunes; as Brown puts it

what Rodriguez showed them was less a new way to attack the problem of good defenses but more just a new way to think about attacking the problem. Rodriguez showed them the shotgun and the zone read stuff they were doing at Clemson and had done at Tulane, but the reason it clicked for Wilson and Walker is that they realized that they could run all their old stuff -- the zones, the power, counter, option, etc -- all from spread sets.

The new approach was on display early against Michigan, as Northwestern came out in a 4 wide formation, with trips to the left and running back Damien Anderson lined up to the left of quarterback Zak Kustok. Michigan's defense lines up with two linebackers shifted towards the trips side, while the defensive tackles both line up as 3-technique players (on the outside shoulder of the offensive guard), leaving the center with no defensive lineman in reach. 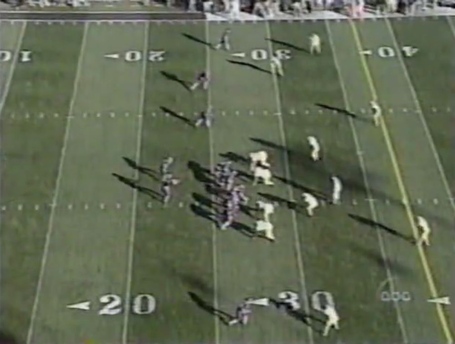 Northwestern runs inside zone right; with the center uncovered, the other offensive linemen each block a defensive lineman while the center releases straight for the playside linebacker. 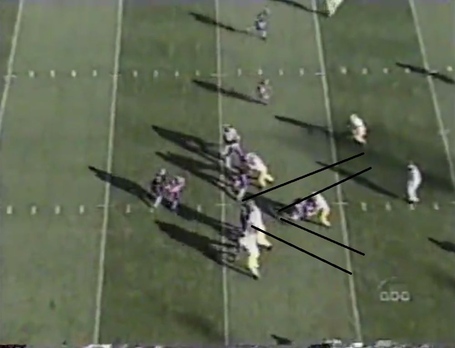 The center makes solid contact with the linebacker; with the rest of the line occupying the defensive linemen, Anderson has his choice of two sizeable running lanes. 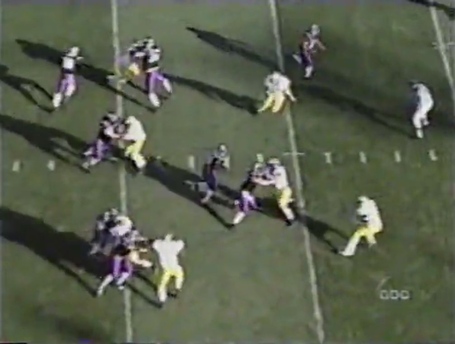 Anderson cuts left, where the linebacker has been frozen first by the inside receiver releasing and then by Kustok's run fake. 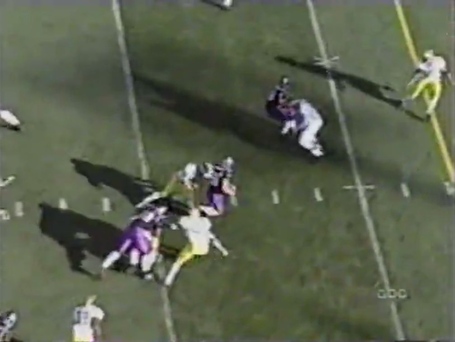 A lunging attempt to tackle fails, and Anderson gets near midfield before being brought down.

Northwestern takes advantage of another new element of the offense, hurrying to the line in the same formation. Michigan also repeats their alignment. 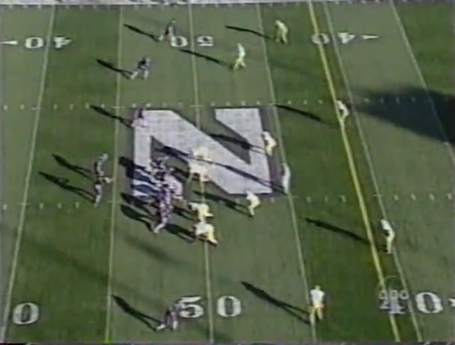 Northwestern runs the same play; this time, the center's block isn't clean, and the only lane is to the right, where the safety comes downhill to make a stop. 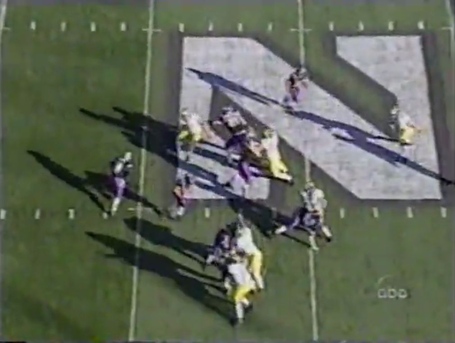 But the defender misjudges his angle, allowing Anderson to get outside for another big gain. 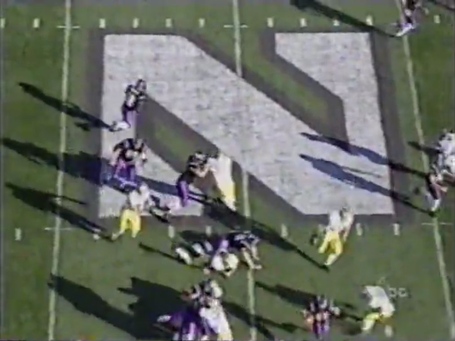 With the help of a receiver blocking downfield, Anderson finishes his run inside the 10.

There is nothing particularly tricky about these runs; nevertheless, they take Michigan off guard. The defense's alignment simultaneously leaves the center with an easy release and puts the playside linebacker in an easily blocked position; this might make sense against a pass-heavy spread team like contemporary Purdue, but it leaves Northwestern with a favorable look to run right at the defense. Compounding the alignment problem, Michigan defenders miss tackles in space on both plays. With the defense stretched sideline-to-sideline, this leaves Anderson with plenty of room to work.

This sequence shows the power of spread formations and the no huddle to identify and exploit defensive weaknesses with basic plays; next time, we'll look at how Northwestern attacked sounder alignments.