Northwestern picked up a pair of touchdowns with a simple piece of misdirection.

There is another, quite simple, option: have the running back reverse field after receiving the ball. While this requires a complete change of direction, which makes the play slow to develop, it can catch the defense overplaying the back's position and initial motion. In the 2000 Michigan game, Northwestern picked up a pair of touchdowns off of plays like this.

The first came in the red zone. Northwestern lined up with a tight end to the left and Damien Anderson to the right of Zak Kustok; with an extra blocker on that side and the running back away, the formation strongly encourages Michigan to expect a run to the left. Michigan lines up in a 4-2, with the safeties on the goal line looking inside to provide support. In a change from the double three-technique line that NU exploited earlier in the game, Michigan a defensive tackle in the A-gap on the weak side; no offensive lineman has as clear a release as the center on those plays. 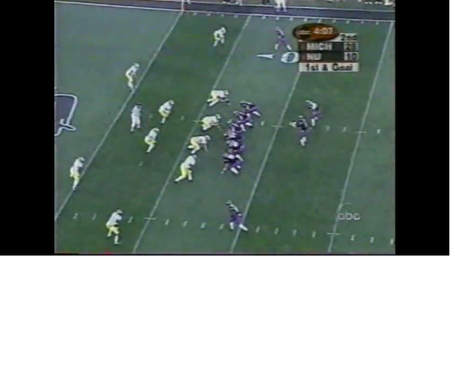 At the snap, Anderson heads left, and the linebackers immediately react, both moving to the left a-gap. The safety and end on that side set up to contain any outside movement. 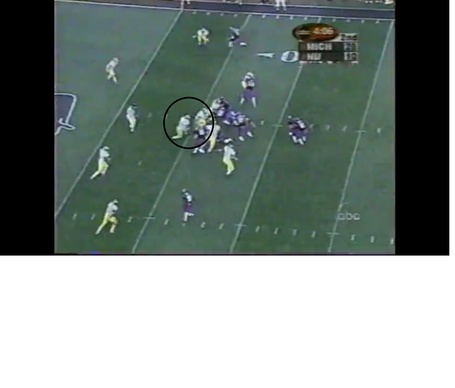 While the defense is setting up to snuff out a run to the left, however, the left tackle is pulling to the right; he blocks one of the linebackers. Anderson reverses field after receiving the handoff, heading to the right. On that side, the defensive end is being moved outside by Northwestern's right tackle, opening up a running lane inside, but the safety is in position to fill the gap and stop Anderson short of the goal line. 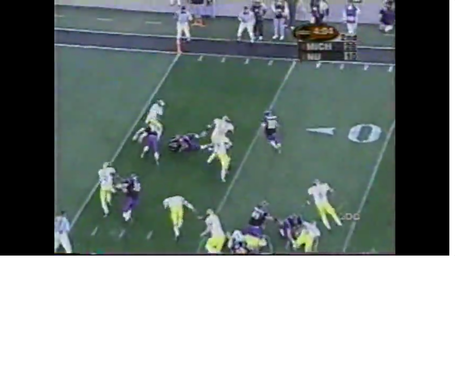 As the play develops, however, the tackle is able to get outside of the defensive end, sealing the edge for Anderson to go outside. The safety, already coming up inside, is unable to recover as Anderson heads for the pylon. Only the cornerback, having eventually shed his block, has any chance to make the tackle. 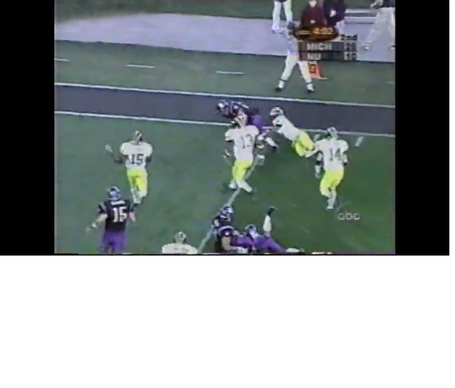 Michigan had two major problems on the play: first, both linebackers quickly commit to defending an inside run to the left; this leaves them undermanned on the right. Second, the safety is caught inside when Anderson takes the run outside. The safety is somewhat unlucky, as had the defensive end held contain the safety would have had a shot at the tackle; with pursuit limited, however, he would have needed to make it one-on-one to prevent the score.

Later in the game, Northwestern lines up in a similar formation near midfield; the only difference is that Anderson is offset to the left. Michigan is in the same 4-2, with the safeties playing significantly further back than in the goal line situation. 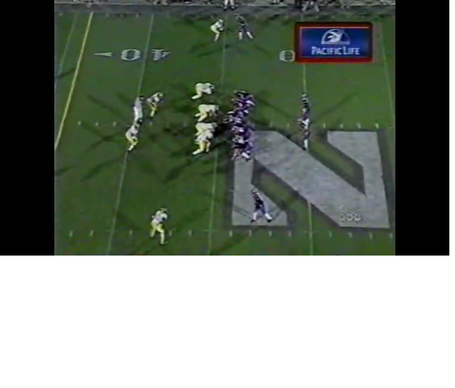 Northwestern runs power to the left, with the tight end kicking out the defensive end, the right guard pulling left to lead block for Anderson, and the rest of the line sealing off the right side of the defense. 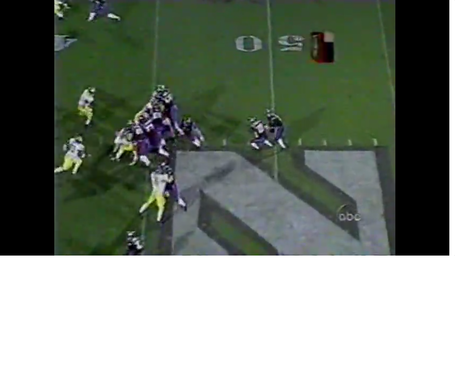 The initial blocks work perfectly, opening a massive gap between the defensive end and the rest of the defensive line, with only one linebacker in position to fill it. The pulling guard takes care of him, opening a seam for Anderson. 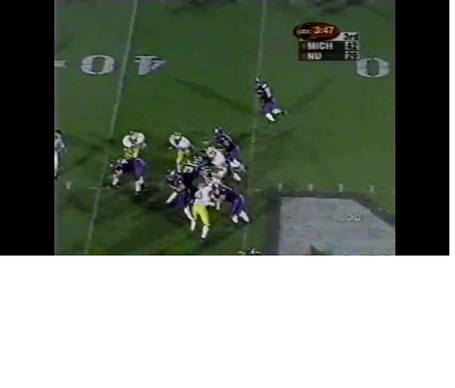 The final block comes from the slot receiver, who takes care of the nearest safety, allowing Anderson to accelerate into the open field for the touchdown. 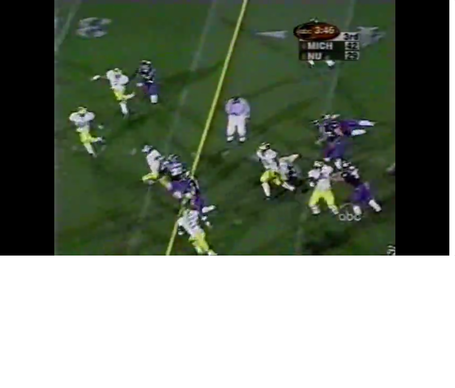 Michigan's primary problem on this play is being outmanned at the point of attack, with only 6 defenders in the box to deal with 6 blockers and the threat of the quarterback running. While the playside linebacker makes an initial step to his left, away from the play's final direction, he immediately recovers to take on the lead block; however, with the other linebacker ensuring that Kustok doesn't take off around the other end, there is no one in front of the safety who can get to Anderson. Once that safety is blocked, the running back has a clear path to the end zone.

While few spread teams today pull their tackles, running power to the running back's side is still a key part the offense at places like Oregon. In their case, they frequently put the running back both behind and to the side of the quarterback, which allows him to receive the ball going downhill on power and moving laterally on other run plays. For a few years under Chip Kelly, they even went out of their way to cultivate strong tendencies based on the back's positioning, encouraging the defense to react in specific ways.

When the modern run-first spread first came on to the scene, it caught defense's off-guard. This bought it some early success, but the reason it became one of the most common offenses in college football was the ability to adapt and change as defenses figured out how to stop it. Northwestern was a key team for showing how this could happen; as Chris Brown puts it,

Again, Rodriguez had been a spread-to-pass guy originally, who just had this one really big idea for the run game. Walker and Wilson brought to it the traditionalist tinkerer mindset, as guys who had been coaching power, run-first football for years and were experts at blocking schemes, defensive fronts, and the like.

The long-term success of spread running is a product of this tinkering, as offenses adjust to new defensive tactics by importing concepts from other styles of offense to spread formations. Randy Walker is rarely placed in the first rank of spread innovators, but his influence lingers if you know where to look.