Should the Wildcats tweak their combinations — or even their new uniforms — at all?

I've been thinking about uniforms a fair amount recently, as I often do. I like what Under Armour did in 2012. They wanted Northwestern to reclaim Northwestern striping and, as a result, they brought back the unique chest stripe.

Then they ran into a problem. White contrasts well with both purple and black, but purple and black do not go well together. Jerseys are required to have numbers on both the chest and back that are clearly readable. Instead of dealing with two colors that work well together, specifically purple and white, they were forced to use purple, white, and black to address the jersey, stripes, and numbers. There was also likely some input from the players that wanted black to be featured, but Under Armour did not have much of a choice. 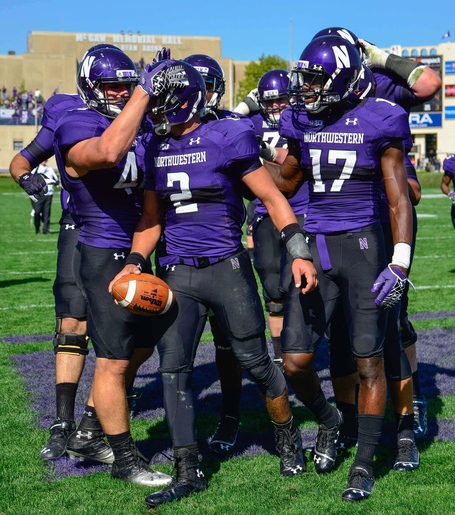 The primary purple with black striping and white numbers, fulfills the requirement of readability but fails by having black striping that is hard to make out. If the jersey is purple and the numbers have to be white, the only option is to go with black striping. It looks good up close, but not in the stands or on the average TV shot.

The other issue is the base layer. Featuring the striping on the bicep was also a good idea, but more and more players, particularly in the skill positions, have opted out of wearing them. Without the base layer, the jersey looks to be solid purple with white numbers and a white "NORTHWESTERN" printed on the chest, resulting in a rather generic look. 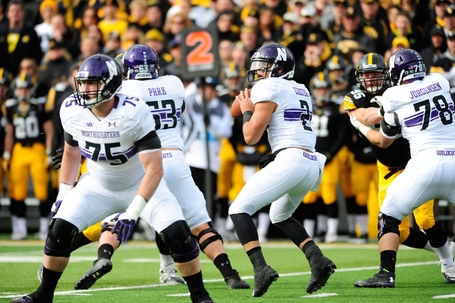 The white road uniform, in my opinion, looks amazing. Purple on white is one of the sharpest, cleanest looks. It even looks good without the base layer. 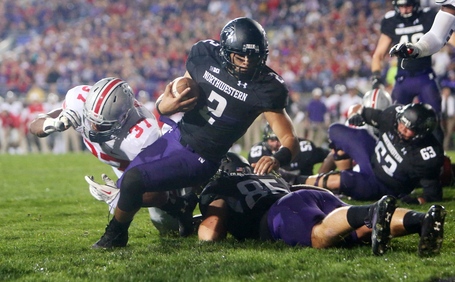 The black alternate, especially in bright sunshine, is also pretty decent. It seems that the purple striping is more distinguishable on black than black is on purple, though not by much.

Northwestern is working with one uniform that does not look the way it should and one or two that do. My first thought was to try and make the striping on the purple jersey white and give enough of a buffer around the white numbers to have it work. With wide, double digit numbers, though, this wasn't possible. And that's where I've been stumped for the last two years.

Then I had a thought yesterday: Why does Northwestern have to use the same design at home as they do on the road?

It seems to me that we tend to approach American football uniform design with the wrong mindset. If you look at other sports, it is common for teams to have radically different uniforms on the road than they do at home. Baseball uniforms seem to rarely use the same design. In soccer, the traditional primary kits can be quite different than the alternates. We saw this with the United States national team at the World Cup. Their primary uniform had a red, white, and blue design while their alternates were white and featured a collar.

There aren't many football teams that take this approach, but one notable example is the New York Giants. They currently wear a solid blue jersey with white numbers at home and a white jersey with red Northwestern striping and letters on the road. Many teams are also plagued by having a great look with one jersey but failing to have the same effect with the other. Michigan is a great example. I think their home uniform looks amazing, but their road uniform is boring and rather forgettable.

Why not break from the tradition of having the same or similar designs on both home and road uniforms? If one looks good, keep it. If the other doesn't work quite as well, change it up. So with all of that said, here is the direction in which I'd like to see Northwestern go in 2015:

With this kind of approach, either this design or something similar, NU would continue to own Northwestern striping, they'd get a clean and timeless look for home games, and they could more frequently change up the road and alternate uniforms to keep things fresh, modern, and get people to notice. They can and probably will continue to do different things with the helmet, but for the sake of simplicity, I've left that alone for now. I would love to see a white facemask, though.

One problem with Northwestern striping is that Under Armour needs to improve their execution a bit. Auburn's jersey looks okay, but they're not as good as Nike's printing. They are certainly better than Adidas, though, as those jerseys' striping tends to stretch and point in different directions. So much so, in fact, that it often appears to be diagonal or even vertical shoulder striping.

The point of writing this was not to proclaim this to be the best uniform combination. Rather, I was hoping to get some discussion going. Please leave your comments about what you like and dislike about the current uniforms and what you'd like to see. I'd especially love to hear your thoughts on having different designs for home and road. Can Northwestern have the best of both worlds? They have not had a signature look for decades, but I think it's possible they can establish one at home while doing something different on the road.

We will not be seeing any changes to the core rotation of purple, white, and black in 2014, though new jersey and pants combinations are certainly a possibility. We may also get another alternate jersey this year. I have not heard any rumors, but it's also far too early to rule that out. What I'm most interested in for this year is whether we'll see a new primary helmet design for the first time since 1981. The black and white helmets of the last two years featured a modern "athletic N" logo whereas the purple helmet kept the same stockier design.

There was speculation that Northwestern has continued to use the old design simply because they still had a bunch of the old decals left over. At some point, I think we'll see the equipment staff make the change. Could it be this year? We'll see.

Whenever I talk NU football uniforms, I feel that it's necessary to direct everyone to the HailToPurple.com uniform history section. It is thorough and well worth your time. And if you're interested in Northwestern's role in the modern football helmet, he put up a great piece about that over the winter.

I would also like to thank Tim O'Brien, from whom I stole the NU uniform template. The road and black alternate uniforms were created by him and I used his home purple as the basis for my edits. Please check out his blog, NUni Tracker, in which he records the uniform combination the ‘Cats wear for each game.