Why the Northwestern secondary's struggles have been exaggerated

Northwestern's pass defense has a reputation for being below average. But a closer look at the last five seasons indicates otherwise.

Share All sharing options for: Why the Northwestern secondary's struggles have been exaggerated

To die-hard Northwestern football fans, any hype surrounding NU's secondary in 2014 may seem as laughable as the team's pass defense in recent years. The Cats have earned a reputation as a team that struggles to defend the pass. But just how accurate is this reputation?

The Cats have ranked near the bottom of the Big Ten each of the last five seasons in "pass defense." But that statistic does not tell the whole story. "Pass defense efficiency" is a more significant marker, but it is rather abstruse and outdated. 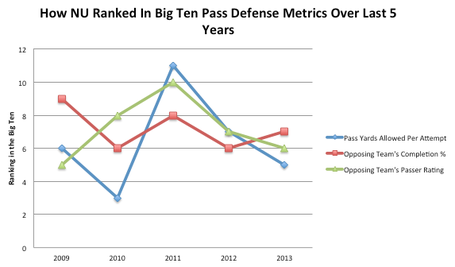 It looks like NU's bad reputation for pass defense may be a little exaggerated. Maybe fans focused too much on 2011. That might also explain why some fans could think NU's pass defense has suddenly improved to new heights over the last three seasons.

Sure they improved from 2011 to 2012, but this improvement should not be considered surprising. They just experienced an uncharacteristically inefficient season in 2011. This pass defense has been just plain average for a while now.

(I should mention the Cats led the Big Ten in interceptions last season for the first time since 2005. Sign of improvement, right? Maybe. But INTs are not the best evaluators of pass defense. They are pretty random and are sometimes created by the pass rush or a bad throw.)

So if you are a rising senior at Northwestern, it's possible you and your classmates overreacted somewhat to the secondary struggles in 2011, which would have been your first year following the Cats on campus. Beware that the relative statistical improvements in 2012 and 2013 do not mean the trend will necessarily continue and the secondary will be even better this year.

However, as Josh Rosenblat wrote yesterday, there's reason to be excited for next season, given how much talent and depth there is in the defensive backfield. While recruiting rankings are often criticized, teams with better recruits are more likely to be successful, and NU's recruiting in the secondary keeps getting better.

As star safety Ibraheim Campbell said, "You definitely kind of recognize that the level of athlete that we have playing in our defensive backfield is better than I've seen since I've been here and it's fun to watch."

NU's pass defense has been mired in mediocrity for years now, but this could finally be the year the secondary sheds its "below average" reputation and lives up to the hype.