The rebirth of Collin Ellis

Just a matter of weeks before his breakout junior season, Collin Ellis almost quit football and then it all changed.

Share All sharing options for: The rebirth of Collin Ellis

Every night I went to sleep mad at the world because I wanted to change how I was perceived and what I was doing here. I was tired of being mediocre and just an average linebacker.

CHICAGO -- Collin Ellis was stuck in what he calls "limbo land."

It was the summer of 2013, months before Ellis would burst onto the scene with two interception returns for touchdowns against Cal, months after he a struggled to make routine tackles as a back-up linebacker during his sophomore season.

After a spring where Ellis competed for the starting job at strong side linebacker, he traveled back home to Baton Rouge, La. with just a few weeks before he had to return to Evanston for summer workouts. During the offseason, Ellis was moved to middle linebacker to fill in for an injured Damien Proby and was "kinda pissed off." He played well and made some plays, but the staff made it clear that Drew Smith, who played on the strong side during the spring, was in the lead for the spot. Frustrated, the soon-to-be redshirt junior sat down with an old friend, one that had played college football for six months but then lost interest because "he just didn't have a passion for it."

"I was considering not coming back," Ellis says, recounting the conversation.

"Well, I'm at the point in my career where I can either just continue to be a third-down linebacker and not really do anything crazy and then graduate and be done after four years," he told his friend. "Or, I can really buckle down, have two really good seasons and then can see if I could even play later."

"What are you doing?" the friend responded. "Like, how is that even an option in your mind?"

That, Ellis said, was the turning point for him, the moment when he broke out of "limbo land," re-committing himself to football.

"That kind of stuck with me," Ellis says about the exchange. "I was feeling sorry for myself. Every night I went to sleep mad at the world because I wanted to change how I was perceived and what I was doing here. I was tired of being mediocre and just an average linebacker. At the end of it all, I didn't want to look back and be an average linebacker. 'Oh yeah, that was the average linebacker from Northwestern who was from Louisiana.' No. I want to be like, 'That dude's really good.' That kind of just lit a fire in me."

From that point on, Ellis never looked back, using his renewed outlook to capture the starting job at outside linebacker and became one of Northwestern's most consistent players over the course of the season. 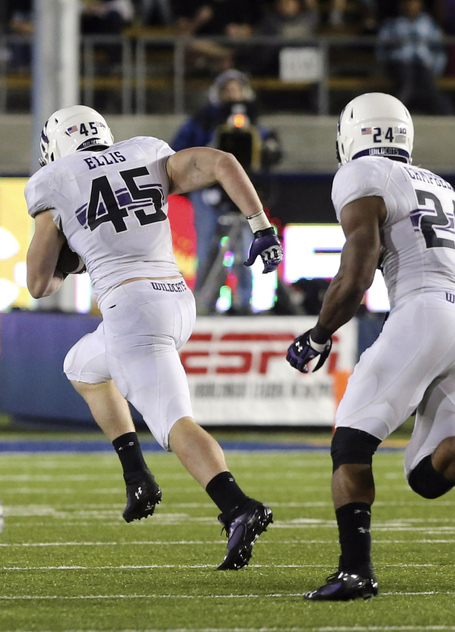 Turning 23 in August, Ellis has been through a lot in his life. On the field, he has battled through two fractured hands, often having to work through games and practices with a club-like cast at the end of either arm. Off of it, Ellis' father committed suicide in 2010. Those things, Ellis understands, are things that he can't control. But taking advantage of what he can control has pushed him to new heights.

"The only disability in your life is a bad attitude. It's true," he says.

Prior to Big Ten Football Media Days, Paul Kennedy, Northwestern's assistant athletic director for athletic communications, already knew that quarterback Trevor Siemian and safety Ibraheim Campbell would accompany coach Pat Fitzgerald to the Hilton Chicago. Others were considered, but Kennedy landed on Ellis, he says while watching him and his teammates do their best GQ impersonations for the cameras.

The reason, Kennedy says, was Ellis' personality. The fact is, the self-described southern boy loves to have fun. After the first day of the event, Ellis, Siemian and Campbell went out in Chicago for what Fitzgerald likes to call "good, clean American fun." The trio asked around but almost all of the other players had to adhere to strict curfews and couldn't partake in the after-hours festivities.

"We went and saw the city, got some food, went and saw some people play pianos," Ellis says about the night without getting into too much detail as his eyes dart around the massive ballroom. "We've kind of just been chillin'."

Ellis noted Fitzgerald encourages the team to have fun off of the field, something he considers to be vital for the squad's development.

"I think that's the stuff that really bonds your team together," Ellis says with a smile. "You get to know guys playing football with them but whenever you're sitting in a meeting room for three hours, all you're talking about is football. You're not talking about, you know. In the locker room, there's locker room talk, getting to find stuff out about people. You really find out a lot about people by hanging out with them, not just sitting in meetings with them."

Over the summer, Ellis and the team hosted a pig roast, which the Louisiana-native called "awesome." They also had a home run derby and while Ellis couldn't recall who won, he was quick to point out that he "went yard a few times."

Ellis senses the impact of these events on the field when it comes to his teammates' communication.

"If you're close with a guy, you can call him out and say, 'Hey. You're not doing what you're supposed to be doing.' But if you don't know somebody, they're going to take that as a direct shot at them. Whenever I can look at my best friend on the team and be like, 'Look, dude, that was terrible. That's not you. That's your action. You need to change it,' that's good," Ellis says.

I didn't want my reputation, my legacy whenever I left Northwestern to be this dude who had potential and then blew it.

Ellis' move from the outside into the middle is as much about communication as anything else. From his spot on the defense, Ellis controls the pre-snap alignment of the front seven after the play is called in from the sidelines. Even if he makes a mistake in an adjustment, he says, the rest of the defense will still go through with it, making trust a necessary component.

"In the game is kinda where I take off," he says. "I'm always getting in guys faces, getting people going. Just trying to be hype and stuff like that."

That new communicative responsibility even extends to week-to-week preparation as Ellis has traded notes with Siemian and wide receiver Miles Shuler on what they look for in opponents. Remember those two interceptions against Cal? Ellis, in part, credits former Northwestern quarterback Dan Persa who often gave him tips on where a quarterback may be looking to throw based on a linebacker's movements.

Along with the mental aspects of football, Ellis also has the athletic ability and instincts to excel at linebacker. But sometimes, the all-out pace at which he plays can get him in trouble.

During spring practice, Fitzgerald spoke about Ellis' transition to playing middle linebacker full time. His eyes, he said, didn't match up with his feet. His feet were moving one direction while his eyes looked in the other.

To demonstrate where he's come since February, Ellis takes a cup of water, a soda, an iPhone and a scrap of paper, shifting them into a diamond-like formation resembling his visual field on defense.

"Imagine this," says the learning and organizational change major like a tenured professor. "The angles are all different."

He points to the two cups and the scrap of paper behind them.

"It's a triangle: guard-to-guard and the running back. I have to see all of this together, moving as one unit. I'm trying to see the whole picture without getting distracted. In the middle it's all like woah, woah and they take off," he says while crossing his arms over and under each other, simulating the crossing patterns of opposing receivers.

The demonstrations may be spot on, but Ellis and his teammates know all too well how hard it can be to execute on the field following a season where the Wildcats lost seven games in a row en route to a 5-7 finish.

At the end of the day, though, Ellis is still the same old fun-loving kid looking to make that one play. He says he doesn't like to get caught up in all of the little things that go into every single play in an effort to avoid the oft-detrimental analysis paralysis.

It was simple too, for Ellis. He reassessed his love for football and enjoyed the game he has played his entire life. And that reassessment led him through a resurgent season, one in which he shifted his own narrative.

Now, Ellis has one season left before he could re-enter "limbo land," but this time, stuck between his years at Northwestern and a potential NFL career.