Update: Putting this at the top of the article now, because apparently people who run shows (and many more of you) don't actually read to the bottom of articles. As common sense and this very article would tell you, Northwestern is not actually putting potted plants in seats. Is the tarp gone? Maybe. We don't know yet. But the tone of the article and the absurdity of the idea should tell you the plants aren't actually replacing the tarp/people at games. If not — and if you didn't read to the bottom of the article to find out for sure last time — now you know. Or, ya know, NU has duped us all and this is happening: 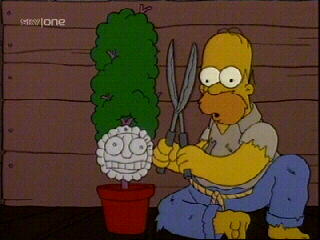 It appears that the tarp is dead.

It was introduced at the beginning of the 2013 on sections 101, 102, and 103 to make the empty seats in the NE corner of Ryan Field look less depressing on TV. The purple tarps with vertical white Northwestern stripes and Under Armour logos came in three pieces and were received with some groans. After all, there is a history of making fun of tarps in college football stadiums.

I still maintain that it was a good idea despite the jokes. I'm not sure if it was worth the money, but it looked better than empty metal bleachers.

Over the winter, Northwestern announced a shakeup in Ryan Field seating. In retrospect, we should have seen the writing on the wall for ol' tarpy. The need for the tarp changed with the student section moving from the northwest to the southeast corner, the young alumni section going away in favor of discounted ticket prices throughout the stadium, and the visitor's allotment section moving from sections 101-103 to the northwest corner. This will result in less of a vacancy in the northeast corner and more of one in the northwest corner. And because the three tarp pieces were cut to fit the exact dimensions of sections 101-103, they were no longer as viable of an option. Maybe they'll keep the tarp, but it seems unlikely. And it appears NU has found a new way to occupy the empty seats.

We have a new, natural tarp (bottom half of 135) pic.twitter.com/b77sHxBV7V

While most visitors at Friday's Meet the Team Night focused on the new video board, my attention was immediately captured by these strange inhabitants of the bottom half of section 135. More were lined up in front of the northeast stands, likely to be placed throughout section 101 and possibly 102.

I initially thought that this would be the final "look," fully mobile and customizable to the ticket situation each week. It is a smart move and should look much better, both in person and on TV, than the tarp. However, I got a close look at the tag on one of the plants and read these are Chrysanthemum Rhapsody Purple. While there might not be a more Northwestern-y plant name than Rhapsody Purple, the appearance I saw Friday night may only be temporary. The  flowers, according to the internet, bloom in the fall, so we may soon have sections full of purple flowers.

I must admit that I was a bit disappointed by this. While we would not get a "Between the Hedges" look with green plants on bleachers, a shrubbery would look pretty natural in Ryan Field. I don't know what purple flowers will look like in a college football stadium. We'll soon find out. Or maybe the grounds crew is not planning on them blooming while in use, in which case they only chose the Rhapsody Purple plants because of the name.

I think we've found the next generation of tarp. Do the A's need a new batter's eye on the third base side in the upper deck? You bet they do. I'm quitting my job and starting a business based on plant tarps. That is until green screens can be used to effectively communicate signals from the coaches in the booth to the players on the field through the use of special electronic helmet visors. I will also be pitching my plant-based college football video game to EA Sports' competitors. The Chrysanthemum Rhapsody Purples vs. the Bells of Ireland? Now on NBC's Botanical Blitz 2015, only for Wii.