The Wildcats look to open their 2014 season with a win after a disappointing 2013 campaign.

It's been a while since Northwestern ended last season with a 37-34 win over Illinois. Before that, you'll recall, the Wildcats lost seven consecutive games, including one on a Hail Mary at Nebraska and one in triple overtime to Michigan. Both were brutal. What does 2014 have in store for NU? More heartbreaking losses? Fewer injuries? Better luck, maybe?

We'll find out over the next three months. The Wildcats' first test, Cal, may not reveal anything significant. The Golden Bears were pitiful last season, and it's hard to believe they'll be much better in coach Sonny Dykes' second year. About that Dykes fellow: He accused Northwestern of strategic injury faking in last season's meeting in Berkeley.

Whether or not the Wildcats were actually hitting the turf between plays with the intent of slowing down Cal's uptempo offense, be prepared for complaints from Bears fans the moment any NU player forces a stoppage in play by (actually/not actually) getting hurt. That's one of several storylines we're all looking forward to.

Here's how you can watch and listen to the game:

And here's a map showing which channel you get the game on: 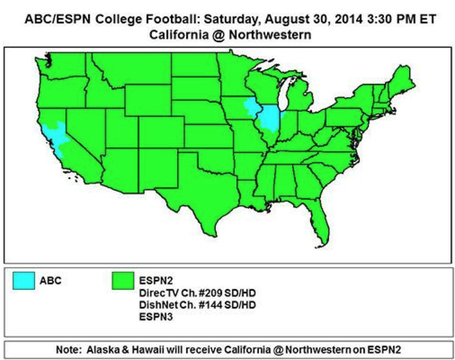 Before kickoff, review our preview coverage, and some other stuff you'll enjoy, from the past week.

- Our picks for the game and predictions for Northwestern's season

- People are freaking about the weather. Should you care?

- A great feature from Josh Rosenblat on Ifeadi Odenigbo. A sampling: "You're a big, black, Nigerian dude," they'd tell him. "Those are all indications of a football player, man. Ifeadi, you're a freak athlete."

- We think NU's going to beat Cal, but if the Bears pull off the upset, here's why it'll happen.

- Names of players on Cal's roster you need to know

- What does NCAA Football 14 think of Northwestern? You may be surprised.

- The Three Things NU needs to do to beat Cal

- Daniel Rapaport examines the rise of receiver Cameron Dickerson, who should see more passes thrown his way with Christian Jones lost for the season

- Josh asks the question: "Will this year be different than last?"

- Who's set to shoulder the rushing workload after Venric Mark transferred?

- Not familiar with the Bears? Do some reading.