The mystery and scandal of Trevor Siemian's 4.38 40 time

Trevor Siemian says he's the fastest QB in Northwestern history -- and almost the fastest in NFL history. So is he a dirty, dirty liar, or has Northwestern's coaching staff failed him -- and us?

Share All sharing options for: The mystery and scandal of Trevor Siemian's 4.38 40 time

After hours and hours of thought, we've come to two possible conclusions about Siemian's claim:

1. Trevor Siemian was joking about how fast he is

IF you've read us over the years, you probably think we're on board with this, and that we think it's good that Northwestern's starting QB has a healthy sense of humor. In the old days, you would've been right. But now that we're operating under our the iron fist of our journalism-first overlords at Inside NU, that's not the case.

If Trevor Siemian made a joke about his speed on NU media day, he was intentionally being dishonest with the fine men and women of the press corps. And after last year's 5-7 debacle, what this squad needs is a LEADER, not a LIAR. Jokes, like stats, are for losers, and we sincerely hope Trevor Siemian is not a loser. Let's pretend this isn't an option.

According to the NFL's website, the only QB to run faster than 4.38 since the advent of electronic timing is Reggie McNeal from Texas A&M, who ran a 4.35. Trevor Siemian is just a hair's breadth away from being the fastest QB since they started measuring.

On the one hand, you'd think we'd be thrilled to have such a dynamic athlete at Northwestern, and thrilled with NU's development staff. After all, look at Siemian's Scout.com profile from 2009. 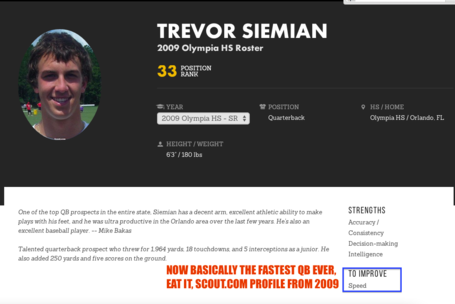 They say you can't teach speed, but Northwestern has found a way to do it.

That'd be nice, but it would also be ignoring a larger problem: The egregious inability of Pat Fitzgerald and his staff to identify and properly utilize the incredible talent they have on roster.

But more importantly, why is Siemian even playing QB in the first place? Last year, only two wide receivers ran sub-4.38 times at the Draft Combine, and both guys were 5'10. Trevor Siemian is 6'3. With his height and blazing speed, he'd be one of the most dynamic wide receivers in the Big Ten, if not the entire country -- not to mention Northwestern history -- even with just mediocre route running ability and hands.

Time and time again, Fitz and his staff have struggled to properly diagnose what position various players belong at. Venric Mark began his career as a tiny wide receiver. Kain Colter played QB, even though he is now very literally an NFL wide receiver. Is Jordan Perkins even on the roster?

We wonder why talents like Kyle Prater fail to develop with the Wildcats. But perhaps more worrisome is this trend. Hopefully Trevor Siemian, proven speedster, can salvage the poor decisions of his coaches by blazing his way to dozens of TD's this season. But if the offense underwhelms yet again, we have to realize that the problem starts at the top.

Fire Pat Fitzgerald, I guess is my point.