The Week 4 edition of the Weekend Rewind looks back at a truly ugly game of football in Evanston, the play of Wildcat quarterback Trevor Siemian, and the possibility of some light at the end of the tunnel for the Big Ten.

Every week, InsideNU writers Josh Rosenblat and Henry Bushnell will wrap up Northwestern game coverage with some final thoughts (we'll try to stay away from topics addressed in game columns), along with our big takeaways from the rest of the Big Ten. Following Northwestern's 24-7 win over Western Illinois, here's the 2014 Week 4 edition of the Weekend Rewind:

Coming into the 2014 season, I was a Trevor Siemian believer. I wasn't really buying the heel injury narrative, nor the ‘it's his team now' narrative. But I thought I had seen enough from him in 2012 and at times last year to believe that he could thrive in what many anticipated would be a pass first offense.

But after just three games, I'm jumping ship. Siemian does have the physical tools - he has the size, he has a decent enough arm, and he's sufficiently mobile. However, his decision-making has been woeful, and it seems he doesn't have what it takes mentally to be a good quarterback at the college level.

Saturday, Siemian again looked flagrantly uncomfortable in an offense that he's now been in for three-plus years. That in itself is shocking. Not only is he making poor reads, he's unwilling to scan defenses and go through his progression before checking down. The result is open receivers running free while the ball goes elsewhere, and a disgraceful 3-for-14 on third down conversions.

It starts before the snap though. A lot of quarterbacks know where they're going with the ball prior the play, and it's a good thing because they've astutely recognized something in the defense's pre-snap alignment. But Siemian knows where he's going with the ball and it's a bad thing because his pre-snap reads are shaky. He'll fixate on a receiver, and doesn't alter his intentions quick enough to take advantage of what the defense is giving him.

He then seems unsure of himself in the pocket - timid and scared even. And it showed in his throws. Good quarterbacks instinctually snap off throws the moment they see something they like. But Siemian's feet nervously pitter-patter a few too many times before he aims the ball at a receiver. And more often than not, the hesitancy is costly.

Much has been made of offensive coordinator Mick McCall's poor playcalling so far this season, and it's certainly a contributing factor. But this offense can't function without a sharp decision-maker at the helm. And Siemian is being exposed.

Already without Tony Jones, who has missed the last few weeks with an injury, the tweet above lists four Northwestern starters who left Saturday's game against Western Illinois with an injury. Obviously, Pat Fitzgerald gave no indication as to how serious any of the injuries are and we won't really know until practice during the week. To lose Dickerson would be a huge blow to the wide receiver group that's already missing Jones. It's a group that lacks explosiveness already and Dickerson provides a big, athletic target.

Gibson and Campbell are two of the corner stones of Northwestern's defense and Ellis is, according to some players, the most vocal and active voice in the locker room. On the field, he is consistently one of the most active players for Northwestern on a game-to-game basis. Injuries happen to everyone in football, and that's where luck comes in. Northwestern may be clutching a four-leaf clover pretty tightly this week.

Around the Big Ten

Yes, it was against two MAC teams, and yes, it's only one week, but perhaps two teams emerged Saturday that can restore some Big Ten pride. Both Wisconsin and Michigan State put in nearly flawless performances.

The Spartans shellacked Eastern Michigan 73-14. They led 49-0 at halftime, and only some garbage time drives allowed EMU to eclipse 100 total yards of offense on the day. Connor Cook only needed to throw six passes - five of which he completed - as MSU forced six turnovers in the rout.

Up in Madison, Wisconsin delivered one of the most absurd box scores you'll ever see, almost reminiscent of the 2012 Big Ten Championship game. It speaks for itself: 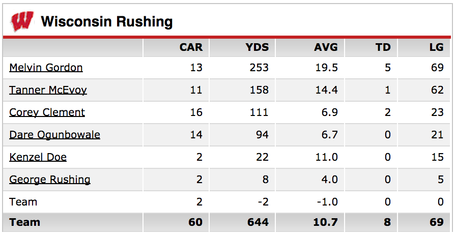 Both Sparty and the Badgers have already lost a game this season, and neither squad is by any means flawless, but both can and will help the Big Ten maintain (or regain) respectability. And perhaps they'll meet in Indianapolis in December for what could be a great matchup for the conference.

Man, what a day for the Big Ten.

After being blasted for its poor performances during the season's first few weeks, the Big Ten went 12-1 Saturday. The biggest win of the day though belonged to the Indiana Hoosiers, who beat No. 18 Missouri in Columbia.

Indiana's role in the Big Ten football landscape has always been a little questionable, but in recent years, it's been Indiana's job to be one of the most "fun" teams in the conference. "Fun," in this case, doesn't really equal "good." "Fun," rather, means scoring a ton of points.

Take a look at some of these stats from the past season and a half: Over its last 15 games, Indiana has scored more than 30 points 10 times. The Hoosiers have only won six of those games. In fact, over the entire 2013 season, Indiana didn't win a game when it scored fewer than 42 points and still came away with five wins on the year. That's bad defense at its finest.

Whenever Indiana takes the field, video game numbers are inevitable and it's exciting to watch. But on Saturday, the defense "held" Mizzou to "just" 27 points to clinch the Big Ten's biggest victory so far this season. Indiana is a dangerously fun football team, and the Hoosiers showed it this week.

Stat of the Week

Innacurate Wikepedia Edit of the Week

It wasn't a great Saturday for Brady Hoke, and Michigan fans (presumably) decided to have some fun during a weather delay: