You sent the kids to the game: A thank you

It was an incredible day for this group of Evanston youth.

Share All sharing options for: You sent the kids to the game: A thank you

Yesterday was a pretty special day at InsideNU and Lake The Posts. Not because Northwestern finally won a football game, but because we were able to send over 80 kids to the game, all because of the generosity of our awesome combined readership.

Last month, InsideNU and LTP announced our "Send the Kids to the Game" initiative, which aimed to send kids from Y.O.U. Evanston who might otherwise lack the means to a day at Northwestern and a football game. We set a goal of $3,000 to send 70 kids to the game, and in less than a week, we had surpassed our goal. Overall, we raised $3,535, and demand for the game among Y.O.U.'s kids and families was even greater than expected.

The day began at an Evanston school district building near ETHS where the kids were treated to a breakfast of bagels, fruit, yogurt and juice. Then they got to hear from two speakers, who spoke about the importance of going to college. One was current Ulta Beauty CEO and former US Cellular CEO Mary Dillon, who was a first generation college student from the South Side and told the kids how she was able to work her way through college at UIC.

Next was former Northwestern linebacker Doug Szymul, who served as an incredible role model for the kids. He attended Maine West and told the kids about how he wasn't the greatest natural student, but worked incredibly hard and wound up going to Northwestern to play football, and eventually got jobs with ESPN and BTN after college. Plus, he gave advice to a kid (who was wearing an adorable retro NU jersey) advice on how to become a defensive lineman.

After Doug talked, the kids got Northwestern t-shirts and hats, then hopped on the bus to go to the game. Many of the kids told me it was their first Northwestern football game, and they got to see a Wildcats win. While the weather cut out the tour of the school after the game, it was still an awesome day, and Y.O.U. executive director Seth Green was extraordinarily grateful for your generosity, as were the kids and parent chaperones who were able to attend.

"I heard from many of our youth and families at the end of the day that their experience truly deepened their understanding of the importance (and fun!) of a college education," Seth said.

There are some pictures below, but first, I'd like to thank a few people:

- Y.O.U. was an amazing beneficiary, and they worked a lot to help a college senior who had never put together a benefit before. Specifically, thanks to Seth and Jesse Chatz for letting me bug them far too often.

- Thanks to Doug Szymul for being so great with the kids, and to Mary Dillon for taking time out of her busy schedule to talk to them.

- Mike Zoller at the Northwestern ticket office helped us get the tickets together under short notice and got them all hats to go along with the tickets.

- Maureen Palchak in the athletic department helped us find Y.O.U. as the beneficiary and worked with us to make sure we had the facilities necessary to hold the benefit.

- Dave and Cindy Gaborek at Let's Tailgate gave us an incredibly generous t-shirt order, and they accommodated us on the day before the event when we needed to add more shirts due to the increased interest in the event among Y.O.U. kids.

- I'd like to thank all of the chaperones and the people who helped set up. Callie Counsellor did a lot of work to set up on the day of, as did a number of Y.O.U. staff members.

- Jay Sharman, the man behind Lake The Posts, was a tremendous partner in this. He generously gave up his time to come help out with the benefit and to set it up in the first place. The community at Lake The Posts is outstanding, and Jay has done an incredible job building it. It meant a lot that he was on-board with this idea from the beginning, and he was instrumental in seeing the idea through. Without him, there's no way this benefit would have happened.

- And last but not least, I want to thank the InsideNU and Lake The Posts communities. Jay and I decided to put this together because we knew how great our communities were, and we thought we could all work to give back. You guys gave a big group of kids a fun day that they won't forget, and hopefully it got a lot of them to see just how attainable (and fun!) college can be. You're all amazing, and I can't thank you enough. 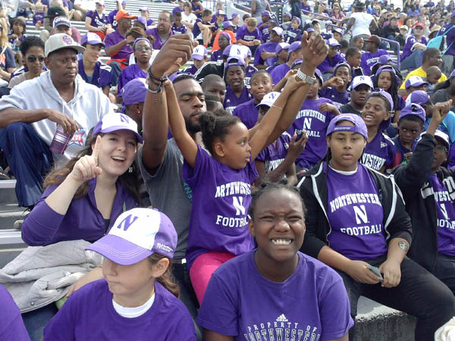 (Some of the kids at the game with their shirts and hats.) 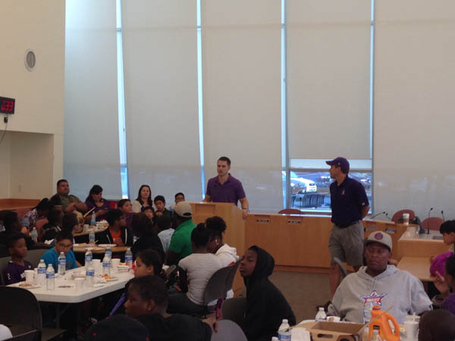 (Doug Szymul talks to the kids.) 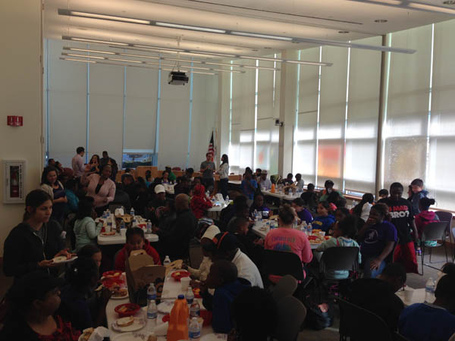 (The kids at breakfast.)

If you're interested in doing more to help Y.O.U. achieve its goal of powering youth in the Evanston community, please visit youevanston.org.