Why Northwestern was able to run against WIU, and why that holds little hope for the future

Share All sharing options for: Film Breakdown: Outside Zone Against Western Illinois

That was disturbingly as expected.

The defense didn't do anything spectacularly bad, but they gave up a few big runs and were vulnerable through the air. 4 takeaways and a strong third and fourth down performance (4-17 on third and 2-5 on fourth) kept the scoreboard clean after the opening drive, which is nice, but overall not terribly reassuring heading into conference play.

Offense was a mess. The running game had its best day, with 38 carries for 175 yards once you take out the kneeldowns and sack, but those numbers aren't all that exciting against a FCS opponent. Furthermore, many of the same issues that plagued the running game in the first two games were still present, with improved results being primarily a result of WIU being a not terribly good FCS team; more on that below.

Siemian had a bad day, and, while overall the receivers were improved, Dan Vitale dropped a pair of big gains, which is disappointing from a guy who is supposed to be an impact player. The Zack Oliver bandwagon has picked up a few riders, and it's probably worth taking a look at him if bad Trevor continues to show up every game, but I wouldn't expect miracles.

Over the last few years, Northwestern was primarily an inside zone team. This year, the inside zone has been mostly ignored in favor of outside zone, a play that was a (usually ineffective) bit player in those offenses. Northwestern's version of the play is a "pin and pull" scheme, which has the uncovered linemen pull to the playside to lead the runner; see the video below for Glenn Mason-era Minnesota running the scheme. (HT: Smart Football)

Against Western Illinois, the play provided some solid gains and a pair of touchdowns. Let's take a look.

On Northwestern's first drive, the offense lines up in a 2x2 formation with Treyvon Green as the running back. Western Illinois has only 5 defenders in the box, though both sides of the formation have an alley player looking to provide run support. 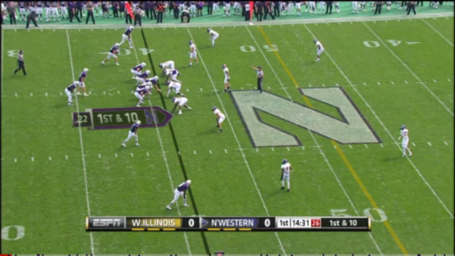 This is a good look for a run, and Northwestern goes with outside zone to the short side of the field. 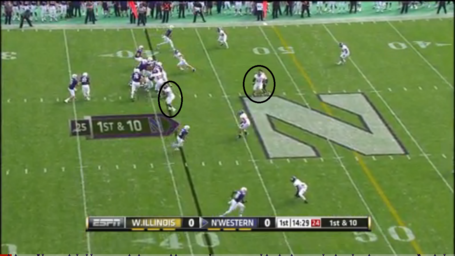 NU leaves the backside defensive end unblocked; this is normal, as he should not be able to run the play down from behind. The rest of the defense cooperates nicely with the run, as the middle linebacker (circled) drops into pass coverage in the middle of the field and the playside alley player shoots inside, where Dan Vitale makes an easy block to seal the edge. The offensive line pins the defensive linemen inside, and there is a huge lane on the outside; with no linebacker trying to fill it, Eric Olson pulls all the way from right tackle without finding anyone to block. 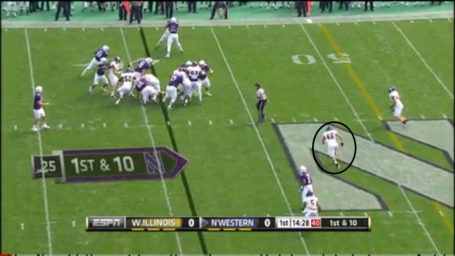 Green turns the corner for a 25 yard gain.

While leaving the backside end unblocked worked well against WIU, it hasn't always. Here we have a first down against Northern Illinois, with Solomon Vault as the running back. 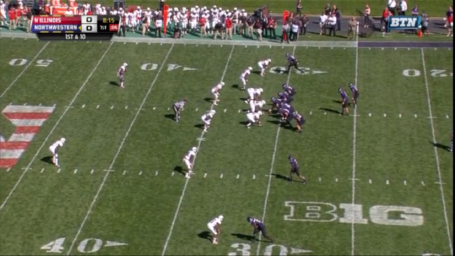 The numbers here are once again good for running, with only 5 in the box, a backside alley player, and nobody in the frontside alley. 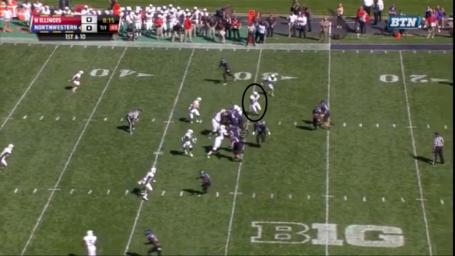 At the snap, linebacker Ladell Fleming (circled) and the backside cornerback both chase hard. The frontside blocking is actually quite good, as one expects in a 6-on-5 situation, with the NIU defense being driven wide and downfield. 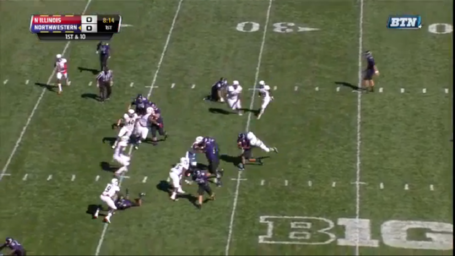 But Fleming is able to catch Vault from behind, limiting the gain to 2 yards. Northwestern is actually hurt a bit by how much the defense was moved outside, as Fleming is able to run unobstructed; if the "pin" part of the play had gone better, his path might have been obstructed.

There are ways to take advantage of overagressive pursuit of the outside run; expect more reverses if NU continues emphasizing the play. But to a certain extent, being run down from behind is a possibility the offense accepts in this scheme. Against Western Illinois, the risk is pretty small; against better opponents, expect to see more plays like the NIU example. 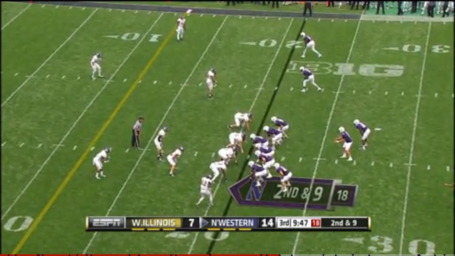 Northwestern has two tight ends left, and WIU is throwing numbers at that side of the formation: the defensive line is shifted that way, with a 1-technique DT weak and a 3-technique strong, while four other players pack the box, all to the left of the center. This defense looks vulnerable to many things, but an outside run to the left is not one. 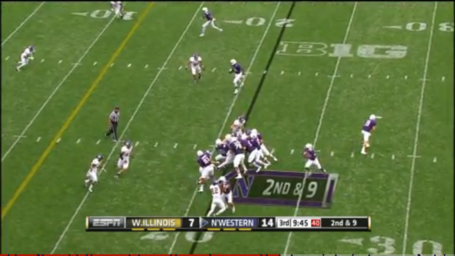 The blocking is OK, opening a lane between the tight ends, but because of the starting alignments WIU has two defenders to fill the hole. 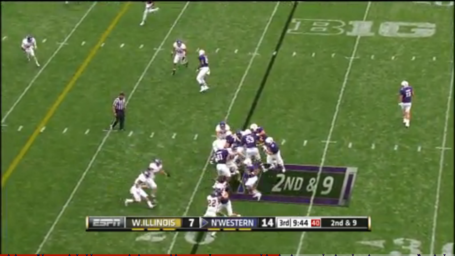 This is not a good situation for your running back. 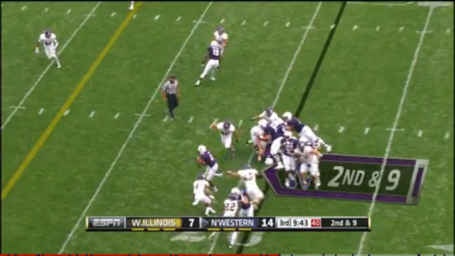 Jackson makes the best of a bad situation, planting his foot and getting downfield. Because this is Western Illinois, both defenders overrun the play, leaving one to make a comical tackle attempt as Jackson goes in for a touchdown. Michigan State would not be so obliging; fortunately, they aren't on the schedule, but plenty of teams better than Western Illinois are.

It was nice to see the running game working better on Saturday, but Western Illinois's weaknesses had a lot more to do with it than any changes to Northwestern's approach. I would love to be wrong, but I expect that the future of the outside zone this season looks more like Solomon Vault being chased down for a 2 yard gain or Miles Shuler suffering from a complete failure of blocking than Jackson avoiding two defenders with the simplest of moves.

I'm fairly sure Northwestern can win if they manage 5 interceptions, with 2 returned for touchdowns.