NU's offense has been messy and stagnant so far this season. More read option passes could open things up.

Through three games of the 2014 season, Northwestern's offense has been stagnant. It's statistically one of the 10 worst in FBS, and even a simple film breakdown earlier in September revealed several issues.

Just looking at it superficially, one thing that has evaded NU thus far is easy yards. Northwestern has moved the ball at times, but every throw seems to be into a tight window, and most runs seem to require a broken tackle or slippery move from the ball carrier.

There are countless problems to pinpoint. The receivers and superbacks have been subpar; play design has been uninspired; and an identity has become muddled. These aren't going to change overnight. But Trevor Siemian and the offense need more things at their disposal to unlock opposing defenses, and the following is an explanation of one of them.

To begin, let's look at an exemplary execution of one variation of the read option pass. It's crucial to understand that this is a concept rather than a specific play, and not all read option passes look the same. But nonetheless, all variations have a similar effect on a defense.

The play we'll look at is a classic example. The Philadelphia Eagles have the ball in the red zone against Washington. It's 2nd-down and goal from the 12-yard line -- not actually an ideal down and distance for a read option pass because the expectation would be pass plays on both 2nd and 3rd down. But it works to perfection.

The Eagles line up with three wide receivers to the long side of the field, a tight end to the right, and a running back alongside quarterback Nick Foles. Washington counters with a nickel package and a six man box. 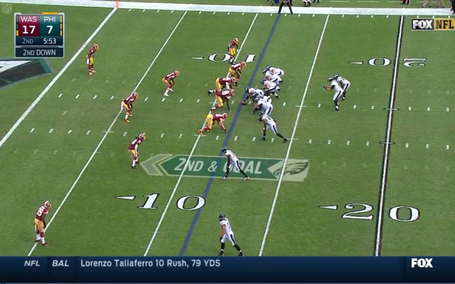 However, notice Washington safety E.J. Biggers (30), playing as the nickelback here, who already has his eyes in the backfield at the snap. Biggers and the two linebackers are the defensive players that the play will target. As Foles takes the snap and goes to place the ball in his running back's stomach, his eyes are on the linebackers. Meanwhile, the focus of all three of those defensive players is in the backfield. 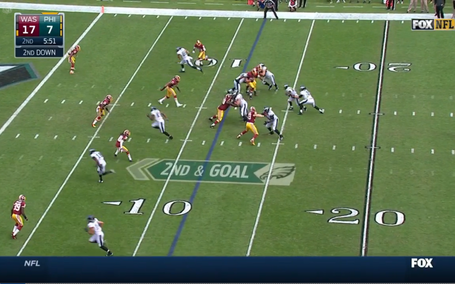 One of the linebackers has even crept up towards the line. When Foles sees this, his read is simple. He pulls the ball back, and wide receiver Jordan Matthews (81) is already behind the second level of the defense: 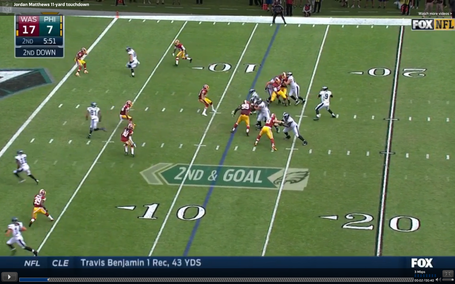 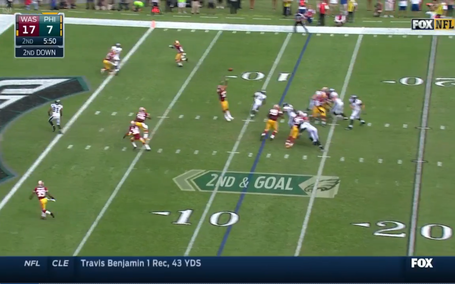 Below is the film from two different angles. The basic concept is that by adding the read option to a pass play, the defense becomes indecisive. Whether it's for a split second or two full seconds, at least one (usually more) defensive player strays from his pass responsibility on the play, and that opens up space for receivers to operate. Here, that slight hesitation from the linebackers opens up the middle of the field. And in football, even just that slight hesitation and that split second can make all the difference.

Northwestern and the read option pass

To be clear, Northwestern does employ the read option pass -- occasionally. This 1st-down play from Saturday's win over Western Illinois might've been an option play, though it also could've just been straight play action:

This play, like the Eagles play we looked at earlier, was successful specifically because of the possibility of a run. Dickerson doesn't get much separation, and Siemian still has to make a very good throw, but watch how open his throwing lane is, and how much space there is between the second and third levels of the defense. That's because the linebackers have gravitated towards the threat of the run.

However, NU underuses the concept in its offense. First off all, offensive coordinator Mick McCall should've realized by now that Siemian's legs are not a major weapon, and therefore the read option pass should be far more prevalent in his offense than classic zone reads.

On the following red zone play, Northwestern either runs a zone read or a simple outside run play. But one of the reasons it's unsuccessful is that the defense doesn't honor Trevor Siemian as a rusher.

If it did, Siemian likely would've attracted the player that eventually disrupted the play. So since Siemian isn't magically going to cut a few seconds off his 40 time, the remedy to this is to go with a run-pass option rather than a run-run option. Then the defense has no choice but to honor the second option, and if it doesn't, Siemian can pull the ball out and throw to a receiver over the middle in the back of the endzone.

The usefulness of incorporating read options into the passing game was also evident on normal pass plays. On NU's most disastrous play of the game, Trevor Siemian's red zone fumble, take a look at WIU's linebackers. Then check out Treyvon Green's role in the play.

The play looks like it's designed to go over the middle, but WIU's linebacker inhabits the exact space to which Siemian wants to throw the ball. And Green is nonexistent here. A pass from Siemian to the flat does Northwestern no good in this situation. So why not use Green in a play action or a read option pass concept to open up some of that aforementioned space?

With a pocket passer in the offense Northwestern wants to run, run-pass options need to be a staple. Siemian said Wednesday that right now, it is something that "we sprinkle in there just to keep defenses honest." But it needs to be more than that.

When asked about his reads on Wednesday, Siemian made sure to note that he thought a lot of his mistakes had been physical. But that's part of the point. Going back to the Eagles play, even a physical mistake from Foles — a slightly errant throw — still likely would’ve resulted in a touchdown. The read option pass can eliminate some of the risk of those physical mistakes, and can increase Siemian’s window of opportunity and room for error.