Pat Fitzgerald has out-recruited James Franklin ... until this year

For all the hype Franklin has gotten as a recruiter, Fitzgerald won far more head-to-head battles when Franklin was at Vanderbilt.

Share All sharing options for: Pat Fitzgerald has out-recruited James Franklin ... until this year

Ever since taking over at Penn State, James Franklin has been tearing it up on the recruiting front. The Nittany Lions have the 12th-ranked recruiting class in the nation in 2015, according to the 247 Sports composite, and they already have a five-star and a four-star for 2016.

Franklin's mantra has been a clever one since he arrived in State College: "Dominate the State." Except the state also includes Maryland and New Jersey. It may sound tacky, but it's worked. (Also, Black Shoe Diaries is selling these shirts.) 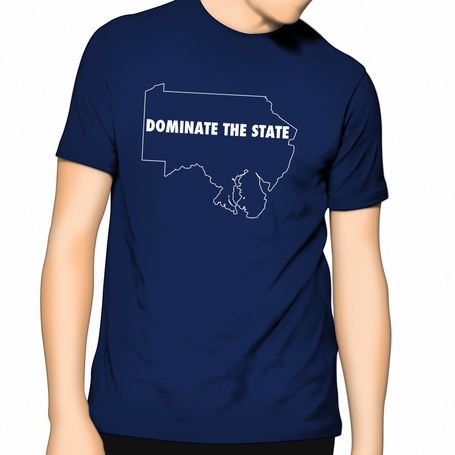 Since coming to Penn State, Franklin has earned the recruiting hype he's receiving. And to no surprise, he's out-recruiting Northwestern. Pat Fitzgerald referenced on Monday that all three of the Nittany Lions' linebackers had NU offers and none even took a visit, so NU isn't going to win many recruiting battles with PSU. But is it the coach or the school that's doing so well for the Nittany Lions?

The long answer is probably both, but for all the hype he got in recruiting, Franklin tended to be out-recruited by Fitzgerald when he was at Vanderbilt, which is probably about as difficult to recruit to as NU. We took at look at how Fitzgerald and Franklin stacked up when going head-to-head in recruiting during Franklin's tenure at Vanderbilt, and it really wasn't even close. 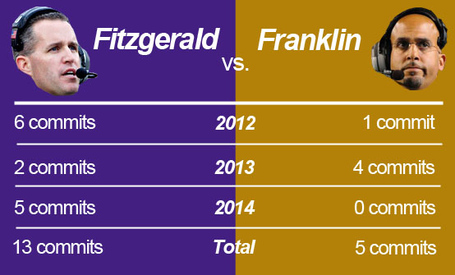 Of course, this doesn't mean a lot. Franklin has the Penn State job now, and by all accounts, he's doing very well there. However, it's interesting to wonder what Fitzgerald could do with a big name job (at least, from a recruiting standpoint). If he were at Penn State right now, would the Nittany Lions still have one of the top classes in the nation? My guess is they'd be just fine.