Northwestern used to be one of the faces of the spread offense in college football. But has offensive coordinator Mick McCall deviated from what made NU's offense so successful?

There were quite a few complaints following Northwestern’s 31-24 loss to Cal this past Saturday. But one of the more concerning issues was the offensive playcalling. Aside from one gimmick play, the offense was unimaginative, and frankly it almost seemed antiquated.

Back in the day – the early years of the 21st century, to be specific. Northwestern made a name for itself as one of the pioneers of the spread offense. NU opened the eyes of the football world and befuddled defenses with prolific offensive displays, like the one in a 54-51 win over Michigan in 2000 that has been referred to as "the most important game in the history of the spread offense."

But as the spread offense has evolved – it is ever-changing – is it possible that it has left Northwestern and offensive coordinator Mick McCall in the past? I’m not going to pretend like I know football Xs and Os better than McCall, but a simple comparison of NU’s offense to other spread attacks – I’ve chosen Cal’s and Baylor’s – is slightly alarming.

To start, let’s just layout the basic principles of the spread offense: a lot of it is about spacing. Essentially, the more spread out a defense is, the easier it is to take advantage of space. Football is technically always an 11-on-11 game, but there’s a huge difference between playing 11-on-11 in a confined area and playing 11-on-11 in a more spacious area. The latter is advantageous for the offense. Additionally, one of the objectives of the spread is to create sections or moments within a play where the offense can effectively play, say, 2-on-2, or 5-on-5 or 7-on-7, rather than 11-on-11.

But at its roots, it all comes down to spreading the field, and taking advantage of the space that that creates based the look the defense gives. Let’s first take a look at how Northwestern tries to accomplish these two things, and then compare that to Cal and Baylor.

First, we go to two early-2nd-quarter plays for NU. On 1st-and-10 from their own 22-yard line, the Wildcats lined up with two wide receivers to the left of the formation, Miles Shuler to the right, one inline superback to the left, and a running back to Siemian’s left. 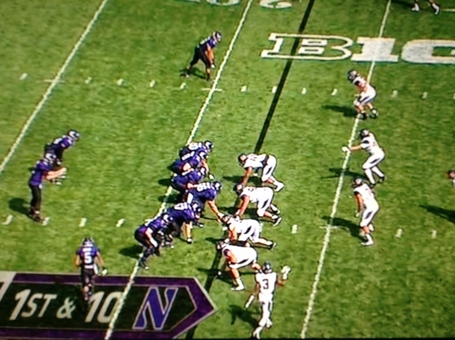 Cal lined up with two deep safeties (not pictured), but the other nine players four yards or fewer from the line of scrimmage, and six of the nine in the ‘box.’ As Northwestern sent Shuler in motion from right to left, Cal shifted to the alignment shown, which at the snap basically became four down lineman backed up by four linebackers. Thus, taking Siemian out of the equation (he would hand the ball off), Northwestern was playing 8-on-8 on the middle half the field. And to make it worse, within that 8-on-8, Cal’s defense had more width. That’s not effective spacing, and the ensuing play, a wide receiver sweep to Shuler, got blown up for no gain.

On the next play, 2nd-and-10, NU comes out with a very similar look but to the opposite side of the field. Cal counters with two deep safeties, three defensive backs in press coverage, three linebackers, and three down linemen. 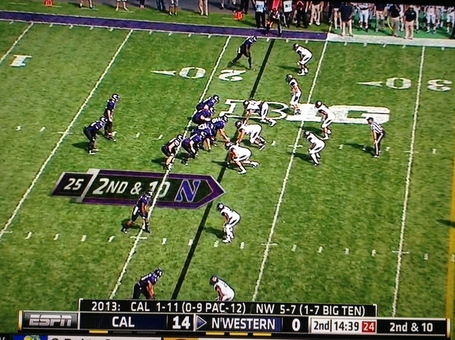 Here, the problem isn’t Northwestern’s spacing – it’s actually pretty good – but how the Wildcats attack the Cal defense given the look they get. Here, in the middle of the field, Northwestern is seemingly playing 7-on-6 (again, not including Siemian). But rather than take advantage of that, McCall goes with a slow-developing pass play. The play ends up being a catastrophe because NU pulls a guard away from where Cal’s blitz comes from, and Warren Long inexplicably fails to pick up that blitz. But nonetheless, the logic behind the playcall, given the defensive alignment, is faulty.

You can argue that the call is made without the knowledge of Cal’s alignment, but if there’s nothing built into NU’s offense that allows Siemian to change plays at the line, or check to a run play here, that’s a significant problem.

Now let’s look at Cal’s offense from the same game. On a 1st quarter 1st-and-10, the Bears line up in a formation similar to the two that NU used. The only slight differences are the positions of the tight end/third receiver to the left, and the running back (opposite side of Goff). And just like NU got, Cal gets a look that features a six-man box. 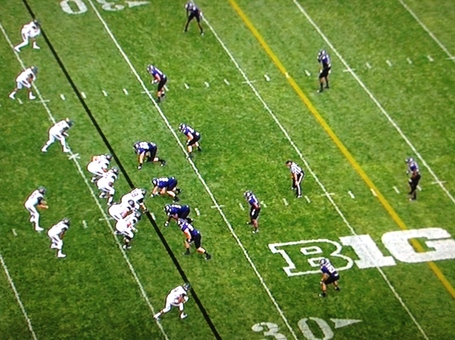 As we saw with NU, this gives Cal 7-on-6 in the middle of the field. But whereas Northwestern failed to take advantage, Cal does so, and, unsurprisingly, the hole up the middle is gaping and the inside run gains seven yards.

Now let’s turn to Baylor, whose offense, when it comes to creating space and subsequently exploiting defensive alignments, is exemplary. Remember, this is something Northwestern failed to do on the plays that we looked at earlier.

Again, here’s a play from the Bears’ Sunday game vs. SMU where they spread the field and get favorable numbers – five-man box! And just look how wide the field seems! 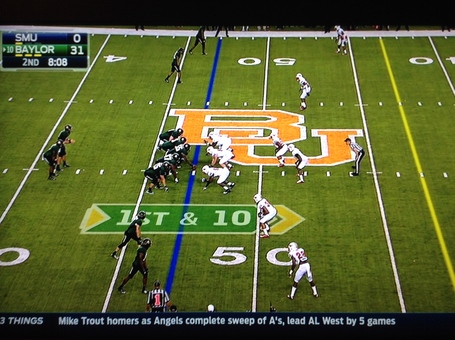 Earlier in the game, they came out in a similar formation, the only difference being one of the wide receivers tucked in as an H-back. But this time, SMU showed a seven-man box, with the near-side corner playing off the receiver. 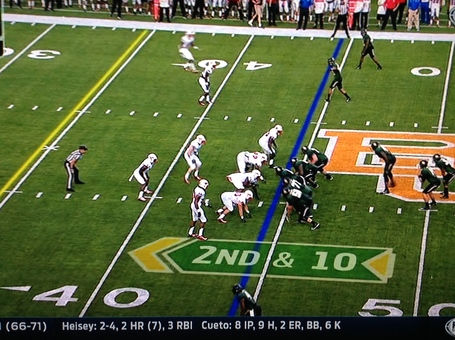 That meant space on the outside, even to the short side of the field. So rather than run, it looks like Baylor QB Bryce Petty checks to a pass, and before his running back even gets to him for what could be either a handoff or a play action fake, the ball is out of Petty’s hands and on the way to his receiver for a 6-yard gain. And if the corner misses a tackle, it's likely a touchdown.

Here’s another similar example from later in the game:

Obviously we can't comprehensively critique Northwestern's offense by looking at a few plays. And obviously what transpires on the field schematically is more complicated than what I've just dissected. But there are aspects that are as simple as numbers -- it's better to play 6-on-5, or even 6-on-6, than 7-on-7 or 8-on-8 -- and these issues that I've looked at weren't just confined to a few plays. They were far more prevalent. There's no quick fix for something like this, but it just seems like Northwestern has gotten away from what makes the spread offense so effective.

Another thing that evidently hinders NU’s offense is their pace. I’m not talking about pace in terms of time in between plays and hurry-up, no-huddle offense – I’m talking about the time it takes for plays to develop. Let’s take a quick look at two plays from the weekend. One is a crucial 3rd-and-short for Northwestern. The other is a Baylor play that we looked at earlier.

This is just one example, but consistently throughout Saturday’s game, the ball spent too much time in Siemian’s hands. Just like in other sports, the quicker the ball moves, lesser is the defense’s ability to react and cover space. It’s unclear whether this comes down to Siemian, the receivers, or the offensive scheme, but it certainly is one of the reasons that Northwestern’s offense didn’t look crisp on Saturday.

Another major gripe with Northwestern on Saturday concerned the offensive philosophy, or identity if you will. Our Kevin Trahan summed up the issue perfectly:

"Personnel is not a problem, and this group has the talent and explosiveness to be at least an above average Big Ten offense. But with gameplans like the one Saturday, it's going to be difficult for this group of players to live up to their collective potential.

Northwestern is a spread team through and through - the Wildcats are even credited with popularizing the offense. But last year, and in the first game of 2014, NU has been unwilling to fully commit itself to the spread, even though it has all the personnel to be successful.

Too often, the Wildcats abandon the spread and all of its advantages - "spreading the field" and forcing the defense to be responsible for more space, namely - to become a situational power team. A number of times on third-and fourth-and-short, NU went with a power run against a stacked box and failed to convert. With the power look, the defense knew what was coming and stacked the box, not having to be responsible for anyone on the edge.

NU offensive coordinator Mick McCall has put together some genius offenses in the past. The Colter/Siemian/Venric offense of 2012 fully committed to the spread and flummoxed Big Ten teams, as did the pass-heavy Mike Kafka offense that Siemian suggested we would see this year.

If the personnel in 2009 and 2012 could be successful in the spread, this team absolutely can. But hardly anyone - especially this team - is going to be successful in such a strange, situational spread/power hybrid that doesn't just allow the offense to go."

There’s really not much to add to that.

It seems that the new innovations in the spread have flown over NU’s and McCall’s head. As I wrote Sunday, the offense has become "stagnant and rudimentary," and until that changes -- until McCall injects something into his system that can confound defenses -- the offense will remain mediocre. And as long as it is, Pat Fitzgerald faces an uphill battle to turn Northwestern into a Big Ten contender.