Here are reasons why Northwestern will probably beat NIU

After a false start in Week 1, Northwestern will snap back with a victory over the Huskies in Week 2. Here's why the Wildcats will crush their oppo-OH MY GOODNESS LOOK AT THIS DOG

Share All sharing options for: Here are reasons why Northwestern will probably beat NIU

1. They ain't got Jordan Lynch

Jordan Lynch was a college football experience. Statistically, he leaves behind one of the most incredible statlines imaginable: From Bill Connelly's NIU preview:

In two years as Northern Illinois' starting quarterback, Jordan Lynch helped the Huskies win 24 games, passed for 6,000 yards, rushed for 3,700, scored 24 touchdowns, passed for 49 more, lost a single MAC game, led NIU to the Orange Bowl, and ended up a Heisman finalist. These are not things that are supposed to happen. Lynch was one of the most effective rushing quarterbacks in college football's history and packed four years' worth of stats into two years.

The fact that Jordan Lynch is no longer the quarterback for the Huskies does not mean they cannot or will not be good. They had a not terrible defense, and he was not their only offensive player. Before Northwestern lost to Cal, NIU had already crushed FCS Presbyterian 55-3. Sure, it's FCS Presbyterian, but still: 55-3, with 424 yards rushing. They have other players besides Jordan Lynch.

But Jordan Lynch was as close to irreplaceable as a single player can be at the college football level. He's the reason they were nationally relevant, and thats why he was a Heisman finalist. He's gone, and that alone should make NIU worse than it was the past two seasons.

2. We run this state

Northern Illinois is located in the north of Illinois. Unlike the people that founded Northwestern, NIU's administrators paid attention to where their school was located when deciding the school's name, which on its surface seems like common sense, but when you think about it, ruins any potential element of camouflage/surprise.

In 2014, it's obvious that Northwestern is the premier football school in the state of Illinois. No, we haven't been to a BCS game in this century like both Illinois and NIU. Shut up. Shut up! SHUT UP! But we have dominated the head-to-head against our in-state rivals in that time.

Since 2000, the Wildcats are 14-5 against teams from the Land of Lincoln, with all five losses coming against Illinois. (We also have nine wins against the Illini in that time, so, we the champs.) Of course, some of those haven't been fair -- Eastern Illinois, Illinois State, and Southern Illinois are included -- but drop those and NU is still 11-5, winning over two thirds of their games. If "since 2000" seems like cherry-picking, well, we would've used the all-time stats, but Northwestern's 8-26-3 record against the University of Chicago made that not fun.

3. This is a school in mascot transition

However, Diesel retired after the 2013 season after nine years at the husky helm.

He has been replaced by Mission: 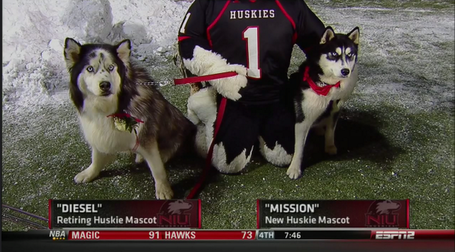 We don't know if this dog can even high-five cheerleaders. Can this dog lead NIU as Diesel did in the past? How will the rudderless Huskies possibly be able to win without the year-to-year puppy steadiness? 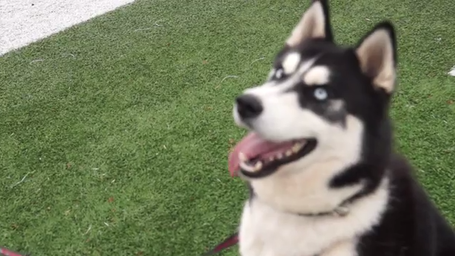 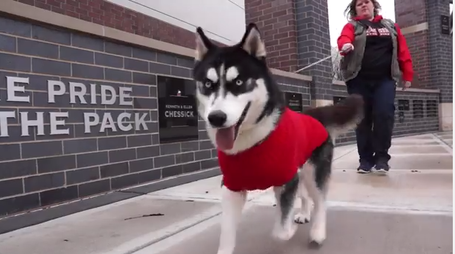 We think it's pretty obvious from the above adorable pictures that Northern Illinois is absolutely doomed under an inexperienced puppy.

Surely you're familiar with Dr. Jim Phillips, Northwestern's athletic director. Well, before Dr. Jim was NU's AD, he was NIU's, and a damn good one: in 2007, he was named Athletic Director of the year, and followed that up by hiring Jerry Kill, who would set the Huskies on a winning track before being hired away by Minnesota.

Then Dr. Jim got the hell out of NIU, seizing at the opportunity to leave the rising programs he'd set into place in favor of Northwestern. However, it's obvious Phillips had Northwestern on the brain well before he ditched DeKalb:

.@NIUAthletics You mean this guy, who was wearing a #Purple tie even when he worked in DeKalb? #B1GCats#CatsNDogs pic.twitter.com/6aixjgSDf4

The No. 1 rule of being an AD is wearing a tie of the team you are the AD for. Just look: 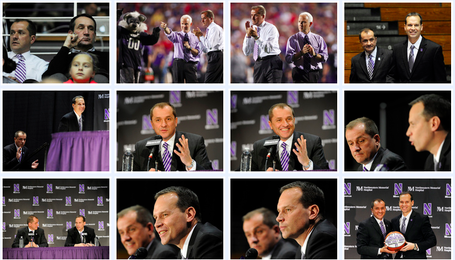 We defy you to find a single picture of Jim Phillips since he's been hired at Northwestern not wearing a purple tie, or, if without neckwear, without a prominent purple item. Meanwhile, in his profile pick at NIU, he was rocking NU colors.

This is a school whose leaders can't even be pictured going in the right color direction. What hope can they have on the field?

A notable NIU alum is Dan Castanaletta, who you may know as the voice of Homer Simpson from "The Simpsons," as well as  Grampa Simpson, Barney Gumble, Krusty the Clown, Groundskeeper Willie, Mayor Quimby, Hans Moleman, Sideshow Mel, Itchy, Kodos, the Squeaky Voiced Teen, Gil Gunderson, and any other voices they need him to make in a certain episode.

In one episode, Homer coaches Bart's football team, and does an egregiously bad job coaching the team. First, he makes Bart the starting QB over Nelson, who is clearly better, then he cuts everybody on the team, including the show's production staff and the lady who shushes after the credits:

He's left with just Joe Namath, who while a QB legend, hasn't played since the 1970's and is only one person, incapable of winning football games.

With such poor talent evaluators around DeKalb, how can anybody trust NIU's coaches to properly put a team on the field?

6. Avon Barksdale doesn't have the will to win

Another notable NIU alum is Wood Harris, who plays Avon Barksdale in "The Wire." Let's not focus on the actual character arc of Avon Barksdale, in case some of our readers haven't watched "The Wire," because seemingly nobody actually watched "The Wire" while it was on TV. Let's just focus on one of Avon's rare sports moments, which for some reason is not embeddable.

After Avon blows up at the ref for making a bad call, the ref, fearing for his life, meekly offers a do-over. However, this just irritates Avon more. He tells the ref his job was to do his job, and that nobody was going to hurt him over basketball, and demeans him for being a coward unable to stand up for his own opinion.

Of course, Avon was wrong. As Sports McSportsman said in 1932, "winning isn't everything -- it's the only thing." (Mr. McSportsman died three days later, unable to subsist off of winning during the heart of the Great Depression.) If you're a successful drug lord and a ref offers to bend his job to allow your team athletic victory, you take it. I also think he should've made it clear that it's okay to do murder for sports wins, because I agree with that.

It's clear from Barksdale's behavior Northern Illinois breeds an environment where winning is less important than various non-winning substances. It's also clear that Stringer Bell ends up in like seven movies a year while also starring in "Luther" while McNulty and Avon wait for calls to come in, which makes us sad.

They wore these in the season opener: