A film breakdown of Northwestern's loss to NIU

There was at least one interesting play that could benefit the offense.

Share All sharing options for: A film breakdown of Northwestern's loss to NIU

Northwestern's defense gave up another long passing touchdown; this is officially a concern. Otherwise, they were pretty solid, shutting NIU out in the first half (with the help of a missed chip shot FG) and allowing modest production for the full game. They won't be posting any shutouts, but they should keep things respectable.

The offense, on the other hand, was brutal. Miles Shuler's drop of a sure TD was the lowlight, but there is plenty of blame to go around: the receivers dropped several other passes and looked out of sync with Trevor Siemian on a number of plays, the running backs weren't making much happen, and the offensive line was horrendous in both the run and pass game. Bright-ish spots: Kyle Prater led the team in catches and receiving yards, nearly matching his previous career production in one day, and Chris Gradone was much improved at punter. He will get plenty of chances to show what he can do as the year goes on.

Statistically, one thing stands out: NU went 14-23 on third down, and gained 21 total first downs. It's great to be consistently converting on third down, but if you almost never get first downs before then, you will struggle to move the ball. This would improve with better execution, but there is also an issue of offensive philosophy here NU doesn't have much of a home run threat from the running game, and the passing game emphasizes possession over big plays. NU needs 10+ yard plays to chew up yardage on first and second down; if the backs and receivers don't create them naturally, the game plan needs to change to take more risks in their pursuit.

Nothing important, but an interesting play that caught my eye.

On first and ten from their own 23, NU lines up with trips right and a tight end left. 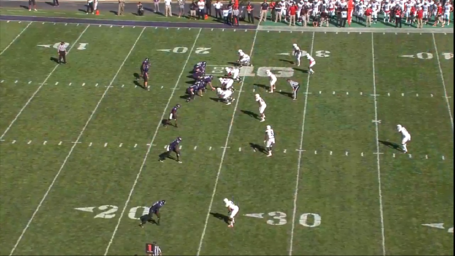 Before the snap, the back motions left, and NIU slides a defensive back out to match him. 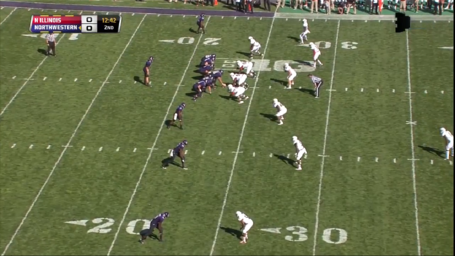 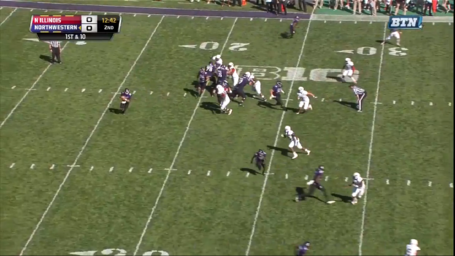 The interesting thing is that Dan Vitale follows Mogus from his tight end position, and Mogus kicks out the unblocked defensive end. Meanwhile, right tackle Jack Konopka releases downfield to block a linebacker; this looks like the line is setting up a shovel pass to Vitale. But instead of the shovel pass, Siemian fires to Miles Shuler running a quick out from the slot for a 4 yard gain; unfortunately, he goes down while making the catch and misses a chance to turn upfield. 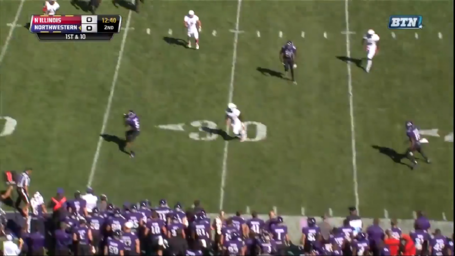 This looks, to me, like an adaptation of the shovel pass scheme that NU used with Vitale and Kain Colter. That was an option scheme, with Colter reading an unblocked end. 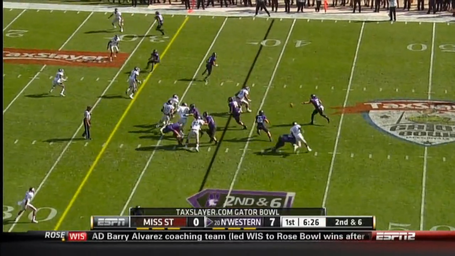 Indeed, the receivers here are running the same routes, so it might not even be an adaptation, just how the play looks when the DE stays inside; I can't remember an end resisting the urge to go after Colter, for obvious reasons. Siemian isn't much of a threat to keep, so once he gets outside he is throwing all the way, while the pulling guard now blocks the end instead of leading Vitale into the hole. My guess (and it is only a guess) is that Siemian is reading the defender lined up over Shuler; if he gets outside to defend the pass, the play goes to Vitale, while if he stays inside to stop Vitale, the play goes outside. An alternative theory is that the first read is still on the end, with the pass reads taking over if he stays inside. Outside, Siemian has a curl/flat read, so the play isn't dead if another defender takes away the short throw, though the defensive end should be able to get off his block pretty easily, so the read and throw need to be quick.

No injuries during the bye, please. NU needs to clean up a lot of fundamental issues; that seems unlikely midseason, but who knows. See you for Western Illinois.