Fourteen things every freshman should know about Northwestern football

Welcome to campus! Here's what you should know before you attend your first game at Ryan Field Saturday.

Share All sharing options for: Fourteen things every freshman should know about Northwestern football

So you're finally here. After months of waiting, you're about to start school at Northwestern. But unless you're one of those outlier NU students who actually likes sports, you might already be in over your head when you get to are forced to attend the Wildcats' game against Eastern Illinois on Saturday.

If you know nothing else about this football team, know Pat Fitzgerald. Fitz is so cool. You can tailgate at "Fitzerland." Fitz is the coolest (read on for more). He's young, he's a former player (one of the best NU has seen in a while), and he was a captain on the 1995 team that went to the ROSE BOWL. The Rose Bowl is basically one of the biggest, most well-known bowl games in college football, if you're new to this whole football thing. And he led this school — your school — to that promised land. He's a fiery leader, he loves his fans, and he sometimes coaches in shorts. Frat life Fitz.

There's even a verb — "Northwesterning." 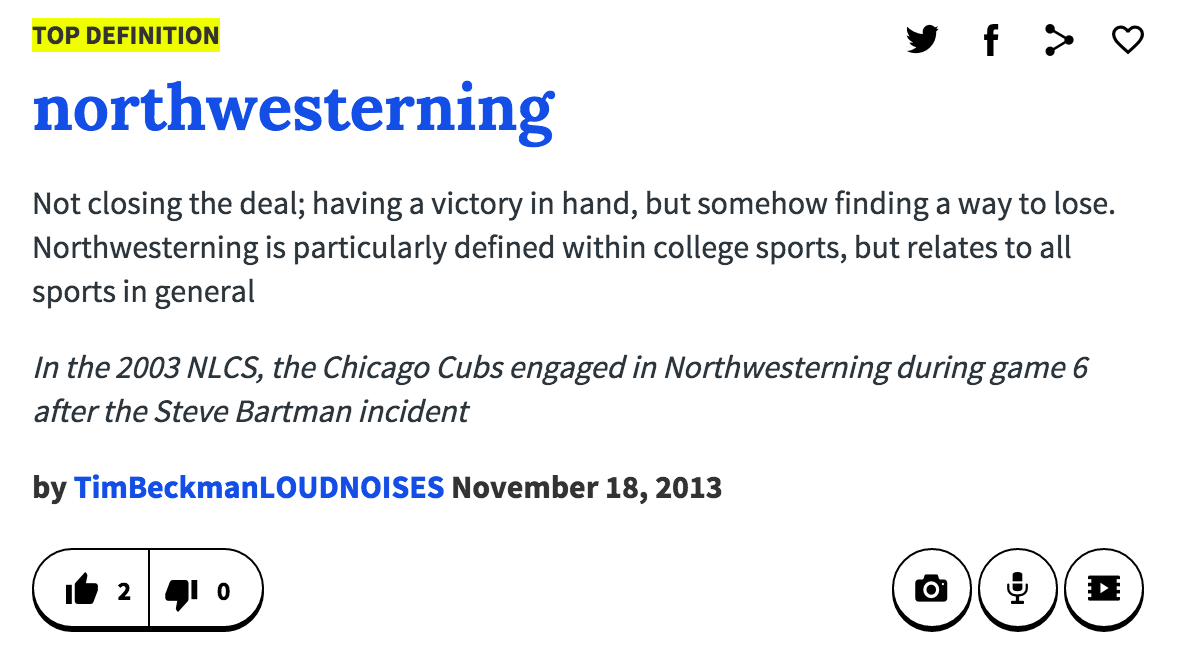 (Thanks, Urban Dictionary! Also, shoutout to user TimBeckmanLOUDNOISES, he might have to change his name soon though.)

They'll come all the way back and then lose by one. They'll blow huge leads (the biggest lead ever, in fact.) They'll slip on a game-winning two-point conversion. They'll lose on a Hail Mary. Northwestern football will find a way to break your heart. But they're YOUR lovable losers.

3 BUT THEY ALSO WIN SOMETIMES, AND WHEN THEY DO IT'S GREAT

Last year, we got to do this:

And if you travelled to the Notre Dame game, you got to do this.

And, like, I know you're thinking, "Oh boy, I'm going to the nerdiest Big Ten school" and "The only team I can brag about is women's lacrosse."

But really, the Wildcats are already 1-0 on this young season, beating Stanford (take that, nerds). Northwestern has been just okay the past two seasons, but in 2012 the Wildcats won 10 games. Out of 13. That's better than most of my test grades. They also won the Gator Bowl, beating Mississippi State, which was really cool considering it proves Big Ten geniuses can beat, well, you can imagine what Mississippi State's academic rigors are.

And you're coming at the right time. Quarterback Clayton Thorson is a redshirt freshman. Running back Justin Jackson is just a sophomore. See below so you make sure to know these guys. They are going to be beasts while you're rocking the purple at Ryan Field. There's a ton of young talent on this team.

4. Put Your Hands Up In The Air

Every home game at the start of the fourth quarter, someone, probably famous — but only if you're from the Chicagoland area — will appear on the JumboTron and say, "It's the fourth quarter, it's time to put your hands in the air." Or something along those lines. Then a cheesy song from 2005 made by some Belgian guy (Danzel) will start playing over the entire stadium. These adorable little kids will give you a general idea:

Your arms will hurt, which will make you realize that you definitely never achieved that summer bod from getting to the gym, but, hey, it's something.

Some people (they shall remain nameless) hate this "tradition" with a burning passion while most other people are just simply indifferent to it. I put tradition in quotes because this was started in 2010, so it's not exactly a long standing thing. Anyway, just have fun with it, it's dumb, but it's our dumb.

You'll learn it at Wildcat Welcome (and then forget it shortly thereafter), don't worry.

6. Keys and moving the chains

Before every kickoff, all the students take out their keys and shake them at the field for, well, debated reasons. It's pretty dumb, but just do it.

Also after every first down somebody will yell "What time is it?" and the proper response is "It's time to move the chains, Whoosh." At that point you move your arm in the direction the team is going. Try not to get the direction wrong, you'll look dumb. It happens to the best of us though.

Yes, that was a long time ago, and yes, you should still care. Other than maybe the 2013 Gator Bowl win and the Rose Bowl appearance in 1996, this is the pinnacle of achievement for Northwestern Football. The Wildcats defeated the University of California 20-14 as PeeWee Day (solid name) intercepted a Cal pass in the final minute to seal the deal for Northwestern. They'll probably show the highlights from this game at Ryan Field at some point; they did last year. Ask your grandpa about it.

8. Go to the games early

Here's an inside tip, if you arrive at a football game about 30-45 minutes before kickoff, you can sit where ever you want. You can just walk right up to the front of the student section (yes even as a freshman) and get on national television, or probably BTN but whatever, it's TV. Then, not only did you have a great time at the football game, but you've got a brand new profile picture too. And your parents knew you were having a great time too (though, depending on the extent of your pregame activities, you might not want that.

There's also one more reason to go to the games early...

You have to go a little bit earlier to get food, about an hour or so, but it's worth it because, you know, you get food. Also Fitz brings you that food, and then thanks you for coming to the game. It's pretty cool and did I mention that you get free food? YOU WANT FREE FOOD FROM FITZ. FITZ'S FREE FOOD. F***ING FANTASTIC.

He is the running back. He is very good. He will be very good for the next three years.

He is the quarterback. Quarterbacks are important. And while he's not great yet, he could be very good for the next four years.

Come on don't roll your eyes. Points 10 and 11 are important. If you already know this then great, good for you, but a lot of people don't. Case in point, at the Stanford game, somebody behind me yelled "Go Justin Jackson!" really loud, about one second before the PA announced "4 yard rush from Warren Long." It was very comical, but don't be that guy (or girl). Also not knowing the players is a dead giveaway that you're a freshman, so if you want to impress everybody, study up on the roster.

You're going to be hearing a lot about this throughout the year, especially from people who actually went to the game. Just smile and nod your head if somebody brings it up. Or better yet, read about it and go watch the highlights, they're pretty swell.

13. Northwestern is really good at upsetting good teams... for some reason

Directly related to the Notre Dame win is that the Wildcats are oddly good at winning against teams that are supposed to be better than them. Wisconsin, Penn State and Notre Dame last year, and now Stanford. Northwestern steps up when it counts.

Unfortunately, they also lose some pretty dumb games, like against both Northern Illinois and Illinois last year. So as you'll soon learn, it's a give and take with this team. But let's focus on the positives.

14. You're allowed to have fun

Here's the thing. Sometimes football games can be really fun. Other times they can be not so fun. But your level of enjoyment directly correlates with how many fellow students (or fans in general) you have around you. The more students, the better the atmosphere, the more fun. It's simple.

So please just go to games. Far too few students actually care about the sports teams here, and it's a shame. The games are a blast, especially when the team is playing well. Just go, even if it's just once, I swear you won't regret it (as long as the game isn't against Michigan). If football's not your thing, that's fine, but just go for the atmosphere. It's college, you can stay out late, you can have fun with friends, and you can do all that and more at the football games. I MEAN, YOU GET IN FOR FREE. (Actually, the games are included in your tuition so you should definitely go now.)

Anyway, just enjoy your freshman year. It goes by fast. From all of us at Inside NU, we hope you have an awesome freshman year, and we hope to see you filling the stands and cheering on your school. Go 'Cats!