It's Jan. 12, and Northwestern has just knocked off Wisconsin to move to 3-2 in Big Ten play. Standing in a back room of Welsh-Ryan Arena, Chris Collins can't stop praising Bryant McIntosh, who just scored 28 points and added 5 assists and 4 rebounds.

"Forget about guards, he's one of the best players in the Big Ten," the head coach says in his post-game press conference. "You ask coaches in this league, this kid is an elite, elite player."

And for that night, he was. This season, McIntosh showed vast improvements, expanding his game by getting to the basket more often and more effectively, upping his rebounding and assist numbers considerably, and cutting down on his turnovers. But after that breakout performance against the Badgers, McIntosh's shot left him, and his effective field goal percentage plummeted in conference play.

Nevertheless, Collins has the guy he needs running the show. McIntosh showed a lot of veteran savvy in his second year in Evanston, all while demolishing the school's single season assist record. If there's a point guard that's going to lead the program to new heights, it's Bryant McIntosh.

The following numbers are taken from kenpom.com.

Like his backcourt mate Tre Demps, McIntosh played an astounding number of minutes this year, and he was able to maintain a high level of play in several categories. He had a fantastic assist rate and a solid turnover rate considering his high usage. Additionally, his defensive rebounding percentage took a major step up, and on a per game basis, McIntosh increased his rebounds by more than one (2.5 to 3.6) and his assists by two (4.7 to 6.7) between his freshman and sophomore seasons.

But it wasn't all good news for McIntosh, whose shooting took a major dip in conference play. The point guard only hit 27.6% from behind the arc in Big Ten play and just 40.4% from the field overall against conference foes. His effective field goal percentage of 40.8 and true shooting percentage of 43.9 were far cries from his overall numbers on the season as well as major drop offs from the marks he had in conference play last year (48.6 and 52.5, respectively).

Shot charts via Shot Analytics. Move your cursor across the chart from side to side to move between 2014-15 and 2015-16. 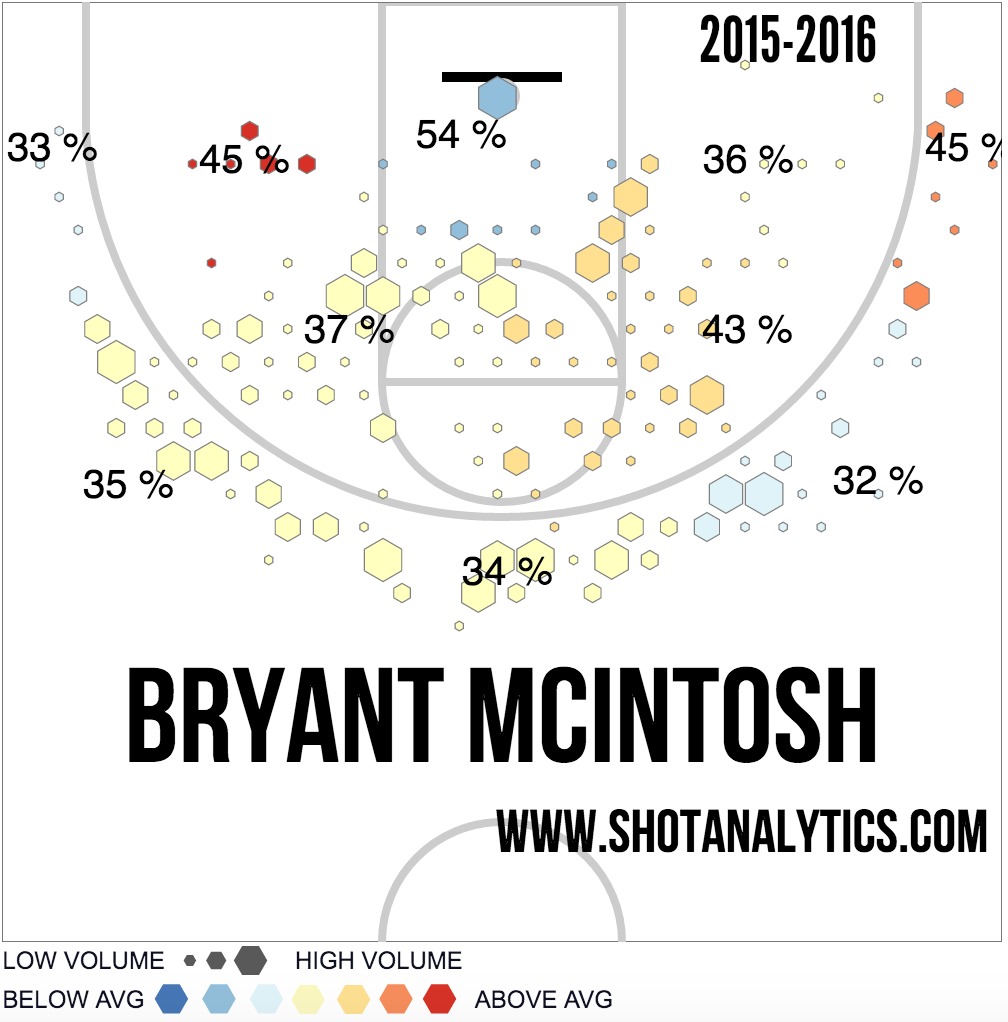 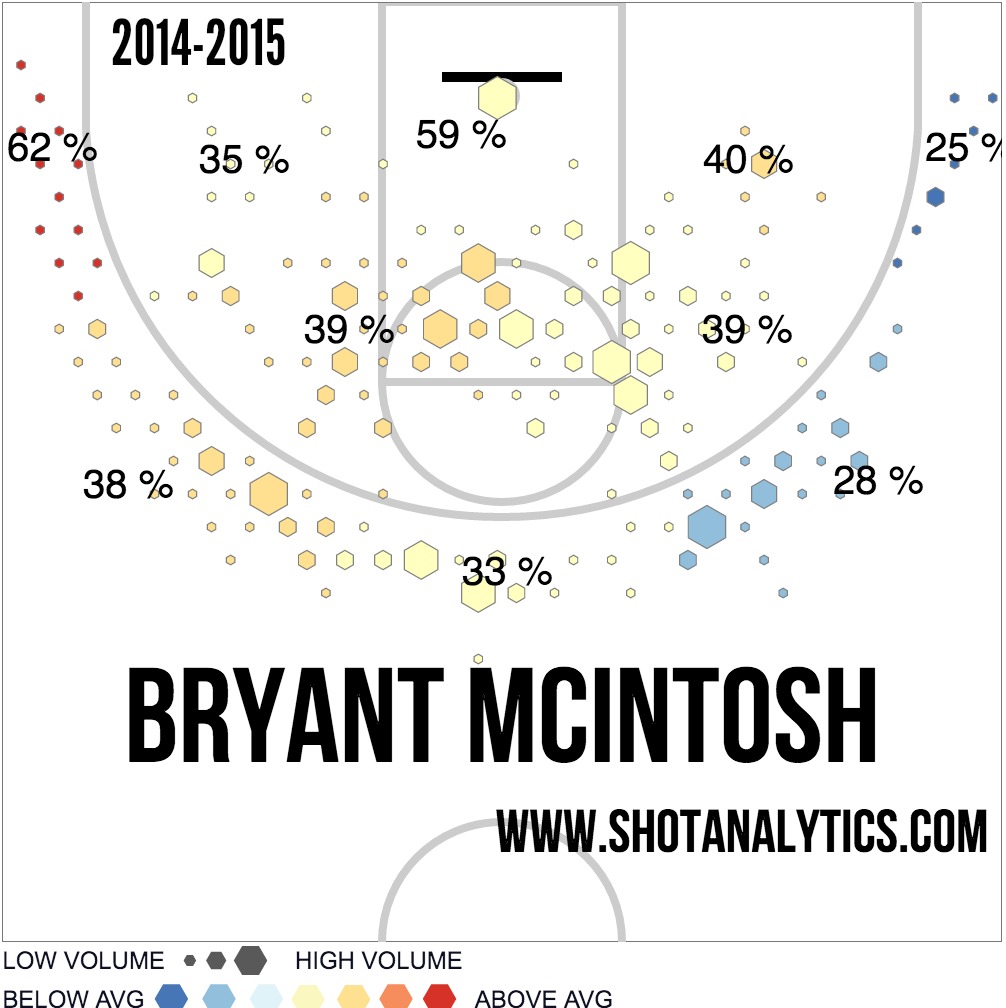 McIntosh is a relatively high-volume shooter who in both his freshman and sophomore seasons took over 40 percent of his shots from between 5 and 20 feet away from the rim. It was interesting to see that McIntosh, despite adding muscle in the offseason, actually got to the basket at a lower rate (23 percent of his field goal attempts).

McIntosh is a fantastic distributor of the ball who doesn't turn it over often — he finished fourth in the Big Ten in assist-to-turnover ratio at 2.73, behind only Lourawls Nairn Jr., Mike Gesell and Denzel Valentine. A big part of that was the pick-and-roll game, in which McIntosh was superb at times. Wisconsin couldn't figure out how to stop him. Despite the poor shooting in conference, he commands attention as a shooter off the pick; if his shot recovers next year, he could be much more dangerous in this area. Additionally, with the expected improvement of Dererk Pardon, an athletic big man who showed upside in these situations, McIntosh could break his own assist record next season. Improvement from the players around him will help overall.

It's tough to be a top-tier point guard without a consistent jumper, and it's tough to beat top-tier teams without top-tier points guards. Northwestern went 1-8 against NCAA Tournament-bound Big Ten teams. McIntosh, not coincidentally, shot over 50% in just two of those games, the win over Wisconsin and the overtime loss to Michigan. He shoots a considerable amount of threes, and when he wasn't making them, it allowed defenders to sag off a little bit to cut off driving lanes. In conference play, McIntosh's free throw rate of 17.6 was lower than his 21.3 conference mark as a freshman. As he struggled shooting, he also struggled to get into the lane and draw contact.

McIntosh may never be the long-range marksman his coach once was, but he can certainly get better at finishing through contact at the rim, and that's what he should focus on, especially considering how infrequently he gets to the free-throw line relative to other top guards. If McIntosh isn't going to get to the stripe, and his jump shot isn't always falling, scoring in the paint will be key. One way to do that is with his left hand, which he rarely uses around the rim. McIntosh added an underhanded right-hand scoop shot on the left side of the basket that he employed throughout the season, and of course he has the floater, but he'll need to develop more ways to score in traffic.

If Northwestern is going to get to the NCAA Tournament in 2017 or 2018, McIntosh is the guy who will have to lead it there. There aren't many sophomores who beat their school's single-season assist record by over 50. There aren't a lot of players who have shown the ability to go toe-to-toe with Melo Trimble, as McIntosh has done on two occasions in his career. His obvious improvements as a ball-handler, passer and all-around player helped this team tremendously, even if the team as a whole didn't take the step forward it had hoped for. If McIntosh can find consistency in his jumper and improve as a finisher, he will open up more for the offense, and perhaps take this program to where it's never been before.