The big man overcame a foot injury to become a major contributor to late season successes.

On December 30th, Wildcat fans had every reason to forget about Alex Olah.

A week removed from news that Olah would be out "indefinitely" with a foot injury, his replacement, Dererk Pardon, blasted through the Nebraska frontline with 28 points and 12 rebounds in under 30 minutes of action. Olah wouldn't even see the court for almost three weeks.

But after shaking off rust in his first few outings, Olah returned to form in a big way. He was one of the lone bright spots in the disaster in Assembly Hall, was the focal point of Northwestern's upset bid that fell short in Ann Arbor, and closed his Northwestern career with a 19 and 8 game against Nebraska and a 20 and 13 game (including a ridiculous, falling-onto-the-seat-of-his-pants buzzer beater) in the Big Ten Tournament against Michigan.

Olah's senior year wasn't rainbows and sunshine, but even after a pretty significant injury, he made it clear that Northwestern's going to have a big 7-foot gap in its rotation heading into 2016-17.

Alex Olah's 2016 was darn near identical to his 2015. He was slightly more efficient on 2-point shots, took slightly fewer threes and hit them at a slightly higher clip, but didn't get to the line at the same rate and saw his free throw percentage dip. Still, only two Wildcats (Pardon and Aaron Falzon) had a higher offensive rating.

He was an effective defender as well, notching a top-100 block percentage nationally despite not being a leaper by any stretch, and he was able to do it without fouling (more on that in a bit). It's an unspectacular stat line for Olah, but it sure is consistent. 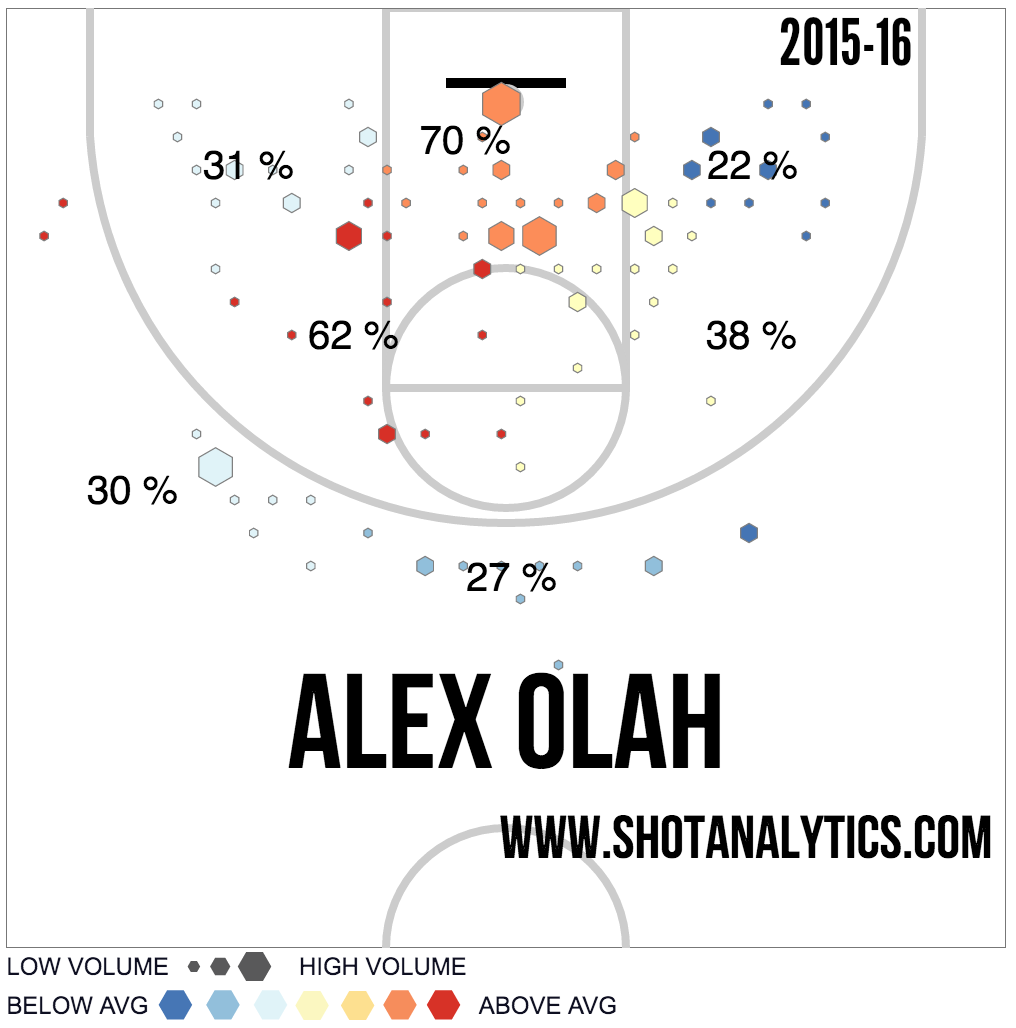 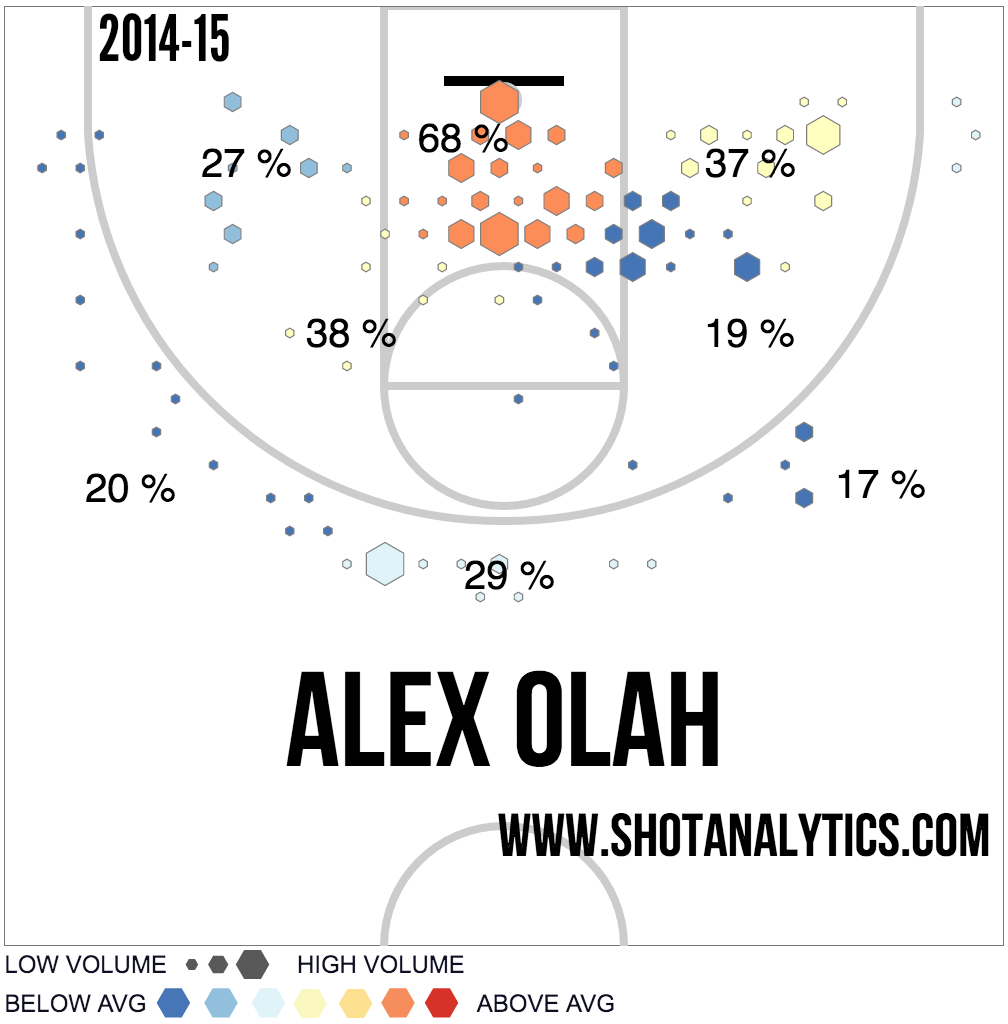 Alex Olah is not a lockup post defender. The switch away from man to zone two years ago was as much to do with Olah's inability to check Big Ten centers as it was to do with penetration from guards. But he was by leaps and bounds the best interior defender Northwestern had this year. His combination of positioning and size turned him into a very good rim protector.

It also kept him from getting into foul trouble.

Only Bryant McIntosh (2.3 fouls committed/40 minutes) and Tre Demps (.9 FC/40) had lower foul rates than Olah's 3.7 FC/40 clip. Unlike the backup centers Pardon (5.8 FC/40) and Joey Van Zegeren (8.1 FC/40) or even true power forward Gavin Skelly (6.2 FC/40), Olah could be trusted to not commit cheap fouls. Extended playing time for Pardon or incoming freshman Barrett Benson is going to lead to a lot more cases of heavy foul trouble than the center position and Olah experienced this year.

The Northwestern offense is not going to miss Alex Olah jump shots. The narrative of Alex Olah stretching out defenses at the 5 spot is overblown. Teams were well aware of his limitations as a shooter and were more than willing to let him take shots from 15-feet and out. When he hits, it's awesome and fun and it forces teams to overcommit. But that just didn't happen very often.

Olah's 19 points against Michigan were great, but the 6 three pointers he took (of which he only hit 1) were not. Against Purdue, it felt like Chris Collins asked Olah to take more outside shots, but he went 1-5. More often than not, possessions that ended in Olah jumpers were empty possessions. Pardon, while perhaps more limited, doesn't take as many bad shots.

Alex Olah could score in a lot of ways. Over time, he developed a couple of good post moves to become a credible back-to-the-basket threat. He moved into space pretty well off pick-and-pop situations, and when he was hot, he was a problem for defenses to adjust to. Dererk Pardon is way more athletic than Olah, but is also way more one-dimensional. But Olah's biggest value added to this team was on the defensive end. Unless Barrett Benson comes in as a legitimate Big Ten post defender (which virtually never happens with freshmen), Northwestern is going to struggle to slow down scoring bigs without getting into foul trouble. Olah came a long way in his 4 years in Evanston, and make no mistake, Northwestern is going to struggle to replace him.