Before the season started, many expected Scottie Lindsey to take a bigger role on the team or even have a breakout season, especially given Vic Law's injury. Maybe he could even become a reliable starter by the end of the year. After showing glimpses of his scoring talent in his freshman year, the possible upside for the sophomore from Illinois was huge.

Those rosy outcomes did not happen, even as Lindsey showed occasional flashes of brilliance. Lindsey was mainly used as an offensive spark off the bench and was quickly pulled if he was not shooting the ball well. While his instant offense and three-point shooting proved key in some games, his below-average defense and inability to be a secondary ball-handler stunted any chance at significant minutes. Often, it simply came down to "good Scottie" versus "bad Scottie."

Lindsey started the season well and earned himself a spot on the starting lineup after a blistering 26-point barrage against New Orleans. But after three games, Collins dropped him back to the bench, and he stayed there for the rest of the season. Sometimes he would come off the bench and hit a three that helped Northwestern's offense, but other times he was a liability on defense and his shooting was off.

Overall, Lindsey showed significant improvement in his offensive efficiency and shooting percentage, but he fell far short of any hopes that he could make the starting rotation and improve other aspects of his game. Lindsey showed flashes of being a key player for Northwestern's future, but he also disappointed on many occasions.

Lindsey had his good games and his bad games. He scored a career-high 26 points against New Orleans and hit 6 three-pointers in a game that would otherwise be completely forgettable. His best game in Big Ten play came against Illinois, in which Lindsey scored 18 points off the bench and hit four three-pointers. He also had 2 assists and 2 blocks in that game.

But in some games, Lindsey did not play much of a role on the court. He had four games with zero points and he did not play at all in Northwestern's blowout loss to Michigan State — clearly something Chris Collins did to send a message to the sophomore. Lindsey's role as an occasional offensive spark off the bench meant that his production was essentially feast or famine. When Lindsey could contribute on offense, he played. When he could not, he sat. There was no middle ground.

Overall, his offensive rating improved significantly and his effective field goal percentage also increased. Lindsey greatly improved from three-point range, helped by his three-point outbursts against New Orleans and Illinois. However, Lindsey's usage did not change at all from last season, meaning that he was still unable to gain much of a foothold in the rotation or in the offense. That being said, he did make better use of his time on the floor. 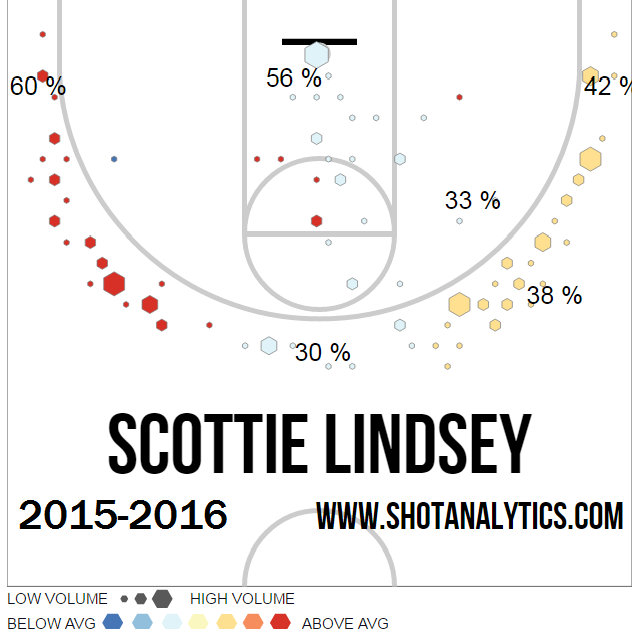 Lindsey's three-point shooting improved across the board. The number of shots he took increased, but his shooting percentage also increased, which is a good sign. He shot 60 percent on threes from the left elbow and left corner. Lindsey appears to be more comfortable shooting from the left-hand side of the court. He isn't too bad on the right side either, as his shooting percentage also increased there. His two-point shooting had negligible improvement.

When he's feeling it, Lindsey can catch fire from behind the three-point line, and really stretch the defense. He showed marked improvement shooting it from deep when compared to his freshman numbers. Combined with his size and athleticism, Lindsey has the physical tools and skills to be an important contributor on the offensive end, whether off the bench or as a starter.

Having mentioned the good, the bad is what can often plague physical talents like Lindsey: effort and consistency, especially on the defensive end. Lindsey just didn't seem to be in every game. Yes, he had the impressive game against New Orleans. He also had a nice four-game run following his benching against Michigan State, scoring in double digits in three of those games, shooting 17-for-29 from the field. But he shouldn't need a midseason benching to get him focused. Lindsey has to be prepared and interested in every game, something he didn't show this year. It also showed on the defensive end: when he was into games, he was active and used his length to his advantage. When he wasn't into it, he was sluggish on the defensive end, committing dumb fouls and rotating slowly.

Perhaps the offseason focus should be just that: focus. Lindsey is someone who can make a big difference simply because of his skillset. But skills are worthless if the effort isn't there. Lindsey needs to show a sense of urgency this offseason, or else he could realistically be looking at losing minutes to a returning Law and incoming wing Rapolas Ivanauskas.

Lindsey struggled with consistent playing time for the entire season. Our own David Gernon expected Lindsey to play a big part in Northwestern's wing rotation, possibly averaging up to 25-30 minutes per game. While his minutes increased, it was a modest jump from 15.1 minutes to 18.9. There were several games in which Lindsey was basically invisible, which is obviously not a good sign for his development. He failed to score more than 3 points 14 times during the season.

Lindsey certainly improved as a shooter, and when he was on, he made the most of his opportunities, but growth in his overall performance was lacking. Lindsey's scoring was great when he could make shots, like during his 26-point barrage against New Orleans, but he often looked confused and over-matched while on defense. His defense got a little better near the end of the season, but by then he had run out of time to regain his coaches' trust.

His development as a player was going to be a big part of Northwestern's success this season, especially without fellow wing Law, but he failed to live up to expectations. Perhaps those expectations were a tad lofty, but considering his potential, his lack of growth was disappointing. His job will always be to hit shots, but at times it looked like Lindsey lacked the confidence to be a primary scoring option for Northwestern. And with Tre Demps and Alex Olah leaving next year, Lindsey's lack of development is all the more concerning.