Statistically, Gavin Skelly was Northwestern's best three-point shooter. Yes, 6-foot-8, 225-pound Gavin Skelly knocked down 4 of his 9 threes, and while that's not enough shots to declare him the team's best shooter, it did represent a bigger overall theme: Skelly expanded his game in a major way in his sophomore season. He didn't even attempt a three during his freshman campaign. As Josh Rosenblat wrote earlier in March, "Gavin Skelly now has the skill to match his energy."

Skelly didn't play a ton of minutes (12.5) or score a ton of points (3.3 per game), but his ever-present energy combined with his improving overall game earned him an important niche on this year's team and sets him up to see major minutes going forward.

The following numbers are taken from kenpom.com.

Skelly led Northwestern in terms of effective field goal percentage, checking in two-tenths of a percentage higher than Dererk Pardon (64.8 to 64.6). He showed major improvement in that area when compared to his freshman campaign. Obviously the expanded range helps, but Skelly also finished around the basket much better as a sophomore too. He also got to the free throw line more often this season and knocked down over 64 percent of his freebies.

If there's anything to criticize in this department, it's that Skelly needs to get more involved on the offensive end. His usage rate actually dropped from his freshman year even with his expanded skillset. However, his 26.1 percent turnover rate is troubling. 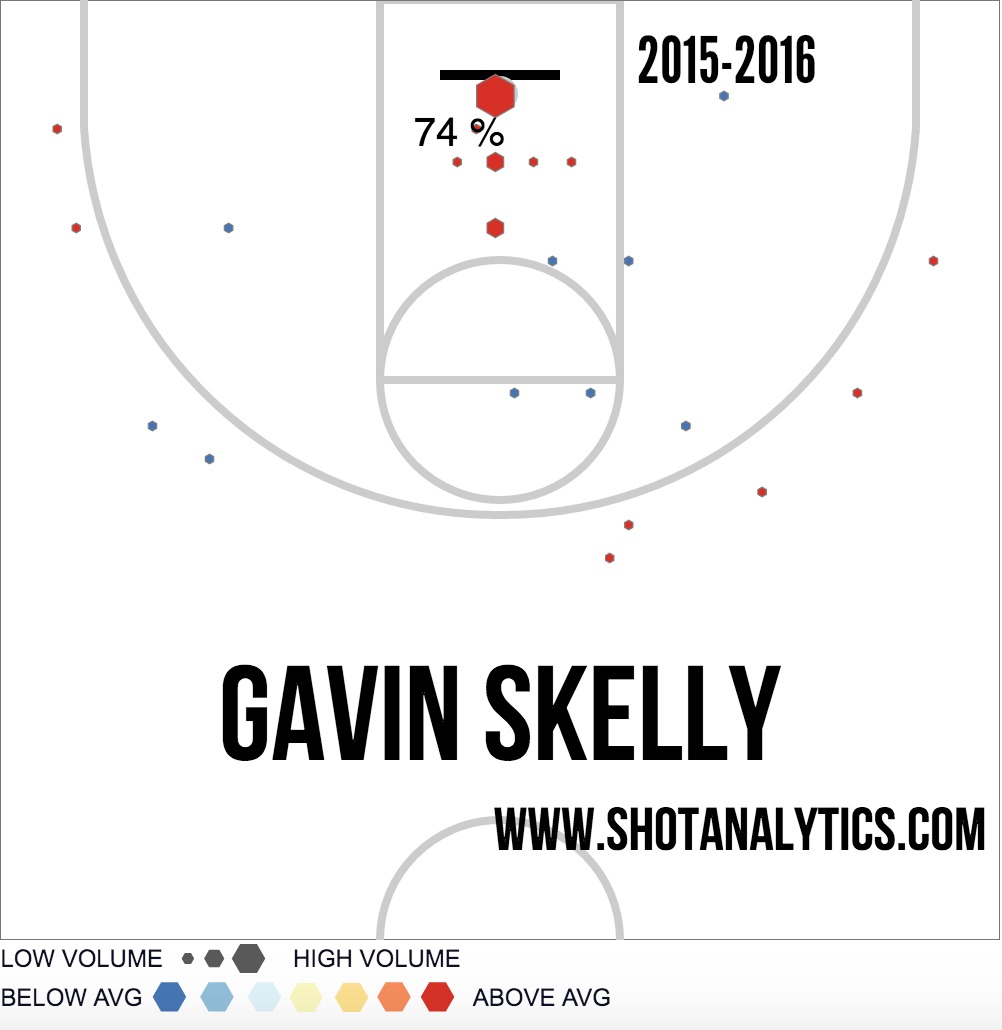 Because such a high percentage of his shots come near the basket — and he doesn't take a ton of shots — Skelly only has one area marked off in this chart, but that one area shows vast improvement: 56 percent around the basket is pretty poor, especially for a big man; 74 percent in that area, though, is very good, and it showed Skelly grew more accustomed to the size and physicality of the Big Ten this season, an encouraging sign.

As we mentioned above, Skelly's ability to knock down the three with semi-regularly — or at least the threat of him shooting it — is something that wasn't present as a freshman. Now, he has the ability to both pick-and-pop and pick-and-roll. Overall, however, the sample size is far too small to draw conclusions,

Skelly is always going to bring outstanding energy and athleticism off the bench. But he showed major improvement in several areas. He's confident to square up and hit a catch-and-shoot three. He shot better from all areas of the floor. He also got much better at drawing contact — and finishing through that contact — as a sophomore. His 83.3 free throw rate was up over thirty points from his 51.5 mark as a freshman, and he averaged 4.0 fouls drawn per 40 minutes, up from 2.9 a year ago. Knowing he needed to expand his game to be a consistent member of the rotation, Skelly did just that this year.

Skelly continues to struggle with committing fouls. He committed 6.2 fouls per 40 minutes, including three in three minutes in a loss to Penn State. He fouled out in 12 minutes against Iowa. Given his seemingly endless energy, Skelly needs to know how to reign it in at times, not bite on pump fakes and focus on going straight up instead of trying to block every shot. If he can't be counted on to play smart, foul-free defense, he'll struggle to consistently log big minutes.

It would be easy to say focus on not fouling, but interestingly enough, Skelly has a major weakness shooting the ball: the midrange. In his career at Northwestern, Skelly is 4-for-17 in that area, which is not very good. Given his ability to hit the three, it would really help Skelly to be able to also roll to the baseline and knock down a 15-footer, a shot Alex Olah got pretty often in this offense. If Skelly can add the catch-and-shoot midrange jumper to his repertoire, he'll have a pretty solid offensive game for a power forward.

Skelly is strong as an ox and has a fantastic motor and an ever-improving offensive game. He showed major improvement from last year to this year, and even over the course of the season. Still, he remains very much a limited contributor offensively — only Sanjay Lumpkin had a lower usage rate, according to Kenpom. Skelly has the skills to find a role on the offensive end, but he's not a traditional back-to-the-basket four and he's not quite considered a stretch-four yet, though if he can show this season's outside shooting was no fluke, that could change. If he finds that offensive identity and cuts down on his fouls, Skelly could have a strong next couple of seasons in Evanston.