Taphorn is one of the hardest Northwestern players to really pin down in a few paragraphs. Next year, he'll be just one of two Wildcats -- along with Sanjay Lumpkin -- that was not recruited by Chris Collins and has yet to find solid footing in Collins' system. Perhaps he was just a better fit with Bill Carmody, but there just wasn't much room in the rotation for the incoming senior down the stretch of last season. Taphorn can provide some bench scoring with his decent shooting stroke which is often overshadowed by his subpar defensive abilities.

The Pekin, Ill. native is used to missing long stretches of games -- he missed seven straight during the 2014-15 season due to injury -- and was a victim of multiple 'DNP-Coach's Decision' designations this year, mostly due to him being a defensive liability in conference play. There's still hope Taphorn can contribute as he enters his final season in Evanston but it remains in question as he spent as much of the 2015-16 campaign on bench as he did on the floor.

Taphorn's stat line is honestly just about what you would expect knowing how he was used in games this season even if some of it is skewed due to small sample size, as he only played 21.6 percent of Northwestern's minutes this year. Surprisingly this is a slight uptick from the year before, but not by much. Taphorn, even in a small role, managed to shoot on 21.6 percent of the possessions he was in the game for, which is surprisingly high for a role player. Of the shots he attempted, 77 percent were threes, which is really all he can effectively attempt on offense. While he shot for a slightly worse percentage than in 2014-15 overall, he also took and hit more threes.

But, those stats are buoyed by how he performed against lesser competition in nonconference play. In Big Ten games, he only took 19 threes (27 shots overall). Take away the Rutgers game and Taphorn was only 7-of-20 from the field. That's what happens when you don't play more than 20 minutes a game and get 7 DNPs. 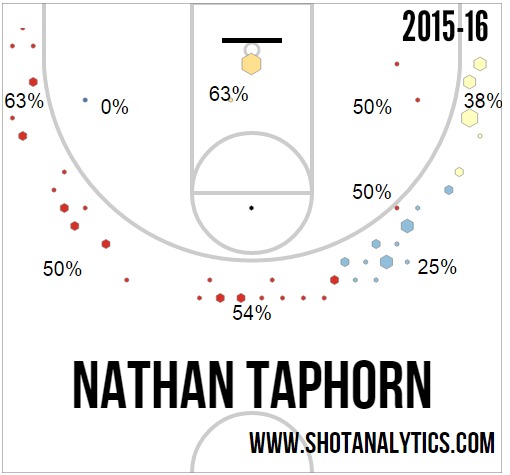 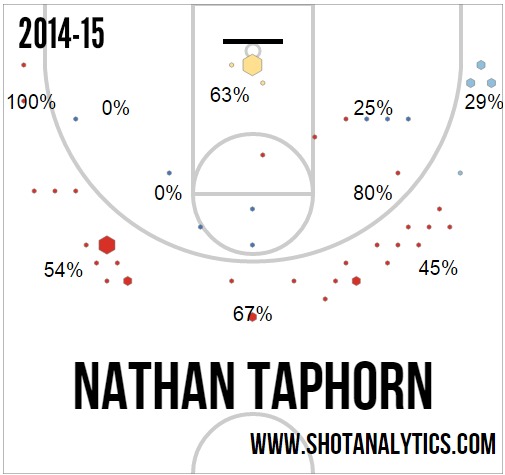 Threes, threes and more threes. It certainly shouldn't be a shock at this point, but Nate Taphorn likes to shoot three-pointers. He did last year and he still does now. What's odd here is that he appears to be a much better shooter from the left side of the arc than the right. This past season, he made 56 percent of his attempts from the left corner and wing compared to 30 percent from the right side. This proves to be a problem considering how he takes more right wing threes than any other shot.

Three-point shooting. Taphorn has proven that he can consistently makes open threes, even if he takes too many for someone of his caliber. After a very poor showing in his freshman year, Taphorn has shot 50 and 40 percent from beyond the arc respectively the last two seasons, which are numbers Chris Collins certainly will take. Being able to play as a stretch-four is Taphorn's biggest talent since he can extend opposing defenses out to the three-point line. He also can be a threat in transition at times.

The defense. This is Taphorn's most glaring weakness and is the reason why his minutes got cut so drastically down the stretch. On many occasions in key moments of games, Taphorn appeared to be lost in the 2-3 zone and unaware where he was supposed to be. He would lose an opposing player in his section of the zone and give up open threes, often followed by a substitution which sat him on the bench. Taphorn was a risk-reward play for Collins, in that Collins would roll the dice to see if Taphorn could get a three or two before making a mistake on the defensive end.

The biggest focus for Taphorn in the offseason should be improving his defensive awareness. He does not need to be a plus defender to get playing time, but he does need to improve that side of his game significantly. This does not mean playing perfectly in the zone but cutting down on the missed assignments would be a start.

Nate Taphorn's 2015-16 season will forever be characterized by getting stuck in Chris Collins' doghouse down the stretch. Taphorn had a relatively solid showing in nonconference play but once the competition picked up, his weak defensive play eventually forced him off the court. He has the shooting ability to be a key piece of Northwestern's offensive attack next year, but first he has to show that he can be trusted enough on defense to stay on the court.