Share All sharing options for: Northwestern Football Most Important Players — No. 6: Solomon Vault

At No. 6 in our Most Important Players series, we have Solomon Vault. Last season, Vault made the All-Big Ten Third Team as a return specialist as he returned two kick returns for touchdowns and established himself as one of Northwestern's greatest return specialists of all-time in just his second season. Now a junior, Vault will see his role increase as he makes the switch from running back to a full-time wide receiver. Ben Goren and Zach Wingrove debate how important of a role Vault will play in the Wildcats' success in 2016.

Ben Goren (Rank: 2): Let's talk about Solomon Vault and how wrong you are about his importance (or in your case, lack thereof) to the team this year. I think there are two or three position groups that are question marks this year, and they're all on offense. One of them is quarterback, one of them is offensive line, and the biggest one is in the wide receiver room. Northwestern's wide receivers last year were bad and most of the most productive members are leaving. I don't think anyone who played wide out last year is ready to be a gamebreaker. Austin Carr (No. 9 on this list) is a good not great possession guy who won't be making a lot of explosive plays. Flynn Nagel's a similar kind of player. Solomon Vault proved last year he can win games in the return game. He's the most likely skill position player to make big plays happen and that's why he's the second most important player on the offense this season. His ceiling is so intoxicating.

Zach Wingrove (Rank: NR): I'll start by saying I'm a big fan of Solomon Vault. I agree with you that he has explosive speed — especially in comparison to Northwestern's other receivers — and I think he can make some big plays as a kick returner, like we saw last year. My biggest reason for not ranking Vault in my Top 10 is the fact that we just don't know what to expect from him as a full-time wide receiver. Speed is an important quality to have at the receiver position but it is not the only quality that a receiver needs to have, he still must be able to run routes effectively, deal with physical cornerbacks and, most importantly, catch the ball. Vault is certainly capable of doing this, and he has had time this offseason to work on his receiving abilities; but a few months is not a lot of time for a player who didn't consistently play the position last season. There is still a lot Vault has to learn as a receiver; he has to build chemistry with Clayton Thorson, learn new routes and he will have almost zero experience playing against Big-Ten caliber cornerbacks when the season starts. These question marks make it difficult for me to put too lofty expectations on a player who moved to receiver this past off-season. In my opinion, the aspect that Northwestern's receivers need to improve most is their consistency and that's why I'd place a higher level of importance on a veteran possession receiver like Carr, who is Northwestern's top returning receiver and has also proven in the past that he's capable of making big plays.

BG: So Northwestern's offense ranked 109th in isolated points per play plus last season, which functionally measures explosiveness. You're right when you say that Vault is probably going to be a step behind his cohorts in the corps when it comes to running polished routes and creating separation with corners. But the guy has shown a decent set of hands and some decent route running. Remember this play, which was totally a catch and not a drop?

What do you think, @B1Gfootball fans: TD or no TD? The @NUFBFamily score was overturned. http://t.co/CajCRuzl95

That's not a route and catch/near catch that many running backs are able to throw down. His ability to take short passes and turn them into big gains by being shifty in space has the potential to unlock the Northwestern offense. I don't expect him to be running a lot of fly routes, but he can be an uber version of Jelani Roberts. He's going to be a danger if he gets the ball on a jet sweep, out of the backfield, in the option, on screens, on drags, and maybe the occasional wheel. Solomon Vault is the best pure athlete Northwestern is going to be running out on offense. If he isn't going to be the guy to make big plays, big plays won't happen. If that's not happening, the offense will continue to be what holds Northwestern back. That's why he's so dang important.

ZW: One thing that I think is important to remember in that play against Minnesota was the fact that Vault was being covered by a safety who was playing with no help behind him, as Ian McCafferty pointed out after the game in one of his Inside the Play breakdowns, part of which you can see below. 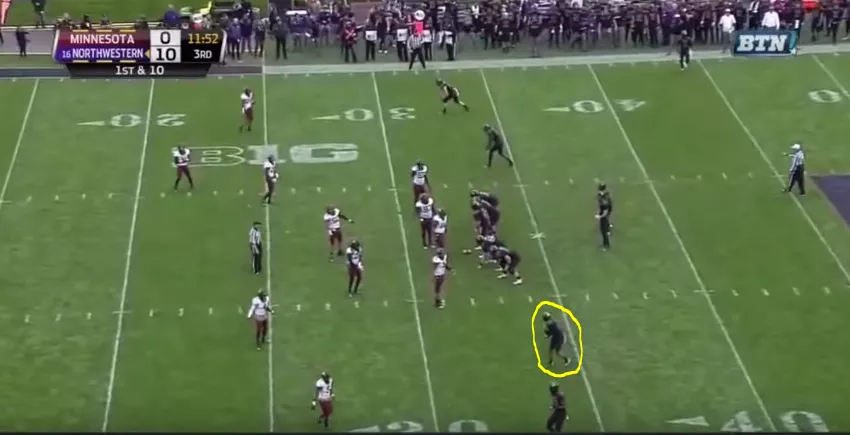 Vault did a great job adjusting/capitalizing on the mismatch that play and almost making what very well could've been the catch of the year in college football. However, I don't think he will have the luxury of facing this type of coverage on a regular basis next season because, as you noted, he is such an impressive athlete as well as Northwestern's fastest receiver. Because of this, defenses will be more likely to key in on him and have a cornerback line up against him in man coverage, or at least provide some help over the top in case Vault burns the defender covering him. If this doesn't happen at first, it will only take one big play from Vault for defenses to recognize his ability as a deep threat, at which point that team (along with future teams) will be sure to correct that.

I agree with you that Northwestern's offense could use a shot in the arm like Vault, someone with his attributes could help Mick McCall broaden the play calls and add another element to the Northwestern offense, but I think explosiveness/big plays should first take the back seat to consistency. It would be great if Northwestern could use Vault as a deep threat and be able to complete long passes regularly, but wouldn't it be more realistic to hope for reliable receivers that are capable of catching a decently thrown pass on third down in order to extend a drive? From what we saw last year, the passing game needed to improve and I think the team should first work on being able to complete short and medium passes with consistency. Vault can certainly help out with that, but it's also important to have reliable possession receivers which is why I have Carr on my list and not Vault.