Our look at teams that also haven't made the NCAA Tournament, brings us to Sacred Heart, an NEC team whose coach is terrible. According to the Wikipedia, at least.

Who: The Sacred Heart Pioneers 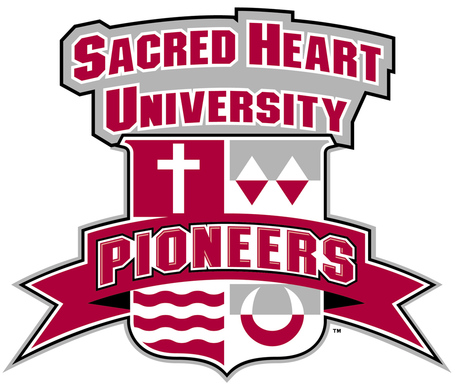 The symbol for the world's most prominent religion and the symbol for a really tough ski slope, united at last

The Pioneers finished ninth in the Northeast Conference, whose tournament only takes the top eight teams in a 12-team conference. You don't say this often about a sport played indoors, but Sacred Heart can blame the weather for their inability to even make the conference tournament: the Pioneers started out conference play 7-4, then had a game against Bryant postponed twice due to the blizzard that hit the Northeast in early February. They'd lose their last seven games and miss the NEC tournament by one game. Bummer, y'all.

If you think Bill Carmody has been around too long, Dave Bike has been the Pioneers' head coach since 1978. His Wikipedia page summarizes: 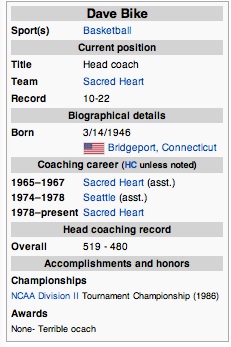 "None- Terrible coach" - Did somebody just change the channel to the USA Network? Because Dave Bike just got put on BURN NOTICE, SON. On the plus side, he has that D-II Championship to hang his hat on - how quickly we forget.

There might be changes afoot at SHU - the school recently changed its athletic director, bringing in SoP favorite Bobby Valentine to head up the department. Judging from how that worked out for the Red Sox, this will go swimmingly for the Pioneers.

Actual basketball: Props to Shane Gibson, who averaged 21.6 points for the Pioneers. Also props to De'Aires Tate for being named "De'Aires."