Florida Gulf Coast is going to their first NCAA Tournament

The first bid in the 2013 NCAA Tournament goes to a squad that's Never-Made-The-Tourney no more: , Florida Gulf Coast is going dancing after knocking off No. 1 Mercer in the Atlantic Sun Tournament - in just their second year of tournament eligibility.

Share All sharing options for: Florida Gulf Coast is going to their first NCAA Tournament

Only one bid to the 2013 NCAA Tournament has been given out, and its going to a Never-Made-The-Tourney squad: the Florida Gulf Coast Eagles are dancing.

The Eagles had a tough job - winning against No. 1 seed Mercer, who SB Nation's Craig Powers wrote were the hands-down favorites in the tourney, and doing it on the road. But they pulled it off, thanks to point guard Brett Comer. The sophomore has the No. 5 assist rate in the nation, but wasn't much of a scorer, averaging just 6.7 points per game. But he had his mind on the hoop here: putting in a season-high 21 points, most of which were in the first half. And A-Sun player showed why he got the conference's top honor, drilling threes with his dreads flapping with every emphatic celebration, finishing with 16 on 4-of-5 shooting. He nailed his first five shots of the second half, some of which were from loooooooong range.

The Eagles trailed 11-2, but some dashing dives to the hoop by Comer - and strong shooting from Bernard Thompson - got the team a 38-36 lead at the half. From there, they exploded, going on a 11-2 run of their own to start the period and pulling away after a few furious jams by Chase Fieler. The lead got as big as 17, as FGCU ended up with an 88-75 win. 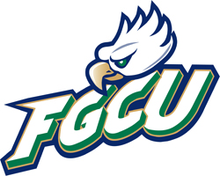 Where: Fort Myers, Florida (it's on the Gulf Coast)

If you haven't heard of FGCU, don't feel bad: hell, they just started being a school in 1997 - but they quickly decided to move up to D-I play, joining the A-Sun in 2007 and finally receiving full credit in 2011. They've done pretty well in their short time, making the Atlantic Sun championship finals in two straight years. Last year, it was as a sixth seed, getting lambasted by Belmont in the finals.

Then, this year, things started to click with Atlantic Sun player of the year Sherwood Brown and Atlantic Sun defensive player of the year Bernard Thompson - 2.9 steals a game, No. 6 steal rate in the nation - and point guard Brett Comer - No. 5 assist rate in the nation - they had some talent. They even knocked off Miami in their second game a year, a win which looks absolutely INSANE in retrospect. and went 13-5 in league play, knocking off Mercer 60-57 when they hosted them. And now they're in the tourney.

Props to head coach Andy Enfield, who has obviously done a pretty good job to make the conference finals in both of his two years in charge, and of course, to win now.

Congrats, FGCU! You're greedy, greedy, greedy jerks for ditching the club after just two years. From here on out, you're on your own.